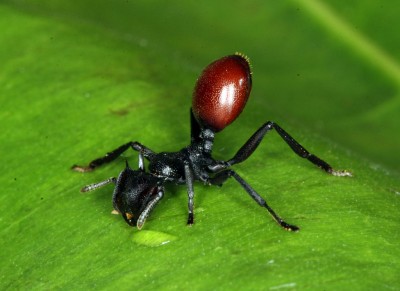 “Ha!  Ha!  Always like a puzzle.  Now then, where’s my Exeter Book of Riddles?  When it comes to puns and word-smithing one can always trust those Anglo-Saxons, although that fellow Gollum had his moments.”  Hum, hum, flick, flick, finger down the index, “Maybe an anagram?  Hand me the thesaurus?  Funny, drawing a bit of a blank.  What did you say ants? berries?  Sorry, old boy, completely stumped.  Drop more tonic …?”

Have another swig, while I explain.  It concerns an ant from the American tropics, living high in the forest, and amongst other curiosities it is wingless but can glide.  In the canopy there are also birds, and it can be a serious mistake if the ant has a nibble on their droppings.  Not because of the taste, but because they may contain parasitic nematodes.  Once swallowed the worms make their way to the end of the abdomen (the gaster), mate and then the female produces its eggs.  So far, so normal, but by absorbing nourishment from the exoskeleton the cuticle thins (but not too much to fatally weaken it) and changes colour, from black to an attractive red.  But that is not all the parasite achieves.  The ant’s behaviour goes off-piste.  Not only is it much less aggressive than usual, but it holds the “berry” up in the air.  Fruit-eating birds are attracted to the berry mimic, down goes the ant and life goes on – at least for the nematode.

Nobody doubts humans have free-will, or do they?  See what happens when a parasite first invades and then grabs the steering wheel and accelerator.  Volition goes out of the window and the host is turned into a zombie.  The key step is to hi-jack the command centres, perhaps by subverting the immune system, releasing neurotransmitters or even taking up residence in the brain itself.  With the parasite at the controls, a variety of gruesome options present themselves.  The infected host may swell alarmingly, engage in manic activity, or alternatively freeze into immobility.  Sooner or later, however, the parasite must move on if it is going to complete its life cycle and thereby make somebody else’s life miserable.

Exit strategies vary.  To gain freedom the host may see its head drop off, burst through the body like an alien, or simply deliquesce into a sticky goo.  Or what about just drowning your host?  This happens when parasitic hairworms (nematomorphs, relatives of the nematodes) give their marching orders to crickets to wander around erratically until sooner or later they approach a stream where they jump in and commit “suicide”.  Tough on the cricket, but when hairworms have to complete their life-cycle in water that’s the way it must be.  A similar fate awaits an ant from Papua New Guinea.  This time it is a nematode that provokes the mischief, compelling its victim to strike out from the shore (well, a small pool).  If rescued, the victim promptly turns back and before long it, but not the nematode, drowns.  And even if the parasite has left the host it can still meddle, instructing the host to serve as a bodyguard for their vulnerable young.  Parasitized caterpillars turn into aggressive assailants, sending would-be attackers flying, while spiders are induced to spin protective cocoons of silk for their “guests”.

However macabre every story is an adaptive tour-de-force.  If, for example, tropical ants manage to avoid being turned into pseudo-berries, then at least one fungus (Ophiocordyceps) should make them shudder.  Once infected, the ant is directed to a precise location (25 cm up, north-west facing, please) on the plant.  This is not to enjoy the view, but because this fungal parasite is pernickety, demanding an optimal temperature and humidity.  Once checked-in, the mandibles of the dying ant grip the leaf, so powerfully that equivalent scars can be identified in 50 Ma-old fossils.  An elongate stalk then protrudes from the head and develops a capsule that splitting open wafts the spores towards the next victim.  In another species (a carpenter ant) zombification results when a so-called “brain worm” (parasitologists know all about flukes) lodges itself conveniently adjacent to the root of the mandibular nerve.  Once again the ant is transformed into an automaton, climbing the plant, engaging in a death-grip before a passing herbivore sweeps grass, ant and parasite into its gut.  Putting your host in danger’s way is par for the course.  When fluke-worms (trematodes) infest marine cockles, their digging foot shrivels.  Unable to burrow, shore-birds and other hungry animals move in.

In this Darwinian chamber of horrors, who takes the biscuit, or rather the cockroach?  Fly forward the jewel wasp.  Relatives of the ichneumons, this wasp uses its ovipositor to deliver a short shot of venom.  The wasp then strolls off to find a nest, while in her absence the cockroach engages in furious grooming, maybe to remove potentially dangerous microbes.  Returning the wasp plunges the ovipositor into the brain of her host, using on-board monitors to precisely target particular ganglia.  Heavy work and feeling peckish the wasp nips off an antenna and imitates Count Dracula.  The cockroach can freely walk but having surrendered all self-motivation the zombified victim is led to the sacrificial site.  Here an egg is attached, and no prizes what happens next.  There is, however, another twist because as the larva munches its way through its home it secretes anti-microbial droplets to keep pathogens at bay.

One might take solace that at least the contest is between animals with nervous systems, even though fungi can also seize the reins.  But surely not a virus?  Unfortunately so.  Sometimes the parasite uses a virus for its own devious ends.  Other times the virus manages solo.  When a corn earworm moth is infected, the virus heads for the reproductive tissue.  The only way forward is for boy to meet girl.  With the latter pumping out sex pheromones to staggeringly high levels and radiating other come-hither signals it would be churlish for a chap to decline the invitation.  Alas, it is all a wasted journey.  The female is sterile and anycase access is blocked by a viral plug.

Still the male doesn’t leave entirely empty-handed.  In crickets an iridovirus serves as an enticing but dangerous aphrodisiac, while caterpillars infected with a baculovirus actively scurry to the top of plants, before turning into infective puddles.  Should we see these hijackings as anything more than exquisite adaptive stories or at a subterranean level is our belief in free-will beginning to crumble?  Tricky, so let’s conclude with a salutary tale.  Did you know that roughly one in three humans are infected with a little horror known as Toxoplasma (the malarial Plasmodium is related).  Cats are the main vector because Toxoplasma finds their guts an ideal place to have sex.  When not devouring song-birds, in their spare time cats hunt rats.  The latter strongly disapprove of this, but should their brains be full of Toxoplasma then a strong aversion to the smell of cat pee is subverted and caution replaced by an entirely misplaced fearlessness.  In humans Toxoplasma lurks in various tissues, especially the brain, and there are intriguing similarities between toxoplasmosis and symptoms of schizophrenia.  The link is suggestive, not proven, but maybe this way madness lies?