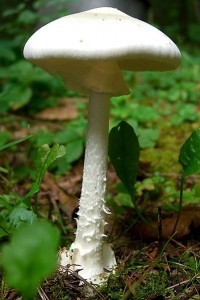 No! Mushrooms may be delicious, but in the cold light of biology they are simply the fruiting bodies of fungi. Like plants fungi may live in the ground but unlike them they neither form flowers nor are they able to photosynthesize. Rather they are like us in as much as they obtain food rather than making it. In the trade we and fungi are known as heterotrophs, digesting complex compounds in order to fuel our respective existences. We use stomachs. In contrast fungi absorb their food through the cells that ramify through the soil as a mycelium and occasionally erupt from their subterranean existence as a mushroom. So fungi are certainly heterotrophs, but forget the paraphernalia of the dining table. Static and brainless, to think of fungi as being able to hunt is ludicrous. Next question!

Fungi such as the lethal Amanita (aptly known as the destroying angel) may inadvertently send you to the next world using its potent toxins, but fungi have found other ways to dispatch their prey. In the soil not only do fungi extend their mycelial webs – sometimes across vast areas – but their life is shared with a thriving fauna of nematodes, tiny arthropods and other creatures. All eminently digestible, providing that is that somehow they can be trapped. And that is exactly what some fungi have succeeded in doing. One way is to produce spiny balls that rip open the cuticle of passing nematodes and introduce a dose of toxins. Other fungi have turned to adhesive traps, consisting of either projecting knobs or nets.

Most astonishing, however, are those fungi that make a lasso, specifically a ring composed of three cells. The unwary nematode swims into the noose and in a tenth of a second it swells and the throttling begins. Now the leisurely process of digestion can begin, assisted by enzymes much like those we employ. Evidently the nematode activates touch-sensors that signal the cells to inflate with water. This will involve the process of osmosis, but in addition the expansion is assisted by an ingenious unfolding of the cell wall. All very clever, but like all hunting the rate of success is seldom one hundred percent. Nematodes also are equipped with a touch-sensitive area located near their front-end; entering the noose they quickly realize that this is no place to linger. So as its prey slips away the fungus has to wait a little longer for a less wary customer. 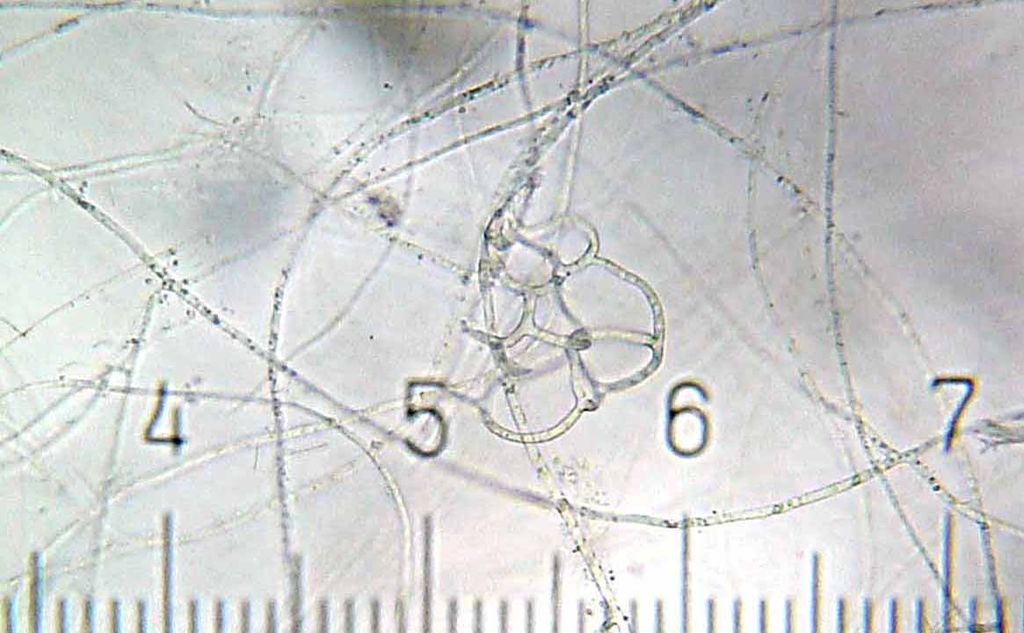 Arthrobotrys is a nematophagous fungus (a fungus which has developed the means to trap nematodes). In this magnified image you can see the adhesive nets used by the fungi to trap an unsuspecting worm... more. Numbered ticks are 122 µm apart (Image: Bob Blaylock/Wikimedia Commons)

Here is an object lesson in evolution. For all life nitrogen is an essential. When it is in short supply then fungi turn to meat, as do carnivorous plants. In this context the venus-fly trap is perhaps the most familiar but routes to a sticky-end (sundews) and drowning (pitcher plants) show plants in a more murderous mode. And one plant (Philcoxia) takes its cue from the fungi because it too can trap nematodes, not by using a lasso but on its underground leaves. In the case of the fungi dinner is announced not by the butler’s gong, but from molecules known as ascarosides. These are essential for nematode biochemistry but as they leak into the soil so the presence of nematodes is signalled to the fungi who then promptly start constructing their traps.

It is, of course, too good a trick to have evolved only once, and convergent examples of fungal lassos can even be seen in Cretaceous amber. The ability of the fungus not only to “smell” the ascarosides but to employ a tactile response as the nematode enters the trap also remind us that you don’t need a nervous system to make decisions. And in this strange underground world of the hunted and the hunters there can be other players, in the form of bacteria. And how do they enter the picture? Nematodes enjoy eating bacteria which the latter find rather tiresome. So why not let the nearby fungi know that it would be greatly appreciated if they could start building traps to eliminate these pesky creatures. The bacteria release a chemical signal in the form of urea that acts in an analogous manner to the ascarosides. Once it enters the fungi and is then converted to ammonia it serves to unleash the fungal armoury.

No doubt this is all very interesting, but isn’t this a little arcane? Typical stuff of boffins, beavering away and remaining blissfully unaware of the “real” world out there? Not at all, because there is a practical side to all this. Nematodes such as various species of cyst- and root-knot worms are a major agricultural scourge. Analogues to the insecticides, in the form of nematicides, are widely used. They may be effective, but unfortunately some are highly toxic. An alternative is to recruit the hunting fungi and then wait for the quiet strangulation of the pest.

No, don’t be ridiculous What’s that phallic-looking object, its surface agreeably viscid, doing as it provokingly points upwards towards the…