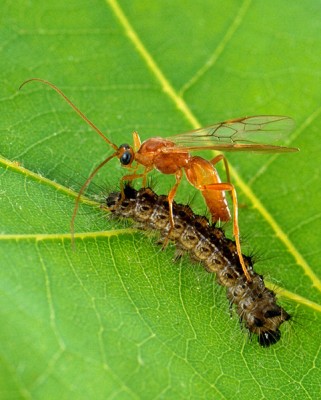 What is this I see approaching? A cockroach waving a spanner, and close behind a column of termites kitted out with screw-drivers, while just visible through the dust a sturdy stagbeetle complete with power-drill? Pure fantasy; it is about as likely as a fly riding a bicycle. Nobody is disputing that insects such as ants perform impressive feats: weaving with silk, building bridges composed of their own bodies, even herding aphids, but I am afraid tool use is a step too far. After all the bar is set high. Tools imply both a capacity for precise manipulation and a big enough brain to avoid cognitive overload. This is a territory forever denied to insects.

Think again! The evolutionary definition of a tool extends far beyond spanners and the like. Key are concepts such as “ability to manipulate” and “employment of an external and inanimate object”, as well as “the capacity to modify with permanent effect”. Seen this way the range of potential tools suddenly becomes much wider. Insects may not actually craft tools, but they certainly employ them to effective ends. Consider the parasitic wasps, the kind of insect that horrified Darwin. And with good reason, given their unsavoury habit of the female laying her eggs in a paralyzed caterpillar whose brood once hatched then munch their way through a host with an extended shelf-life.

To prevent anybody else short-circuiting this grisly life-cycle, she parks the caterpillar in a burrow and as an added precaution takes care to conceal the entrance. In this cleaning-up process most wasps simply use their bodies, but not Ammophila. First she finds a convenient pebble; then grasping it securely in the mandibles she proceeds to tamp down the backfill. Nor are these wasps the only insects to deliberately plug burrows. The world of ants is pretty competitive, especially if the other species are busy scouring the same terrain for valuable resources such as grass seeds.

To steal a march on your competitors why not employ dedicated sappers? They specialize in intimidation and also engage in fighting the opposition in a style that would do credit to the Iliad. If that approach fails then the next step is to block the enemy burrow with soil and other rubbish. Chucking boulders – well, small ones – finds a use in another species of ant that bombards ground-nesting bees. Resistance is useless as they say, and the bee usually emerges from the burrow much the worse for wear before succumbing and being carted off to the ants’ nest. But the arm of competition spreads further. In the race for resources tools, such as friable soil or plant fragments, can be used to soak up nutritious fluids (and water). Not only does this ensure a rapid transit to the nest but it comes in handy in those ants that lack the capacity to engorge the anterior gut (the crop) and on arrival at the nest engage in what the specialist terms trophallaxis. Who knows, maybe food delivered on a leaf is nicer than being regurgitated?

Nobody imagines insect tool use is on a par with chimpanzees termite-fishing or New Caledonian crows crafting probes to extract juicy beetle grubs. The principles, however, are much the same and revolve around cornering resources. But tool use also implies cognitive sophistication and here we enter uncertain territory. Certainly tool use is sporadic and many intelligent animals get by unaided.

So too lack of hands would seem a definite disadvantage, until that is we look at the dolphins cruising around Shark Bay in western Australia. Attaching a conical sponge to the sharp end (the rostrum) allows the dolphins rummage in the sea-floor of the deeper channels in search of such delicacies as the Barred sandperch. At first sight this is rather odd given dolphins usually hunt such prey using exquisitely tuned echolocation. This natural sonar, however, depends on acoustic echoes that are much diminished if the prey lacks a gas-filled swim-bladder. Poking your nose in sharp rubble bristling with venomous creatures makes donning a glove a nifty idea. Interestingly, it is mostly the females that use these tools and in the best of traditions they pass on the knack to their daughters.

Such cultural transmission is part and parcel of being smart, so how do insects rate on the cognitive scale? Insects may have tiny brains, relying on one neuron for every hundred thousand of ours, but tool use is only one aspect of an impressive repertoirè of behaviours that hint how far beyond the vertebrates independently another mind is stirring. Consider insects such as the honeybees and ants. Take a physical object, say a flower. Recognizing it is unremarkable. But in moving beyond categories (“this is a flower”) to inter-relationships that serve to define concepts (“this is the flower my girl-friend likes”), then one moves towards abstractions that are not for the cognitively faint-hearted. So with honeybees. Here concepts such as same/different or up/down provide portals to new worlds, which in the case of bees finds an unexpected application in as much as they can be trained to distinguish the paintings of Monet and Picasso. This doesn’t mean they are all set to join the queue outside the Prado, but is one line of evidence to show that not only can bees recognize concepts but even manage to combine different categories such as spatial (up/down) and visual (abstract/colour).

So too social wasps can recognize each other’s faces, while ants can teach (in so-called tandem-running), anticipate the future (using latent memory) or navigate with a degree of precision that hints at an internal monologue “Now then, let’s see, ah yes, here’s the path …”. The wider implications are intriguing. Do some insects really have a mind? If so, are those of insects and other animals all of a kind, or are there many different cognitive landscapes? Even more alarmingly, dare we ask if some are more akin to those of extraterrestrials?

John Frere was a British antiquary. He was the first person to systematically describe and make public the discovery of Palaeolithic stone tools known as ‘handaxes’ in 1800.