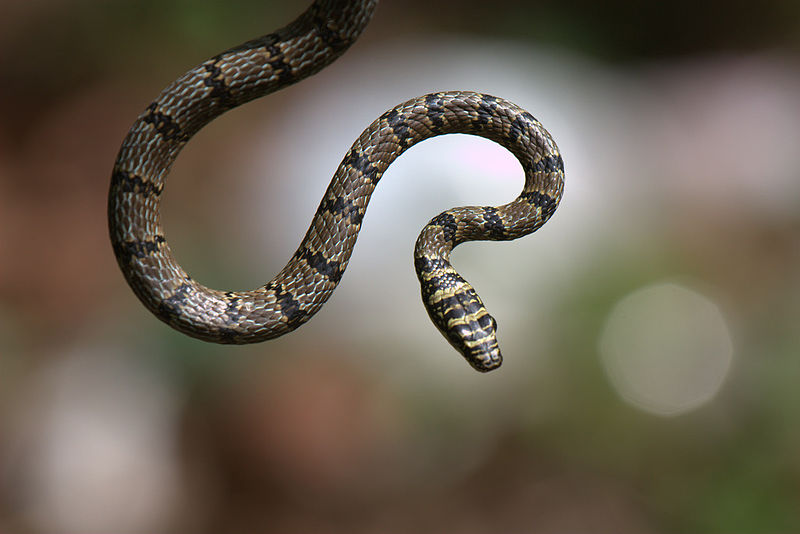 Jungles spring plenty of surprises, but perhaps none so strange as the paradise tree snake (Chrysopelea), widely found across south-east Asia. Watch what it does. First it dangles from the branch – often in a sort of J-shape – then jumps off and after a short drop, starts a long glide. If necessary turning manoeuvres are performed to avoid any obstacles before the snake arrives safely on the ground, tail first. So how does it do it? To fly you certainly need to be aerodynamic but there are alternatives to wings. Surprisingly other shapes, far from streamlined and known as bluff bodies (where the drag induced by pressure dominates over frictional drag), can provide sufficient lift to ensure a controlled descent.

The trick the tree snake adopts is to extend its body to form an approximately triangular cross-section, with the underside forming a sort of hollow flanked by short prongs. Not only does this arrangement work, but just as normal wings have a leading edge and a trailing edge, so the wide undulations result in much of the body providing an aerodynamic surface and as the series of serpentine waves pass towards the tail so leading and trailing edges continuously swop over. Is the conversion of a snake into a glider one of those eye-popping transitions that shakes one’s faith in mainstream Darwinism? Hardly. In the tree snake flattening of the body is achieved by extending the ribs, but this is a trick other snakes have learnt. Think of the ominous hood of a cobra, but widening the body also comes in handy when it comes to burrowing or for the matter soaking up the sunshine on a chilly morning.

To see a snake glide may raise some eye-brows, but as a cheap and easy means of getting from A to B it has evolved so many times as to be unremarkable. Even in the Permian reptiles were soaring between the trees, while today lizards like the flying dragon (Draco) and some geckos (Ptychozoon) are skilled gliders. Mammals like the flying squirrel and marsupial counterparts like the sugar glider are also aerodynamically adept, but their predecessors such as the Mesozoic Volaticotherium swept silently above the heads of snoozing dinosaurs. Add to this roster gliding fish, squid and frogs and perhaps it is now time to lower those eye-brows? Not quite. Many ants are arboreal and by mischance (oophs, silly me …) or intention (being chased) may lose their footing. Their body mass is so small that the dangers of impact are negligible, but on the other hand the reception committee on the ground may subject the aerial visitor to some rough handling. The solution is to glide to safety, preferably landing on a tree-trunk well clear of any danger zone. It is a strategy that has evolved independently, both in the neo-tropical forests and in those of Africa. Some ants descend headfirst, others gaster-first, but either way if gliding snakes strain the imagination then these insects might be dismissed as the nearest thing to a flying brick. But no, they adopt a posture that not only ensures a controlled descent, not least in terms of glide angle, to a chosen point but scaled up this would be the equivalent of us taking a glide path 5 km long. Curiously excising different parts of the anatomy often isn’t too deleterious. Chopping off the gaster makes little difference, but removing the hind-legs is much less advisable.

What about other tree-dwelling arthropods, such as the arachnids? By and large they fall rather than glide, but with one conspicuous exception, a large spider that inhabits the canopy of Neotropical forests. Men with beards call them Selenops, but their nickname of “flatties” is one clue to a capacity for controlled descent, head-first and with outstretched legs to steer towards a convenient tree. Even those insects that simply fall rather than glide show behaviours that are far from passive. Introduce a whiff of dog-breath, well actually the snuffling of a goat or some other ravenous herbivore that is about to devour the plant, and the resident aphids rain downwards to safety rather than staying put to provide an inadvertent protein supplement. As the aphids descend, and in the same way as a defenestrated cat (do not try this at home), so the insects rotate in the air to ensure a safe landing before strolling off to start sucking the vital juices out of yet another plant.

No, don’t be ridiculous Hardly recommended. Deprived of food a human might survive for weeks, but stick to water and…

Can you have blue blood?

Yes, of course Only if there is something seriously wrong with you. Either you are suffering from delusions of grandeur:…