Do animals use cosmetics? 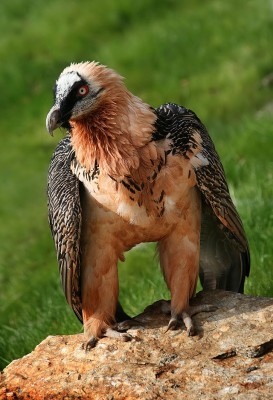 The rust-coloured feathers on this bearded vulture (Gypaetus barbatus) are likely to come from dust-bathing or from the bird intentionally rubbing mud on its body (Image: Wikimedia Commons)

Animals aren’t stupid. When asked bees can distinguish Picasso from Monet. Talking of art, not only do male bowerbirds construct elaborate bowers to entice visiting females, but in the case of the Great bowerbird even employ illusions of perspective. Satin bowerbirds go one better and use wads of bark as paint-brushes to spruce up their sexual theatres. So too elephants – albeit with some encouragement – produce paintings, but heck! the notion of animals using cosmetics is too ludicrous to contemplate. To begin with almost without exception animals cannot recognize themselves in mirrors, and amongst the handful that can elephants and dolphins are hardly likely to go rummaging around for the powder-puff, are they? Anycase, why bother?

Many animals are moving pieces of techni-colour, not least the gorgeous birds. Pigmented plumage (often using carotenoids), or sometimes ingeniously layered skin that generates so-called structural colours, serve to provide stunning displays. So too the vivid face of the mandrill and blue scrotum of the vervet monkey remind us that when it comes to mammals the primates are masters of the chromatic. Animal colouration finds multiple functions, from camouflage to warnings and status, not to mention sexual signalling as often as not accompanied by highly suggestive swellings. In this riot of colour cosmetics are surely superfluous.

Not if you are a bearded vulture. Not only do they plaster their bodies with iron oxides, but the birds are very cagey as to the precise locations where they obtain these precious red pigments. But why go to all this bother? Conceivably the dust has anti-bacterial properties, but the more likely explanation is that daubed with these cosmetics the vulture radiates alpha status, reinforcing the penetrating stare of its red eyes. Given their bony diet is poor in carotenoids, conceivably a dusting of ferruginous powder is the next best thing.

To provide the necessary pigments most often the carotenoids are obtained from the food eaten, although the yellow-faced vulture goes to extremes by nibbling ungulate faeces to obtain the necessary colouration. Needs must, I suppose, but avian beauty can also be enhanced by smearing oily secretions derived from a special organ located close to the cloaca, the uropygidial gland. The net result, more shiny or colourful plumage, is not only more waterproof but also sends compelling signals when it comes to the mating game. Nor is the effort wasted. Only the fittest can afford repeated anointment of top-quality cosmetics and the results show.

Consider the Red knots, migratory shore-birds that use the Arctic as their breeding grounds. Preening feathers with secretions much enhances appearances, but in comparison to the monoester waxes applied in warmer climes the chemical composition used in the chilly Arctic summer seems completely topsy-turvy. This is because this diester wax has a higher molecular weight and so is much stickier and more difficult to apply. And that is precisely the point: only the fittest can bear the costs and unlike some nooks and corners of sexual attraction there is no leeway for dishonesty.

Animal cosmetics, therefore, are a valuable addition to the social and sexual arsenals. And so too with humans, especially when it comes to seeing red. Football teams sporting red shirts win more often, while cardinal red says it all when it comes to high status males. On the other side, as women approach peak fertility red is more often worn, whilst if you choose to visit websites dedicated to casual sex (not that I recommend it) then once again the signal is often red.

In many different ways the colour red seems to take priority. But humans are trichromatic, so what’s so special about this colour? Is it an echo of our fruit-gathering days in Pliocene Africa, with gifts of food and so favours grumpily with-held … or deliciously proffered? Again red can be ambiguous, signalling palatability or alternatively extreme danger. In any event no completely convincing explanation exists, but what is not in doubt is that for at least the last 250,000 years various sorts of iron oxide – collectively the ochres – have caught not only our imagination but also our close cousins such as the Neanderthals.

Finding lumps of ferruginous rock in an archaeological site is all very well, but nailing their uses can be more tricky. Certainly one hundred thousand-year-old tool-kits from South Africa show that methods of preparation were very sophisticated and conveniently the softer types of ochre can be readily pulverized. Use for body ornamentation is a near certainty, but the versatility of ochre use extends beyond a range of colours to tanning hides and hafting weapons. Here the combination of waxes, resins and ochre provide a powerful bond to anchor securely the killing tip to the shaft. Nor should we try to classify ochre use in terms of either/or, functional/symbolic, utilitarian/decorative. Weapons are designed to kill, but also often play a central part of ritual. So we should think in terms of positive feedbacks.

Together these help to drive cultural evolution, enlarge brains, extend social networks, and facilitate ever-more articulate language. To our astonishment completely new worlds begin to open, unexpected vistas that lead to music, poetry and mathematics. Interestingly, food, especially sea-food, and ochre could in tandem provide a crucial link between all these facets of accelerating human evolution. First, it is probably no coincidence that not only are sea-shells often found in association with ochre but also maybe decorated with this pigment. Next, another likely use of ochre, accidental or otherwise, was not only as a medicine, but once ingested would help to ward off iron-deficiencies such as anaemia. Such, of course, is a particular risk to the pregnant. So where does sea-food come in? Not only is it easy to collect along the shore-lines but marine animals are often rich in compounds such as the DHAs (docosahexaenoic fatty acids) that are vital for brain development.

It is a sort of virtuous circle; multi-purpose ochre and brain food combine to fuel the human experiment. It is a neat hypothesis, and when combined with the painstaking work of archaeologists we are offered tantalizing glimpses into our vanished pasts. But to visit these lost worlds we always need imagination. So let us step back in time. Dusk has fallen and after the feasting the men and women adorn themselves before dancing late into the night beneath the Pleistocene stars.

John Frere was a British antiquary. He was the first person to systematically describe and make public the discovery of Palaeolithic stone tools known as ‘handaxes’ in 1800.