Is the ichneumon beautiful? 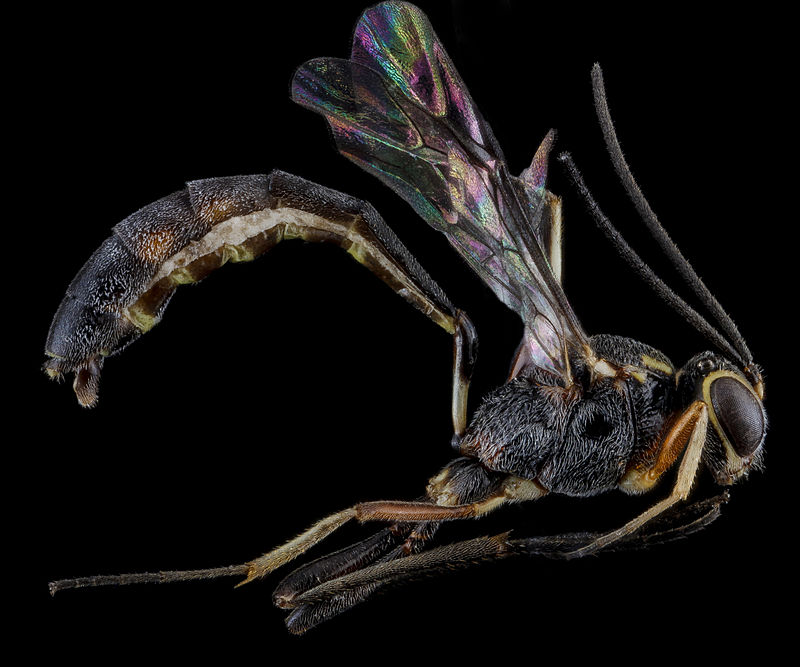 The old man was deeply troubled. Beyond his book-lined study the apparently peaceful scene masked a world of unrestricted savagery.  Once, on a sunny morning, he had written how in the struggle for existence “no fear is felt … death is generally prompt [while] the vigorous, the healthy, and the happy survive and multiply”.  Now he knew this consolatory passage to be bogus.  A benevolent Universe?  Not in the grave-yard of Malvern Priory, nor for that matter in the remorseless activity of that little horror, the ichneumon-fly.  Actually a wasp, the female employs the ovipositor first to paralyze the host (typically grub or caterpillar) and then to lay her eggs.  Hatching they proceed to consume their living home from the inside, ultimately to erupt to freedom and so complete a life cycle of imposed agony.  Is this insect a totem of existentialist despair or actually a thing of austere beauty?  From stroking his beard, the man let his fingers drum on the desk, but eyes once glittering with scientific curiosity had long since faded.  The small gravestone, inscribed Anne Elizabeth Darwin, was the metaphysical ichneumon that had drilled her father’s heart.

Blind the watchmaker may be, but the ichneumon remains a near-miracle of biological order as she seeks a deeply buried prey. Immobile and invisible how can the ichneumon ever locate the concealed grub?  In order to “see”, the female ichneumon runs across the tree, tapping its surface with a hammer-like antenna.  It is a sort of sonar; as the returning vibrations travel up the ichneumon’s front legs they are channelled to a complex array of mechano-sensors that dispatch the news to the brain.  Target identified, drilling commences.  Even if much of the ovipositor is coiled inside the body or when free guided along a groove, its extreme length (up to 14 cm) and thinness (hence the risk of buckling, but essential to minimize friction) represent a major challenge.  But the optimal vertical position of the ovipositor is facilitated by elongate legs and an arching of the body using the “wasp-waist” (it was this invention that then gave the wasps a decisive advantage in many other evolutionary spheres).  With predators hovering in attendance, drilling needs to be as speedy as possible, but hours of effort are typical.  If, however, the tip of the ovipositor was not equipped with cutting teeth and more astonishingly reinforced with substantial quantities of metal (often zinc, sometimes manganese) the process would be much slower.

The ovipositor is also cunningly constructed, consisting of three inter-locking units that channel first paralytic toxins and subsequently the eggs.  During the cutting process they neatly slide past each other, but successful interception with the grub demands precise navigation.  The controlling muscles are housed in the insect body, but the ovipositor is flexible and is also equipped with mechanical sensors that detect the smallest displacements and chemical “sniffers” to seek out the prey.  An exquisite system, but surely only of interest to biologists?  Not in the future.  Clinical investigations have revealed a brain tumour, inaccessible to orthodox surgery.  The surgeon opens the patient’s skull and places the needle-thin probe in position.  It is a wonder of engineering, but its direct inspiration is the ichneumon ovipositor.  Robotically it navigates precisely to the centre of the cancer and sets about its destruction.  Millions of miles from the operating theatre an unmanned vehicle arrives on a remote moon.  Deep beneath the surface life may lurk, but how to find out?  Flaps open, a robotic arm extends, and the ichneumon mimic drills deep into the ice.  This moon lacks an atmosphere and meanwhile other instruments survey the glittering stars.

Composed of stardust, our first birth was in the cataclysms of supernovae. Much is made of the strange coincidences that guarantee a universe rich in carbon, but about a quarter of the Periodic Table is essential for life.  Some elements are obvious (nitrogen, oxygen, phosphorous, potassium and so on), but what about silicon?  Employed by single-celled organisms (such as the photosynthetic diatoms) and in plants like grasses (as phytoliths) at first sight animals eschew this element.  In fact, sponges construct exquisite siliceous skeletons, and curiously silicon plays a key role in the first stages of bone formation.  But this element finds more unexpected employment.

Take a moment to consider the fate of diatoms as they encounter copepods in the freezing waters near Antarctica, or for that matter deep in the waters of Lake Baikal where their counterparts in the form of amphipods roam.  Each have mandibles equipped with a thin but extremely tough capping of silica (a sort of quartz known as α-cristobalite).  The diatoms may possess an ingeniously designed crush-resistant skeleton, but it is out-classed by these crustacean teeth.  Teeth come in all shapes and sizes but they are united in their ability to combine strength with flexibility.  How do the quartz jaws of copepods manage?  Their ingenious solution is to incorporate pads of a natural elastic (the protein resilin, also widely used by insects).  While these animals play the Rock-Scissor-Paper game with silica, other animals turn to metals.  Seldom as crystalline masses, but usually cross-linked with amino-acids (histidine is a favourite) and a halogen (often chlorine).  If ovipositors can brandish zinc tips, so scorpion stings and spider fangs are similarly hardened.  As leaf-cutters ants gather their harvest, termites chew their way through dry wood, and beetles infest stores full of beans, they too employ razor-sharp, zinc-impregnated mandibles.  Out to sea voracious bristle-worms and hunting arrow-worms deliver death with either zinc-tipped teeth or as alternatives manganese and even copper.

And what about that de rigeur accompaniment to any decent horror film, the brute with steel teeth?  Can nature oblige?  In vertebrates red coloured teeth do not point to appalling dental hygiene but the weaving of substantial quantities of iron into the enamel.  Enhancing hardness (and perhaps resistance to acids) animals as diverse as fish (are you surprised these include piranhas?) and salamanders, as well as shrews (famous for their voracious appetites) and other mammals (including gnawing rodents and their extinct avatars, the multituberculates) have taken the ferrous option.  But perhaps the nearest thing to a natural iron file is found in the ribbon of teeth (biologists cheer at the name radula, but Caesar meant a scraper) that enables molluscs like the limpet and chiton to rasp rocks draped with nutritious algae and bacteria.  Using a template of chitin each tooth forms an exceptionally strong cap of iron oxides (goethite in limpets, magnetite in chitons) situated above a less tough but still mineralized core that includes phosphates and silica.  It sounds simple, until you look at the nano-structures.  Exquisite arrangements of rods and fibres confer immense strength with resilience.  Given the greater hardness of the leading edge as against the trailing margin, each tooth is also conveniently self-sharpening.  Across the planet ovipositors and teeth deliver death and impose destruction, but take a moment to admire their exquisite engineering.  Very dangerous, but also beautiful.