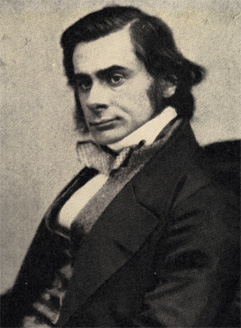 Thomas Henry Huxley (1825-1895) was an English biologist who also carried out research in the fields of palaeontology and marine zoology. He acquired the nickname ‘Darwin’s Bulldog’ because of his vociferous defence of Charles Darwin’s theory of evolution by natural selection.

However, Huxley was a pioneering biologist in his own right; he was a leading expert on reptile fossils, an excellent anatomist, a fine illustrator and one of the key intellectual figures of the nineteenth century. He coined the word ‘agnostic’ to describe people such as himself who believed that it is not possible to know whether a deity exists or not. As a child, Huxley received only two years of formal education, and was largely self-taught in the sciences, history, philosophy and German.

Charles Darwin’s On the Origin of Species was published in 1859, and soon after in June, 1860 the British Association for the Advancement of Science met in Oxford. The ensuing debate between Huxley and Samuel Wilberforce, Bishop of Oxford, became the stuff of legend and – as succinctly described by John Hedley Brooke (1991) – the idea that it represents an absolute polarisation of views is far too simplistic. Nevertheless, all those debating were of high intelligence, saw what was at stake if Darwin’s views proved correct, and were not shy of a rhetorical flourish. Wilberforce was fiercely opposed to the idea that species change through time, although his view was not based on untutored ignorance but rather a view that Darwin’s hypothesis was flawed. Nor, it needs to be emphasised, was Wilberforce alone in this regard.

Significantly, however, this debate was also attended by another opponent to Darwin’s theory of evolution, the eminent palaeontologist Richard Owen. Owen coached Wilberforce prior to the debate in order to strengthen his case against Huxley. Quite what was said in the famous exchange of views is now a matter of legend, but it seems that in an attempt to ridicule Huxley, Wilberforce asked if he was descended from an ape on his mother’s or father’s side. Huxley responded by saying that he was not ashamed to have a monkey for his ancestor, but that he would be ashamed to be connected with a man who used great gifts to obscure the truth. 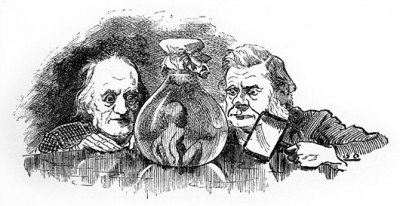 The professional rivalry between Thomas Huxley and Richard Owen was so well known during their time that the writer Charles Kingsley made reference to it in his classic children’s book The Water Babies, published ... morein 1863. In this illustration from the 1885 edition, drawn by Linley Sambourne, we see Richard Owen (left) and Thomas Huxley examining a water-baby: “But they would have put it [the water baby] into spirits, or into the Illustrated News, or perhaps cut it into halves, poor dear little thing, and sent one to Professor Owen, and one to Professor Huxley, to see what they would each say about it.” (Kingsley, 1889, p.69) (Image by Linley Sambourne via Wikimedia Commons)

As an afterword to the Huxley-Wilberforce altercation, a little known fact – brought to light in 1980 by Harvard-based biological anthropologist Professor Richard Wrangham  – is that there is evidence to suggest that Wilberforce may have eventually softened his stance towards the concept of evolution.  Specifically, Wrangham discusses a poem written by Wilberforce (and subsequently discovered in his private papers held at the Bodleian Library, Oxford) written after his debate with Huxley. It ends with the lines:

“To soothe each fond regret, howe’er I can;

And, at the least, to dream myself a Man!”

In the words of Wrangham, the poem “..implies a man [Wilberforce] too committed to accept the evolutionary argument, yet too honest in the end to deny it. Who knows? Darwin may have had one more convert than he knew.”

Be that as it may, there is no doubt that in terms of science Huxley and Owen remained lifelong opponents. Nowhere were these differences more animated than in the debate over the degree of similarity between ape and human brains (sometimes referred to as the Great hippocampus question). This was significant because at the time, Huxley and Owen were the two leading British authorities on anatomy, yet they held entirely opposing views on the matter.

Owen believed that human beings should be taxonomically assigned to a separate mammalian subclass, thus distancing man from the rest of the animal kingdom. Owen claimed that ape brains were missing three uniquely human components; technically these are the posterior lobe, posterior horn of the lateral ventricle and the hippocampus minor (now called the calcar avis). Their purported absence in the apes Owen took as evidence against Darwin’s theory. Cosans (2009) describes how Huxley was so astonished by Owen’s claims – which he considered contradictory to the facts – that he saw no alternative but to refute them.

Huxley’s 1863 publication Evidence on Man’s Place in Nature, presented his definitive stance on the matter. The second chapter (On the relations of Man to the lower animals) was the most controversial, presenting a comprehensive review of the fossil and anatomical evidence for the similarities between man and apes. The debate was brought to a close when Sir Charles Lyell, Britain’s most eminent geologist and one of the era’s leading scientists, threw his support behind Huxley’s stance.

Equal to this contribution was the question of the origin of birds. Today, it is widely accepted that birds are descended from a branch of theropod dinosaurs, but fewer, however, are aware that it was Huxley who first proposed this evolutionary relationship.

In 1861,the German palaeontologist Christian Erich Hermann von Meyer described a fossilized feather discovered the previous year from Upper Jurassic sediments in southern Germany in the famous Solnhofen Limestone. Von Meyer named the fossil Archaeopteryx lithographica (meaning ‘the ancient wing from the lithographic limestone’). Shortly afterwards, the first skeleton of Archaeopteryx with feathers was described. At first its interpretation was rather convoluted, but Huxley made extensive and detailed comparisons of Archaeopteryx with various reptilian fossils and initially found that it was most similar to the small, chicken-sized theropod dinosaur Compsognathus: “Surely there is nothing very wild or illegitimate in the hypothesis that the phylum of the Class of Aves has its foot in the Dinosaurian Reptiles…” (Huxley, 1868, p.74).

Huxley was a great biologist and anatomist, and he played the key role in promoting and defending the theory of evolution by natural selection in the nineteenth century. He was also a pioneering educator, encouraging science students to carry out practical work in addition to book-based research, something which is now standard practice. He was a prolific writer, an articulate communicator and his pragmatic, no-nonsense approach to research was the embodiment of good academic form. He was also a man of high moral purpose and although he was lucky not to have seen the catastrophes of the twentieth century, had he done so he would have been horrified. 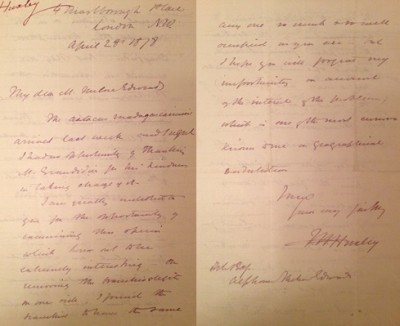 Sample of two handwritten letters from Thomas Huxley to the French ornithologist Alphonse Milne-Edwards. The letters appear to form part of Huxley’s research for his book The Crayfish: An introduction to the study of ... morezoology (1880). In them, Huxley requests to borrow two specimens of Madagascan crayfish in order to complete his examination of the southern hemisphere forms. (Photo & private collection: Victoria Ling, 2015).

Huxley famously remarked that so obvious was Darwin’s hypothesis that he wished he had thought of it. He would not have been alone, and one of the paradoxes of science is that the obvious may stare us all in the face, but only the person with the chutzpah of lateral thinking finds the solution.

The fact remains that when Huxley passed away in 1895, the world was a very different place to the one he was born into; he had played a key role in not only developing our understanding of the natural world, but more broadly speaking, encouraged unbiased, fact-based thinking. He founded a generation of open-minded scientists and his own descendants carried on his chain of perspicacious thinking: most notably, his grandson was the biologist Julian Huxley, who founded the World Wildlife Fund, and his other grandson Aldous Huxley was a writer, most famously known for the dystopian novel Brave New World. 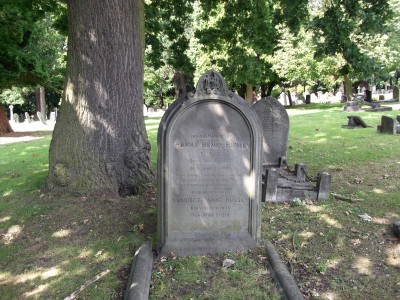 Mary Anning was a fossil collector who played a pivotal role in the development of geology, palaeontology and biology.