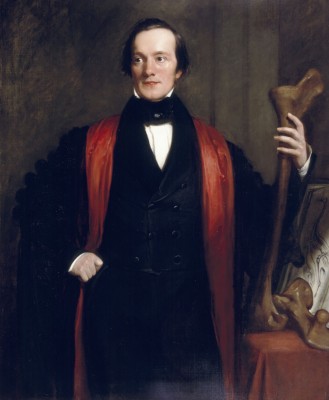 Oil painting of Richard Owen painted in 1844 by Henry William Pickersgill. In the portrait Owen holds the leg bone of a moa, and is wearing robes of Professor of Comparative Anatomy at the Royal College of Surgeons (Ima... morege: © The Trustees of the Natural History Museum, London. Used with permission)

A British newspaper described Richard Owen (1804-1892) as: The greatest scientist you’ve never heard of (Shindler, 2010). This statement is all the more surprising when one learns that Owen’s scientific career was immensely productive. This is evident from the fact that he published over 600 scientific books and papers, was frequently called upon to describe the latest fossils to Queen Victoria herself, and possessed an outstanding ability to interpret fossils often from just a few bones. This gifted biologist, comparative anatomist, and palaeontologist however is today best known for coining the word ‘dinosaur’. With the prescient recognition that those Mesozoic behemoths were not some sort of gigantic lizard – echoed in Gideon Mantell comparing his Cretaceous Iguanadon to living iguanas – but a wholly distinct sort of reptile now vanished from Earth, giving us a glimpse into deep time. Owen, therefore, deserves to be better known than his Victorian reputation suggests. Or does he?

One reason that Owen is not well known today is because although he was a pioneer in the art of detailed anatomical descriptions, that kind of meticulous writing can also make for laborious reading. He had a tendency to invent complex nomenclature, much of which failed to be adopted by the scientific community, thus making it a difficult read for contemporary audiences. The proverbial ‘elephant in the room’ however, is Owen’s reputation for being a ‘difficult character’. He could be a harsh critic, was almost ruthlessly ambitious, was not infrequently accused of plagiarism, and was unpopular amongst his fellow scientists. One of his most infamous acts was to credit himself with fossil discoveries that were actually made by the palaeontologist Gideon Mantell. Ironically therefore, it is perhaps Owen’s own formidable reputation that has eclipsed his scientific contributions for so long.

Owen’s character lacked the affable appeal of many of his better remembered contemporaries (such as Charles Darwin), which in turn – it could be argued – failed to inspire the modern public imagination. We now live in a media-driven world with a tendency to make ‘heroes and villains’ of historical figures in order to simplify and make them and their work easier to understand. Real life, however, is much more various and Owen was a complicated character. Undoubtedly there were parts of his personality that were not particularly attractive, but this is not sufficient reason to deny or ignore his scientific contributions.  Owen wasn’t ‘good’ enough to be a hero, and he wasn’t ‘bad’ enough to be an outright villain, so he sits largely forgotten under the ambiguous label of ‘complicated’. A modern world that likes its history presented in neat juxtapositions does not easily cope with ‘complicated’. To quote Paul Chambers (2002, p.69):

“Yes he was gifted, but he had an attitude problem to go with it.”

Some of Owen’s nomenclature however was adopted. Next to the term ‘dinosaur’, the word ‘homology’ is today one of the most commonly used terms in evolutionary studies, and Owen’s concept of homology was critical in developing evolutionary thought because it expressed a fundamental belief in the relatedness of all organisms (with endoskeletons – see the below image) and sparked discussion about evolutionary ancestors.

Owen described homologue as “the same organ in different animals under every variety of form and function.” (1843, p.674). In other words, homology is a characteristic present in two or more biological species which is derived from a common ancestor. Owen noted that there are often very different structures which display a common plan. For example, the human arm and the flipper of a whale might at first sight look very different but both are derived from the mammalian limb, and as we now know, ultimately a fish fin. Owen reasoned that there must be a structural plan for each class of the vertebrates and he called this plan the ‘Archetype’.

Richard Owen’s vertebrate archetype from his 1847 book On the archetype and homologies of the vertebrate skeleton (Image: Wikimedia Commons)

The idea of homology not only remains central in evolution, but is also the lynchpin of cladistics, where the term ‘synapomorphy’ is roughly equivalent, that is a character shared by two or more taxa. So too archetype retains more force than is sometimes realized because it begs questions as to both ancestral arrangements and evolutionary mechanisms of transformation. But his invocation of archetype has also led to Owen perhaps being a victim of misinterpretation or misrepresentation. More specifically, Owen’s views are often labelled as ‘anti-evolutionary’, but this is incorrect. Owen may have been outspoken in his objections to Charles Darwin’s theory of evolution by natural selection, but it is important to remember that Owen agreed with the concept of evolution. Where he differed was because in his view acknowledging the reality of evolution was one thing, but deciding how it actually worked was another. Owen received considerable criticism for his evolutionary remarks in his book Nature of the Limbs (1849, pp.85-86) where he suggested that humans had evolved from fish. This may sound like a fairly tame remark to make in the present day, but what Owen was saying was that humans had not been created in their present form by God; an extremely controversial statement in the mid nineteenth century and written of course before Darwin’s epochal book On the Origin of Species.

So, if both Owen and Darwin subscribed to evolution, where did they differ? Christopher Cosans (2009) sums up nicely the underlying divergence between Owen and Darwin: they simply looked at nature in two very different ways. Darwin may have accounted for the origin of species as the result of natural laws, but he could no more explain how that life came to exist on Earth than Owen could account for how life follows laws of morphological form.  While each side, therefore, had a point Owen’s staunch rejection of Darwin’s theory, combined with his challenging personality, led to Owen alienating himself from the younger generation of scientists. This included the English biologist Thomas Henry Huxley, also known as ‘Darwin’s Bulldog’, who became a life-long opponent of Owen.

Perhaps Owen’s most enduring and prominent achievement was the establishment of the Natural History Museum in South Kensington, London. In the mid nineteenth century Owen was Superintendent of the British Museum’s Natural History Department. Along with George Robert Waterhouse, Keeper of the Geological Department, Owen campaigned for two decades to have its natural history collection housed in a separate dedicated building. The need for such a museum, along with the adjacent Victoria and Albert Museum, was overwhelmingly obvious and Owen won the day. As a result, the Natural History Museum in London was established in 1881. Today, this architecturally stunning building, whose resemblance to a cathedral is far from accidental, continues to house a world renowned collection of fossils from across the globe, providing high quality public education about Earth history, alongside conducting its own scientific research. 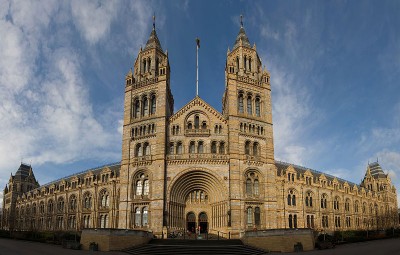 In conclusion, it cannot be denied that Owen’s personal character contributed to his lack of popularity amongst his peers and even eclipsed his own scientific achievements, whilst his intricately detailed writing style and nomenclature made much of his work less accessible to the modern reader. However, rightly Owen deserves credit for his contributions towards our understanding of man’s origins and the re-evaluation of Earth history and deep time.