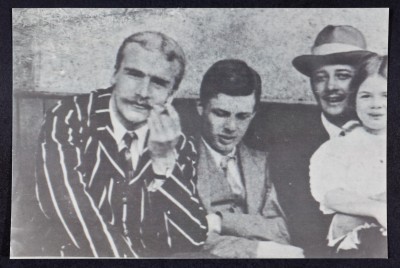 John Burdon Sanderson Haldane (1892-1964) had no formal education in any scientific subject and yet his polymathic abilities made him one of the most influential scientists of his day; a versatile and commanding figure in biochemistry, evolutionary theory, genetics, and physiology, publishing over 400 papers and 24 books. Haldane’s academic studies were in mathematics, classics and philosophy, but he became versed in the sciences through self-teaching and by assisting his father, the noted physiologist Professor John Scott Haldane, with his experiments.

Along with the evolutionary biologist Ronald Fisher and geneticist Sewall Wright, Haldane helped to found the discipline of population genetics; the study of genetic variation within a population. Haldane applied mathematical analyses to the study of human evolutionary biology and of particular note are a series of highly influential papers published between 1924 and 1934 entitled A Mathematical Theory of Natural and Artificial Selection. These became a cornerstone of the discipline. The opening statement of the first paper succinctly laid out the framework for this ten-part series: “A satisfactory theory of natural selection must be quantitative. In order to establish the view that natural selection is capable of accounting for the known facts of evolution we must show not only that it can cause a species to change, but that it can cause it to change at a rate which will account for present and past transmutation.” (Haldane 1924, p.19).

In the late 1930s and early 1940s population genetics was critical in establishing a school of thought that led to the Modern Synthesis, an intellectual movement which, in fusing ideas from a range of scientific disciplines, served to unite Darwin’s theory of evolution by natural selection with the framework of Mendelian inheritance. As an aside, the term “Modern Synthesis” was coined by the evolutionary biologist Sir Julian Sorell Huxley (whose paternal grandfather was the eminent biologist Thomas Henry Huxley) in his book Evolution: The Modern Synthesis (1942), who also happened to be one of Haldane’s acquaintances.

The importance of this Synthesis it is difficult to exaggerate. This is because although Darwin knew that heritable variability was essential to evolution, he had been unable to satisfactorily explain the actual mechanism. This is not to criticise Darwin, after all, his magnum opus On The Origin of Species remains the cornerstone of evolution and his speculations were before either genes, let alone DNA, had been discovered. It was the work of an Austrian monk, Gregor Mendel that led to genes being identified as Darwin’s elusive unit of inheritance. In short, and to quote the evolutionary biologists Ernst Mayr and William Provine “.. gradual evolution can be explained in terms of small genetic changes (‘mutations’), recombination, and the ordering of the variation by natural selection.” It is this holistic approach to evolution that inspired Haldane to become a founding figure of the Modern Synthesis.

Haldane’s broad view of life and his holistic approach to understanding evolution led him to speculate on the origin of life, epitomized in what is now known as the Oparin-Haldane hypothesis. The hypothesis is double barrelled because in the 1920s Haldane and the Soviet biochemist Alexander Ivanovich Oparin published similar thoughts on the origin of life, but without having met or read each other’s work. It is the not unfamiliar example of academic convergence – much the same idea appearing at roughly the same time, albeit independently. Perhaps the most celebrated instance is how the theory of evolution by natural selection came to be formulated by both Charles Darwin and his fellow naturalist Alfred Russel Wallace. Nor are such “coincidences” surprising when the intellectual milieu is conducive to several people stumbling across similar solutions to the same question.

Haldane described the conditions for early life as “pre-biotic soup”. This is not so far from Darwin’s brief rumination that life began in a “warm little pond” (1871). What is striking about the Oparin-Haldane hypothesis is that it proposed a broad framework for the origin of life that went beyond current biochemical knowledge. Although not widely accepted at the time, subsequently the hypothesis became more influential, and reached its apotheosis in the classic Miller-Urey experiments of the 1950s. Perhaps what was difficult for people to accept in the 1920’s was that the Oparin-Haldane hypothesis invoked chemical, rather than biological, evolution to explain the origin of life. It argued that given a suitable source of energy, such as ultra-violet light, life could have evolved in the oceans during a period when the atmosphere was very different from its oxygen-rich composition of today.

Haldane was also a great believer in the importance of the communication of science to the general public, regularly writing articles for newspapers and popular magazines. Writing styles can age quickly over the years and this is doubly true for scientific articles where there is a high turnover of specialised terminology, with words falling out of favour or being usurped by more specific nomenclature as new discoveries are made or broader scientific frameworks emerge. It is, therefore, a testimony to Haldane’s open, measured, and accessible writing style that even today his essays make for fascinating reading.

One of his most famous publications was the book Daedalus: or Science and the Future (1924). The book is based on the text of a lecture that he gave to the Heretics Society at the University of Cambridge in 1923. Its considered, balanced perspective serves as a deep reflection of Haldane’s intellectual prowess. In it he places science in wider societal context and puts forward his views on the paradigm-shifting, yet also stoic, nature of science. His views are neither cavalier nor delivered through rose-tinted spectacles. Rather, there is an underlying, sometimes foreboding tone, which warns that scientific advances – if they are to truly be of benefit to humankind – must be paralleled with advances in ethics and wider public understanding.

Daedalus is also a good example of how there has long been a feedback loop between the sciences and the arts. In this case, Daedalus was a major influence on Aldous Huxley’s Brave New World (1931), a dystopian vision of the future where technological advances create a world in which humans are grown in test-tubes and their minds are indoctrinated from the cradle on, and happiness is always available as the drug Soma.

Haldane’s background might make one wonder how it could possibly be fertile ground for a scientific career. Nevertheless, his unconventional entry into science is in itself a valuable lesson about the interconnectedness of seemingly disparate academic subjects, in this case mathematics and evolutionary theory. Today, interdisciplinary research is commonplace and widely encouraged, be it between different scientific subjects, or more broadly between science and the humanities, and science and the arts. Today, we understand better than ever how different scientific (and other) disciplines must combine their skills, techniques and knowledge in order to answer questions in common, particularly concerning evolution.

The concluding paragraph of Haldane’s 1932 book The Causes of Evolution includes this insightful line “The permeation of biology by mathematics is only beginning.” (p.215). Population genetics has, of course, flourished and is now an exceptionally active and productive field of research, but it also leads one to wonder what Haldane would have made of more recent unconventional marriages between the disciplines. The relatively new – and potentially fertile – subject of quantum biology, the application of quantum mechanics to biology, is one of the most exciting to spring to mind (e.g. Al-Khalili & McFadden 2014). As was once was the case with mathematics and biology, quantum biology combines formerly disparate fields of research in order to approach evolution from a novel standpoint. One suspects Haldane would have embraced the concept with delight.

Haldane was able to convey complex ideas in a clear, insightful and humorous manner, and he approached life – and death – with the same matter-of-fact humility. Indeed, shortly before his death from cancer in 1964, Haldane wrote a poem entitled Cancer’s a Funny Thing which was originally published in the 21 February 1964 issue of the British political magazine New Statesman. Haldane was a broad thinker who took a balanced, philosophical approach to life. This is poignantly demonstrated in the poem, of which we end here with the closing lines:

“… I know that cancer often kills,
But so do cars and sleeping pills;
And it can hurt one till one sweats,
So can bad teeth and unpaid debts.
A spot of laughter, I am sure,
Often accelerates one’s cure;
So let us patients do our bit,
To help the surgeons make us fit.”