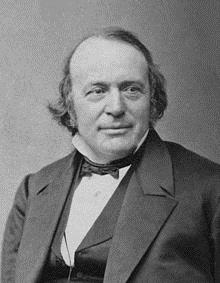 Jean Louis Rodolphe Agassiz (1807-1873) was a Swiss naturalist and palaeontologist, best known for developing the concept of glacial theory.

Glacial theory is the idea that glaciers once expanded over much larger areas of the Earth than they presently occupy, including much of temperate Europe and vast areas of North America. The theory played a key role in the development of the Earth Sciences in the nineteenth century. The idea that the Earth’s glaciers had united to form vast ice-sheets was something that other scientists in the nineteenth century had been discussing before Agassiz began to study the subject, but it was Agassiz who first proposed that the Earth had experienced a past ice age (Eizeit) and his seminal paper which became known as the Discourse of Neuchâtel brought the debate to a much wider audience.

In northern Europe, nineteenth century scientists had long been fascinated by large, isolated boulders (known as ‘erratics’) scattered at seemingly random locations across the landscape. Geologists could easily see that they were not derived from the local bedrock. So, how did such enormous boulders come to be located so far from their source? At the time, there was no single comprehensive explanation, and the intellectual background was not an easy one against which to argue the case for ancient glaciation. For example, many people invoked stories of myth and folklore to explain the position of these peculiar spectacles littered across the landscape, and there was another wide-held belief that they had been deposited as the result of a great flood; usually argued to be coincident with the biblical deluge from the time of Noah. 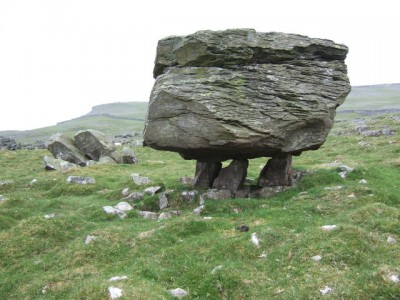 This is one of several hundred erratics spread across a low ridge at Norber in the Yorkshire Dales, England. They were transported by a glacier from nearby Crummack Dale (Image: Roy W Lambert via Wikimedia Commons)

In 1837, Agassiz presented a paper to the Swiss Society of Natural Sciences at its annual meeting in Neuchâtel, Switzerland. Members had expected Agassiz to present a paper on fossil fishes (his research speciality), but – as the young president of the Society – he instead presented his idea of glacial theory. Like other notable scientists before him, such as Jean de Charpentier and Bernard Friederich Kuhn – the latter of whom mooted the case for ancient glaciation as early as 1787 – Agassiz suggested that erratics had been moved from their source by the action of glaciers. That large boulders had indeed been transported across the landscape as a result of the movement of glaciers, and also marked with characteristic striations and pitting as a result of such transport, is now an accepted fact.

Other geological features that indicate past glaciation include scratched and polished surfaces on outcrops and moraine deposits (unconsolidated rocks and gravel). However, unlike his predecessors, who had argued that multiple glaciers once extended across the plains and valleys, Agassiz went further by arguing that there had actually been one large ice sheet that originated in the Alps and had extended to much lower altitudes; he argued that during the Pleistocene, ice had extended from the North Pole to the borders of the Mediterranean and Caspian seas. In short, there had not just been former glaciation, but an ‘ice age’.

Glacial theory changed our world picture. To place Agassiz’s contribution in perspective, note that even Charles Darwin – with his genius for lateral thinking – had failed to unravel the glacial puzzle. In 1831, Darwin had spent time on a geological excursion to North Wales with the Cambridge geologist Adam Sedgwick. Eleven years later, in a letter to the physician William Fitton (1842), Darwin stated how he had failed to see the significance of the peculiarities of the landscape he had been observing, but which now made sense in view of glacial theory:

“Eleven years ago, I spent a whole day in the valley, where yesterday everything but the Ice of the Glacier was palpably clear to me, and I then saw nothing but plain water, and bare Rock. These glaciers have been grand agencies; I am the more pleased with what I have seen in N. Wales, as it convinces me that my views, of the distribution of the boulders on the S. American plains having been affected by floating Ice, are correct. I am also more convinced that the valleys of Glen Roy & the neighbouring parts of Scotland have been occupied by arms of the Sea, & very likely, (for on that point I cannot of course doubt Agassiz & Buckland) by glaciers also.”

In addition, glacial theory did two things. First, it presented a world, almost on the edge of historical memory, that utterly transformed the way people thought about the Earth and could only have come about immense changes. As such, it opened the door to thoughts of climate change and catastrophe. Second, it built upon and supported the concept of ‘deep time’. That is, the notion that the Earth was far older than society had traditionally been led to believe by religious writings, which although based on careful scholarship, placed the creation of the Earth at 4004 BC.

In the early nineteenth century, geology was one of many disciplines grappling with the concept of deep time and what it meant for our understanding of Earth and evolution. For example, in 1787, the discovery of man-made stone tools in deposits of extreme age had led archaeologist John Frere to postulate a far more remote period of time than was commonly entertained. In the nineteenth century, different scientific disciplines were coming to the same conclusion: Earth was older – much older – than dictated by religious texts.

It took 25 years of research and the persistence of rational thought from some of the greatest scientific minds of the era to overthrow erroneous ideas of floods and myths, but their combined efforts enabled scientific hypotheses to flourish. Indeed, based on present evidence, we now know that the Earth has experienced at least five major ice ages.

At dusk by the shore, a shadow catches your eye and you ‘freeze’…  As your body stiffens, your senses switch…