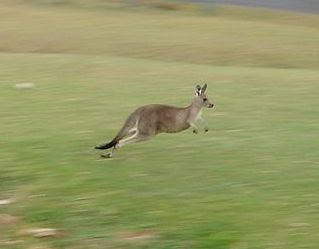 Watching a mob of grey kangaroos pouring silently through a grove of gum trees, one might think that with a little more effort they would become airborne. But no hope: kangaroos hop, as do kangaroo rats. Both are mammals, but kangaroos are marsupials, whereas like us kangaroo rats are placentals. When it comes to evolutionary convergences comparisons between these two groups offer rich pickings, not least when it comes to the invention of gliding. Marsupials such as the sugar glider have striking similarities to the flying squirrels, rodents just like the kangaroo rats. But there are notable gaps in this roster of convergences. Gliding is one thing and has evolved independently dozens of times, but powered flight is a much bigger hurdle. Yes the placental mammals achieved this in the form of the bats, but here is something that the marsupials never managed. For them wings – and for that matter flippers – were forever out of reach.

Or were they? Marsupials have been labelled the six-percent solution because that is their fraction of total mammal diversity. Today they are far outnumbered by the placentals, but that certainly wasn’t true in earlier times. Before their long retreat to such refuges as Australia, marsupials were spread across much of the globe. So what is this fossil from the Eocene of Egypt? About 35 Ma old, unfortunately the remains are pretty scrappy, only bits of lower jaw and teeth. But the scientific name Ghamidtherium is a hint, especially if your Arabic isn’t too rusty. Ghamid is the word for mysterious; tantalizingly these bones are from either some sort of marsupial with bat-like features or a real bat that looks suspiciously like a marsupial. Well either is possible, but here is a far more radical suggestion. Ghamidtherium was a marsupial and it really flew.

Almost invariably the marsupials are regarded as the runners up. Protests that they are simply different, neither better nor worse than their placental cousins do not cut much ice. Repeatedly, and with much finger wagging, the marsupials are wheeled forward to provide an object lesson on the nature of evolutionary constraints: marsupials can glide but never learnt to fly. And when we look at the factors that kept them grounded it all looks pretty convincing.

One of the most important differences between marsupial and placentals concerns reproduction. In the former the young are born at much earlier stage of development, so their first challenge is absolute: although blind, they must find the pouch (in Latin the marsupium) and latch on to the nipple. Usually this involves a heroic climb up the mother’s fur, employing a muscular shoulder-girdle and large forelimbs equipped with claws whilst the stubs that pass for hindlimbs drag uselessly behind. Success or failure are completely dependent on this arrangement and, so the argument goes, this pre-determines what marsupials can and cannot do. Hop, run and even glide but for arms to transform into wings is deemed to be simply out of the question.

Or is it? First the fact that the early development of the fore- and hind-limbs is so strongly dissociated finds a direct parallel in the bats for the simple reason that the wings must do the flying while the legs are in charge of the roosting. But to begin with the baby bat is too busy guzzling from those pubic nipples (think about it …) and it is some weeks before it takes off. So as the developmental machinery that transforms the hand of a young bat into a four-fingered wing is unremarkable, what’s to stop a marsupial taking a similar route? Consider also the nectar-feeding glossophagine bats. They have a highly specialized skull and a tongue like a bottle-brush. Any parallels? Yes, in the honey possum (Tarsipes), one of the tiniest of the marsupials. But are you trying to say that in the end marsupials and placentals really are equivalent? If so, how can we bridge that profound reproductive divide? In marsupials there is little need for a fully-fledged placenta given the young are born much earlier. In principle, yes, but the bandicoot clearly hasn’t read the text-books. This marsupial not only has a genuine placenta but on birth the young don’t crawl but slither down to the waiting pouch.

But wait a minute! Aren’t bandicoots rather large marsupials and if you are going to start zooming through the trees it might be sensible to start small? Indeed, yes, but recall when we look at the fossil record of the earliest bandicoots then some are more or less mouse-sized. One last thing: shoulder-girdles of marsupials are central to the constraint story that argues that once this group had made this evolutionary decision then evolving wings was impossible. But there is an interesting exception, and once again it is the bandicoots. True to form they have torn up the evolutionary manual because the development of the bandicoot shoulder-girdle is much more like a placental. But guess which one? No prizes, it is a bat. Let’s start thinking out of the box and stop getting so hung up with constraints. If bandicoots are slipping towards being an honorary placental, then maybe it is time to take a visit to a counterfactual world. It is one where during the Cretaceous the placentals didn’t get their head-start over the marsupials, but the other way round. So too let’s imagine that rather than the marsupials, it was the placentals that were clobbered in the subsequent extinctions that saw the dinosaurs to the door. So a different history, not identical but oddly similar. Draw a little closer because it is a lovely evening. On the veranda a group of women sit peacefully. One holds her pouch and out looks her child. In the twilight the bats are swooping, marsupials of course.

Riddles in code; is there a gene for language?

‘I have…’ Words are like genes; on their own they are not very powerful.  But apply them with others in…