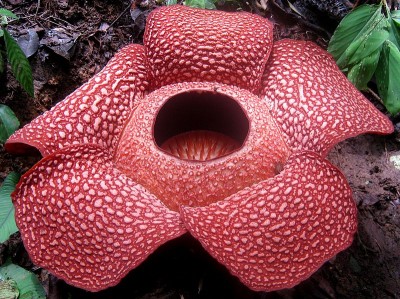 Rafflesia arnoldii. It’s common name is the ‘corpse flower’, so-called because it gives off a repugnant smell akin to that of a rotting corpse – which attracts the carrion flies that pollinate it... more (Image: Wikimedia Commons)

What is that ominous scratching at the larder door? A cautious opening reveals a snap-shot from a science-fiction film. Across the floor sinister white tendrils snake in all directions, blindly seeking the light. Yes, your much neglected potatoes have decided to make a break for freedom. Plants without sunlight are a contradiction in terms, as ridiculous as suggesting that fungi might hunt or alternatively burst into flower. Plants underpin the entire biosphere. Along with the algae, their ability to capture sunlight using chlorophyll and thereby synthesize sugars is the source of primary productivity, while at the same time life-giving oxygen is exhaled. So no point looking for tulips in a cave; plants definitely need sunshine.

Deep within a tropical liana a parasite lurks. Consisting of single filaments this unwelcome visitor is almost impossible to distinguish from the surrounding tissues. But now comes the urge to reproduce. Cells coalesce and suddenly through the bark of the host a colossal red flower erupts. It is almost a metre across and from it wafts a putrid smell that, along with a repulsive appearance deceptively similar to rotting flesh, acts as magnet to flies. Fooled into thinking they are alighting on carrion, unwittingly these flies undertake the all-important task of pollination. Encountering the monstrous Rafflesia almost persuades you that you have stumbled across an extraterrestrial, but this relative of the spurges (euphorbiaceans) exemplifies those plants that, like Gollum, have turned their back on the sun. Sans leaves, sans chlorophyll, sans almost everything, here is a plant whose sole experience of the outside world is during flowering and the subsequent dispersal of its seeds to latch on to the next victim.

Like us ultimately dependent on sunlight, but wholly reliant on its host. Rafflesia might be extreme in almost every sense of the word, but this evolutionary experiment is rampantly convergent. Many parasitic plants, such as the rafflesiaceans and that major agricultural pest, the dodder, intermingle their tissues with those of the host in order to drain them of nourishment. Others form an intimate association with fungi and you may wish to have a go at pronouncing mycoheterotrophy, for that is the name of this relationship. Orchids are past masters of this ability to raid the fungus of nutrients but here too there are extremes. Consider the Australian orchid Rhizanthella that lives and dies in the darkness, even flowering underground.

Maybe I am too anthropocentric but if bacteria living in boiling water are one extreme, so in other ways are many parasites. Forming a set of threads that ramify through the host is one such trick, found not only in parasitic plants but also a barnacle that injects itself into a crab and like Rafflesia is only obvious from the sex organs dangling into the outside world. Parasites teach us useful evolutionary lessons, and perhaps none more so than the plants. The road to darkness has been taken independently many times. In this respect the flowering plants (the angiosperms) stand out, but there is also a relative of the mosses, the aptly named ghostwort, while further afield the red algae repeatedly have disposed of their chloroplasts.

Some of the parasitic plants have very deep roots, and as one-time companions of the dinosaurs remind us that even in the Cretaceous the world was already modernizing. Another curiosity is that although convergent, only some groups are especially prone to parasitism while others have consistently declined the invitation. Of the former the broomrapes (known to botanists as the orobanchaceans) have not only turned to a parasitic way of life but show an almost seamless set of transitions from fully photosynthetic to totally parasitic. Rafflesia has taken this to the logical extreme and jettisoned its entire chloroplast. The genome also suffers dramatic erosion, but this is by no means a one-way traffic: extensive loss maybe combined with theft of the host’s genetic machinery.

Amongst the many surprises, however, is that both structures and molecules that should have ended up on the scrap-heap remain alive and well. The enzyme known as rubisco (quicker to say than the mouthful ribulose-1,5-bisphosphate-carboxylase/oxygenase) plays a central role in photosynthesis. One might imagine, therefore, that as this machinery is declared redundant rubisco is also shown to the door. The parasitic plants know better. The only explanation is that rubisco is needed elsewhere. Should this interest us? Yes, and for two reasons. rubisco is famous for being the nearest thing to a walking disaster in biology. Unlike many enzymes it is spectacularly inefficient (largely because of a sort of self-poisoning), so engineering any improvement would have enormous implications for agriculture. Maybe the dark-side of rubisco could give us a few clues? Second, if one thing irritates me more than discovering we have run out of gin, it is the prattle of the bien-pensants that an enzyme (or a gene) is like a screw-driver, good for one thing only. In nature exactly the reverse applies. Amongst the better kept secrets in biology is the extraordinary versatility of many molecules. It is as if that screw-driver also serves as a feather-duster, a cork-screw and a bicycle pump.

No, don’t be ridiculous Isn’t this question in the same category as “Can a fly ride a bicycle”? Now we…

No, don’t be ridiculous Picture the scene. “Darling, I’ve been a perfect fool”.  The acceptance – albeit with a curt…