Are there terrestrial mammals in New Zealand? 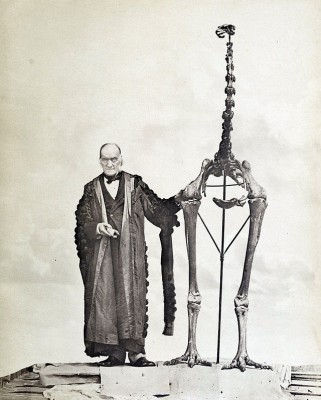 The nineteenth century palaeontologist Richard Owen standing next to the skeleton of a Giant Moa. The image is from Owen’s 1879 book Memoirs on the Extinct Wingless Birds of New Zealand (Image: Wikimedia Commons)... more

Oh dear, get a grip. Perhaps you haven’t been there? The place is swarming with mammals, not least the air-line pilots who ferry thousands to and from New Zealand every day. True enough, but consider how they got there. There are indeed indigenous bats and seals, but the former flew to their new and isolated home, whilst seals (and penguins) could swim to the shores. Everybody else is a very recent immigrant. First the Polynesians, engaged in their extraordinary Pacific diaspora, and stepping ashore as Maoris at more or less the same time as Henry III reigned over England. Later, waves of Europeans, bringing in a host of mammalian companions – dogs, sheep, even hedgehogs – that collectively had a profound impact on the indigenous fauna and flora. So no shortage of terrestrial mammals, even though some have proved to be real troublemakers. Best known is the story, more a legend, of the lighthouse keeper’s cat polishing off the planet’s only representatives of the Stephens Island wren.

Please re-read the question; I said not just mammals but terrestrial mammals. While New Zealand is full of the ghosts of recently departed species like the Moa, there are much older hauntings. Fossil fragments from the Miocene of South Island appear to represent not only an indigenous mammal, but intriguingly one that appears to be neither a placental nor marsupial and maybe a holdover from the time of the dinosaurs. This find poses some fascinating questions. When and how did it arrive in New Zealand? When and why did it go finally extinct, so leaving a land without a single terrestrial mammal?

New Zealand represents a marvellous evolutionary laboratory, giving us a glimpse of how a world functions without terrestrial mammals. The indigenous mystacinid bats can still fly, but have converted themselves into mice-avatars. Tightly folding their wings they scuttle across the forest-floor, live in tunnels, and with acute hearing enjoy an omnivorous diet. The iconic kiwi is for all intents and purposes an honorary mammal, with fur-like feathers and a nocturnal life very much relying on its sense of smell. This bird is only one of a variety of ground-dwellers, of which the most spectacular was the Giant Moa. Now extinct, these enormous birds were briskly converted into moa-burgers and moa-twizzlers, not to mention moa-omelettes, by the incoming Maoris. So the Moa faced the same fate as innumerable other species on oceanic islands when the colonists arrived. Yet these birds left memories other than the stacks of bones and broken eggshells. The Moa was a browser but fed in a rather different way to its mammalian counterparts such as a cow or deer. To make life difficult for the Moa the plants adopted countermeasures. These included tough narrow branches with widely separated and small leaves or alternatively ensured those leaves growing in the browsing zone (which for a Moa is up to 3 metres!) are in one way or another difficult to spot. The Moa has vanished, but nobody told the plants.

Pausing on the bank, the lead female gathers her herd, ensuring that she is followed before she plunges in.  The…