Can you reinvent a sabre tooth? 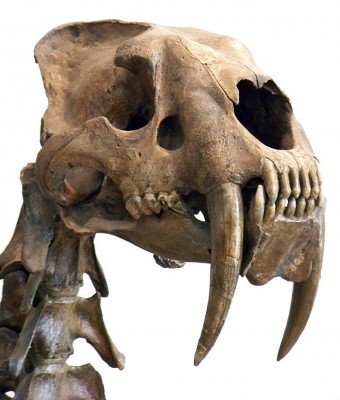 Why is that small animal immobilized with terror? No prizes for guessing. Ready to pounce is a large cat and if things were not bad enough extending from its upper jaw are a pair of immense canines. The end is mercifully quick. Unlike lions and the like, who typically clamp the victim’s throat to ensure a slow suffocation, the sabretooth firmly holds its prey with powerful forelimbs. The jaws then gape to an astonishing degree, before powerful muscles guide the head to execute a precision bite. Repeated punctures ensure uncontrolled haemorrhaging, massive shock and a rapid death. It is not a pretty sight, but like a nightmare this scene of carnage repeatedly loops back into frame.

Camera! Lights!! Action!!! The film starts to roll about 40 Ma ago. Entrance left, an Eocene nimravid sabretooth prowls into shot. We could hang around to watch its extinction but let’s fast forward another 20 Ma. Entrance right, its successor strolls out of the Miocene undergrowth in the form of a lethal barbourofeline. These sabretooths are also ultimately doomed, but no matter because the replacement machairodonts (epitomized by the iconic Smilodon) make their debut in the Pliocene. “Can you reinvent a sabretooth?” Yes, not only are nimravids, barbourofelines and machairodonts each independent inventions of a sabretooth design, but the progression from primitive to advanced forms follows almost identical tracks. So too there are more detailed recurrences, notably between forms equipped with slender canines (the dirk-tooths) and stout limbs versus others armed with shorter scimitars and swifter of foot.

Time-travellers beware! Before you open that hatch have a careful look around because odds are that waiting to pounce will be one or other sabretooth. That at least holds for visits to much of the northern Hemisphere, but is South America any safer? Until about 5 Ma ago it was a sort of super-Galapagos, a continent in isolation, but with mammalian evolution going full throttle to produce a welter of different placentals and marsupials. When a cat with immense canines pads past you, and your guide excitedly whispers that this is a thylacosmilid, you might assume that yet another placental mammal has reinvented itself as a sabretooth. Then your guide drops the bombshell. Sabretooth it is, but cat it isn’t: this thylacosmilid is a marsupial.

In terms of evolution this means that the thylacosmilids are much more closely related to a kangaroo than to any cat. To be sure both marsupials (grown-ups called them metatherians) and placentals (professors mumble about eutherians) are mammals, but they have pursued independent histories since the time of the dinosaurs. Carnivorous marsupials are common enough and the group (the borhyaenids) to which the thylacosmilids belong provides plenty of examples. But to turn itself into a close facsimile of a sabretooth is a much more remarkable evolutionary feat. Not that “real” sabretooths and “fake” thylacosmilids are identical; in this marsupial the ability to regenerate a snapped canine is an obvious advantage denied to its placental counterparts. Elongate canines glittering in the mouths of carnivores make good functional sense, but the evolution of sabres springs further surprises. Amongst the marsupials the thylacosmilids are not quite alone, because on a smaller scale the short-tailed opossum also comes equipped with prominent canines.

What of the placentals? Near contemporaries of the earliest sabretooths also saw the evolution of such behemoths as the uinatheres and a pantodont with the tell-tale name of Titanoides. They sport impressive upper canines but the rest of the dentition speaks to a vegetarian diet. What’s going on? In Titanoides at least perhaps they served to slice roots and tubers exposed by the animal’s digging claws. Further back in time, Permian mammal-like reptiles such as a herbivorous anomodont (known as Tiarajudens) and carnivorous gorgonopsians (such as Inostrancevia) brandished enormous canines and in at least the former animal were most likely used for display. And this takes us almost full circle back to the sabretooths. That their canines were the tool for assassination is not in doubt, but curiously their rate of growth is disproportionate to the rest of the body (in the trade this is known as positive allometry). So maybe these teeth served a dual function: killing prey certainly, but in either threatening rivals or advertising to potential mates then like the antlers of a stag the size of the canines could be vital signals in the mating game.

Whatever else sabretooths tell us, the over-riding sense is one of déjà vu; the eternal return where biological form transcends history. Just as the evolutionary canvas is repopulated with successive groups of sabretooth, in North America other so-called ecomorphs – ranging from giant herbivores, to dogs, digging rodents and shrews – all re-evolve. It is like watching a play trapped in a time-warp. Repeatedly we see the “same” community, each with much the same cast of mammals and all speaking the same lines. Ultimately they slide into extinction. Then the replacement ecomorphs appear and promptly go back to the beginning of the play to parrot the same lines. It may be a classic example of iterative evolution but it finds parallels in animals as different as sea-cows, snails and ammonites (and even the single-celled foraminifera).

Repetition is, of course, never precise and beneath the iterations is the drum-beat of deeper changes. In the mammalian communities carnivores as different as bone-crushers and hypercarnivores repeatedly re-evolved, but fast running forms exemplified in the long-legged wolves are a recent invention. Nor was this the only evolutionary innovation. An even more seismic shift involved those skilful apes with their prodigious increases in brain size. They ushered in a new world, some even call it the Anthropocene, and now all bets are off. The once invincible became vulnerable and perhaps we helped the last of the Pleistocene sabretooths through the door marked “Extinction”. But is their day truly past? Lurking in the forests of Sumatra and Borneo one can find the Sunda Clouded leopard. This cat seems to be taking the initial steps that given enough time would transform its descendants into the next sabretooth. But with this leopard high on the endangered list the chances of this reinvention ever happening are decidedly slim.