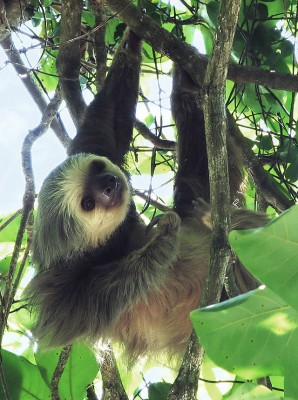 Hoffman’s two-toed sloth (Choloepus hoffmanni). Sloths have a green tinge to their fur. This is due to a symbiotic guest in the form of a green algae, conveniently housed in specially modified hair (Image: Wikimed... moreia Commons)

Well, I suppose if you are an extraterrestrial you might as well add green dandruff for that extra touch of realism.  But trust me, I’m a biologist and so the answer is “No!”, irrespective of what punk colouring you have adopted for your hair. But maybe you didn’t know that dandruff is associated with a charming little fungus. Not a mushroom, but a relative (in the group mycologists call the basidomycetes), known as Malassezia. Not surprisingly this form has a special fondness for oils and other yummy sebaceous secretions. So why do my shoulders look as if they have experienced a light snowfall whilst my frisky companion is dandruff-free? The fungus Malassezia is not alone and your scalp (and the rest of your skin) hosts many other guests, including bacteria. Shifting the balance in these microbial communities seems to control whether the dandruff begins to fall.

Ever seen a sloth? Notice that greenish tinge on its fur? Not strictly dandruff, but rather extraordinarily a symbiotic guest in the form of a green algae, conveniently housed in specially modified hair. So why encrust yourself in a close relative of sea-weed? A simple suggestion is camouflage in the forest canopy from which they hang so lethargically. In fact the answer is more remarkable. Sloth food is not for the faint-hearted. This is because the leaves they eat may be nutrient poor and even toxic. Also as tree-dwellers they can’t be that heavy, and notwithstanding a gigantic stomach smaller bodies mean shorter guts and so less capacity to digest their food. The algae is probably licked off, and being rich in lipids provide a vital supplement. So sloth and algae live in symbiotic harmony, but the story has another twist. The sloth fur is also rich in moths. Not because it is like a carpet belonging to Miss Havisham but because here too mammal and insect depend on each other. About once a week the sloth descends to the forest-floor to defaecate (and urinate) and the female moths deposit their eggs in the steaming mass (an amount about equivalent to a third of its body weight of the now much-relieved sloth). One up for the moths. But the moths are also a source of nitrogen, and this helps nourish the algae.  So in a sort of way the sloths farm the algae.

So “green dandruff” is an example of the inter-dependence of animals and their associated microbial communities. Things are not always in balance as skin disorders such as acne and psoriasis clearly show, but in many cases bacteria on the skin and in the gut are clearly beneficial. So too the life of the sloth, living as it does on a metabolic knife-edge, would probably be impossible unless it had green “dandruff”.