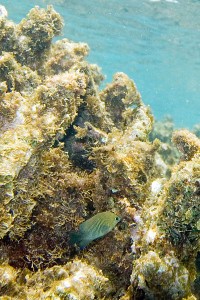 Isn’t this question in the same category as “Can a fly ride a bicycle”? Now we all know that fish show an impressive range of feeding habits. Moray eels gobble their prey, rays grind up shell-fish, megamouth sharks filter vast volumes of sea-water, lampreys suck the juices from their prey and sunfish engulf jellyfish. Fish even nibble algae and have a digestion just like ruminants. And in this grazing environment who can be surprised that the competitive pressures on space result in hedgerows of algae springing up along the borders that separate the territories of aggressive neighbours. But farming? Is this not a step too far?

Not if you are a damselfish. They are noisy little creatures and adept at sound production by crashing their teeth together. This chimes with their fierce territoriality but bringing your jaws together extremely rapidly and precisely (by virtue of a special ligament in the jaw) has another major benefit. This is because it allows the fish to feed on tiny pieces of nutritious red algae whilst avoiding scooping up sand and other bits of rubbish. And it is in the shallow warm waters of the reef tops that these algae not only flourish but where the damselfish establish their farms. Not only do they constantly patrol their highly productive “fields” to drive off intruders, but in weeding the fish strip away unwelcome competitors and other unpalatable species. In at least one case this results in a near-monoculture, populated by a filamentous red algae delicate enough for digestion but unable to survive in the rough and tumble of the outside world. Should the fish move away (or be deliberately excluded), then the farm – be it one of monoculture or mixed culture – quickly falls into rack and ruin. Nor is the “farm” necessarily an unmixed blessing to the surrounding world given it shifts the microbial community in favour of pathogens that might harm corals. 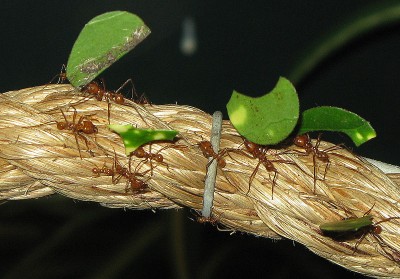 Given the massive investment in modern-day agriculture, the sophistication of methods to ensure the highest yields and greatest resistance to pathogens and pests, the development of vast irrigation schemes, and the intricate methods of harvesting, one might forget that not only is human agriculture a very recent (and patently convergent) invention but at its first stage must have melded into the existence of the hunter-gatherers. So it should be no more surprising that agriculture has evolved numerous times, not only in animals like arthropods (ambrosia beetles, gall midges, termites) and molluscs (snails), but even in slime moulds. Fish farming is also complex, but the damselfish weeding and waste disposal is not matched by sowing or transplanting. Other animals, however, are more sophisticated, with the acme being reached by the leaf-cutter ants. Here immense populations harvest leaves to maintain fungal monocultures, protect them by both weeding and using natural fungicides, encourage growth by application of fertilizers and ensure waste and often toxic by-products are removed to places of safety where they offer no threat of contamination. These advanced attine ants evolved from simpler systems, but for them there probably is no turning back. Nor is there for us.

Yes, of course Well, I suppose if you are an extraterrestrial you might as well add green dandruff for…