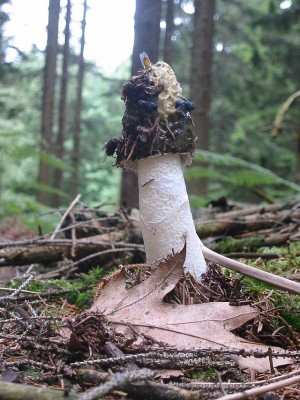 What’s that phallic-looking object, its surface agreeably viscid, doing as it provokingly points upwards towards the sky?  No, no, we may be in a meadow but that livid object is a stinkhorn.  Cousin to the mushroom, and unsurprisingly known as Phallus, here is another striking example of how fungi produce their fruiting body.  So it is certainly reproductive, but serves to release spores rather than pollen.  In any event fungi are relatively closely related to the animals, so this means you’re an opisthokont if that makes you feel any happier.  Plants on the other hand are perched in a very different region of the Tree of Life, where they are on speaking terms with various types of sea-weed.  Not only that but flowers are only found in the most advanced plants which grown-ups call angiosperms (although the class-swot will raise his hand to ask about the gnetales), so any idea that fungi can produce flowers reveals a monumental inability to understand even elementary biology.  All fungi and plants have in common is that they grow in the ground.  Is that understood?

It is time for the botany excursion.  Sensible shoes, satchels packed with sandwiches, lashings of lemonade, and the all-important Flora of Zubrowka.  The students are keen as mustard and so they should be because in a verdant valley they spot an interesting-looking member of the mustard family, a member of the brassicas.  Floras are whipped out of the bulging satchels but it is soon clear that something has gone horribly wrong.  Confusion reigns, even the demonstrator feels for his hip-flask.  Yes, plenty of flowers, but they are the wrong colour, in the wrong place and have the wrong shape.  Yet the insects are merrily buzzing in, obviously attracted by the scent and lapping up the abundant nectar.  What’s going on?  A strange mutant, may be even a visiting extraterrestrial?

No!  What has fooled the students is a pseudoflower, the product of a fungus (a rust known as Puccinia).  Not only has it hijacked the developmental system of the host plant by persuading it to make leaves that look like flowers, but also arranged for attractive volatiles to be released and a sugary reward to be provided.  Instead of receiving a dusting of pollen, the insects depart with freight in the form of fungal spores, en route to complete the life-cycle of the deceiver rather than the mustard plant.

It is not only insects and botany students that are misled.  Another fungus, this time a smut, persuades pinks (members of the caryophyllaceans) to make anther-like structures in their flowers.  Rather than being packed with pollen they house, however, myriads of fungal spores.  Once again the insects are duped, but so too are the professionals as they assign their new discovery (“a pink with highly distinctive anthers”) to a previously unknown species.  In fact, you don’t even need to fake the flowers because in other cases an attractive fragrance, pseudo-nectar and heavily infected leaves that mimic the ultraviolet reflectivity of genuine flowers will be sufficient to deceive.  Well, fungi are complex organisms, so perhaps we should be no more surprised to see them building fake flowers than hear them hallooing “Tally ho!”.  But one has to draw the line somewhere.  Plants certainly suffer from bacterial attack, but nobody would be so silly as to suggest the little blighters can turn them into zombies and take over their command centres, would they?

On the contrary; welcome to a nasty piece of work, the parasitic phytoplasmas.  They concern us because they can inflict crippling agricultural damage, and against which we have few defenses.  But their capacity to inflict mischief extends far wider, not only amongst the angiosperms but also some gymnosperms (pine trees to you and me).  Clogging up the tubes (the phloem) that convey the sugars, these bacteria extend molecular tentacles to re-order the plant to their convenience.  Short-circuiting the molecular machinery, phytoplasma converts the flowers into fake leaves, adds a splash of green, instructs the branches to look like a witches’ broom and provokes bolting.  Just as with the fungal “flowers” the trick is to attract insects like leaf-hoppers that drink deep at the phloem wells and thereby in due course will transfer a dose of phytoplasma to the next plant it happens to alight on.

All this molecular deceit is achieved with a tiny genome.  As with the more benign bacterial endosymbionts that sustain similar insects which feed only on water(well xylem sap; the phytoplasmas have discarded most of their metabolic machinery and so are entirely reliant on their hosts making up the deficiencies.  Despite this the genome is not only extraordinarily adaptable but dedicates roughly a third of its genes to living in the plant (phloem sap is an osmotic nightmare) and another third to make itself comfortable in the insect host (where they are adept at latching onto muscle proteins).  Clearly bad news all round for the plant, but what about the insect vector?  Certainly in some cases its presence is malign, for example by shortening life expectancy.  In other cases by sabotaging the plant defenses it encourages a population explosion of the insect.  On paper a happy outcome, but the phytoplasmas are as self-serving as ever, merely ensuring that an even larger horde of insects depart with their dangerous cargoes.

In the wider worlds of parasitism and misappropriation there are recurrent themes.  One example is the sabotage of sexual attraction.  In the case Puccinia and similar fungal pathogens their modes of transmission have some intriguing similarities to venereal disease.  Whilst the fungi must rely on a vector to spread their mischief, the shared features point to more general principles that should receive much more attention from biologists than they perhaps is customary.  One point of similarity between sexually transmitted disease (STDs) in plants and us is that unlike most pathogens, that aim to kill, here the net result is usually sterility.  Nor is this transmission invariably a one-way journey, solely to the advantage of the fungus.  Various insects like to seek out juicy fungi in order to lay their eggs and so allow their larvae a mushroom-feast.  So if you are a plant, why not produce enticing scents or mould part of the flower into a mimic-mushroom in order to persuade the insects to visit the flower, nicely warmed up and primed for pollination?  But did I say “enticing”, even fragrant?  What about the South American plant called Duguetia.  Releasing a smell that has been compared to over-ripe Camembert, old socks and a touch of vomit, we can hardly be surprised to learn that this repulsive smell is a close mimic to that wafting from the suggestively shaped stinkhorn.  Nor is this the only organism to benefit from emitting horrible smells, or rather getting somebody else to do the dirty work for you.  Why is that spider’s web bestrewn with plant and animal debris?  One possibility is to provide a convenient larder, but more plausible is that the putrid smells serve to attract blowflies, albeit to a sticky end.

No, don’t be ridiculous No! Mushrooms may be delicious, but in the cold light of biology they are simply the…

Alfred Wegener was a German geophysicist and a pioneer of polar research. He made a lasting contribution to evolutionary studies by developing the theory of ‘continental drift’.