A: The skull of the dolphin-like Temnodontosaurus platyodon (originally Ichthyosaurus), drawn by Everard Home and published in the Philosophical Transactions of the Royal Society, 1814. The first fossil ichthyosaurs were dubbed ‘Sea Dragons’ by the popular press. This fossil was found by two children, Joseph and Mary Anning, in the Blue Lias cliffs of Lyme Regis, Dorset. In May 1819, the full 9 metre long skeleton arrived at the British Museum where the keeper of natural history, Charles Konig, initially gave it the name ‘Ichthyosaurus’, meaning ‘fish-lizard’ (Image: Wikimedia Commons)

It is spring, 1811, the morning after a storm.  Mary is 12 years old, and fearless.  She edges across the cliff to where her brother is already working to free the fossil bones.  Fragments of weathered mudstone clatter down onto the beach.  The eye sockets of the huge skull are wider than the span of her hand. 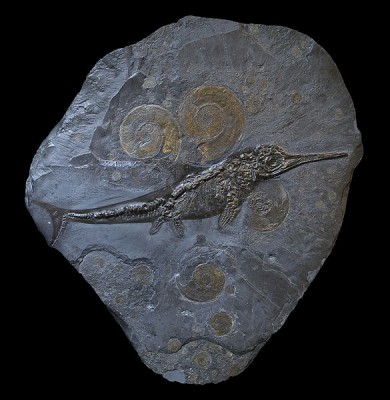 A 185 million year old fossil of Ichthyosaurus acutirostris beside ammonites (Harpoceras falcifer). This specimen shows the distinctive downward (hypoocercal) bend of the spine into the lower tail fluke, characteristic ... moreof this reptile group. The outlines of the fluked tail and dorsal fin are visible; these were supported by cartilage rather than bone as in modern fish. The huge eye sockets (relative to its body size) enabled these animals to hunt by sight for shellfish, small fish and squid in dimly lit or murky waters (Image: Wikimedia Commons)

Of these, ichthyosaurs were arguably the most successful.  Their multiple adaptations to a fully aquatic life included huge eyes, a stiffened, fluked tail, and the ability to mate and give birth to live young in water.  Much as killer whales do today, these predators structured the marine ecosystem.  Many came to resemble the modern whales, dolphins and tuna fish that now fulfil similar ecological roles.  The convergence of body forms between some ichthyosaur species and tuna are particularly astonishing because these reptiles were air breathers.

Why did icthyosaurs evolve to look like modern marine animals? 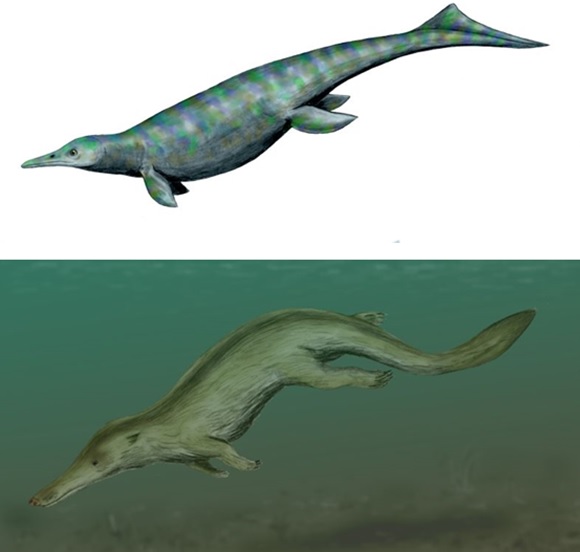 Ichthyosaurs first colonised the sea 250Ma ago. The earliest known aquatic ichthyosaur, the otter-like Utatsusaurus hataii (top) fed on fish and shellfish in shallow water. After the Cretaceous-Tertiary mass extinction ... more(65Ma), the land-based ancestors of modern whales also took to water. The early whale Kutchicetus minimus (bottom) had an otter-like ecological role, and converged to evolve a similar body form. Both had an undulating swimming style which was in the horizontal plane (like an eel) for Utatsusarus, and vertical for Kutchicetus. This reflects the style of locomotion inherited from their respective ancestors (Images: Wikimedia Commons)

Life in water poses a specific set of challenges.  These marine reptiles fulfilled similar ecological roles  to whales, and in time evolved body forms similar to these modern mammals.  This is known as convergence.

Like whales and tuna, ichthyosaurs were adapted for long distance energy-efficient swimming.  The respective horizontal and vertical strokes of both ichthyosaur and dolphin tails give an equally powerful ‘lift’ in both directions, propelling these animals forward in a near straight line.

A further example of this convergence is seen in the modern otter.  Unlike the Ichthyosaurs, both whales and otters had land-based mammalian ancestors with a vertically moving spine, giving them their bounding gait.  The whale-like ichthyosaurs moved their tail flukes horizontally, like a modern lizard.

Like whales and tuna, ichthyosaurs were adapted for long distance energy-efficient swimming.  The respective horizontal and vertical strokes of both ichthyosaur and  , propelling these animals forward in a near straight line.

What can modern animals tell us about ichthyosaurs? 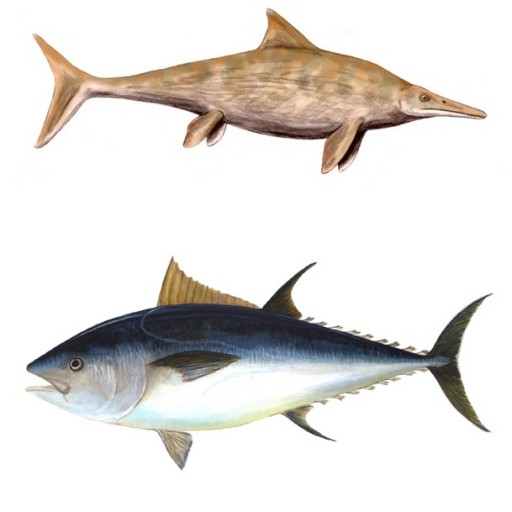 The ichthyosaur Stenopterygius quadriscissus (above), became widespread, in the late Jurassic and early Cretaceous (160-100Ma). Its body shape is similar to that of the Bluefin tuna (Thunnus thynnus (below). Tuna hunt f... moreish and squid at around 500m depth. This is possible because they have a high oxygen intake, fast metabolic rate, warm muscles, an energy efficient swimming style, and a higher heart rate and blood pressure than other fish (Images: Wikimedia Commons)

Modern tuna and lamnid sharks have converged into a similar ‘deep water sprint-predator’ ecological role.  These long distance migrants move constantly at a moderate speed, except for short fast bursts when chasing prey.  Chunky vertebrae stiffen their bodies at their core, reducing sideways movements except at the narrow ‘hinge’ before the tail.  The continuously active red ‘cruising’ muscles either side of the spine are warm, in marked contrast to most other fish.  In combination with large tendons, these muscles work like pulleys, flicking the fluked tail from side to side. The surrounding white muscles give extra power during short ‘sprints’.

The ichthyosaur Stenopterygius was tuna-shaped with chunky stacked vertebrae.  This stiffened body form suggests that these reptiles converged on the cruise-and-sprint deep water hunting role of modern tuna and lamnids.

Did ichthyosaurs have warm muscles like whales and tuna? 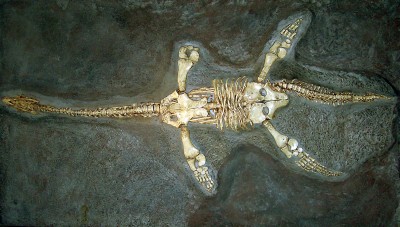 Cast of a skeleton of Hawkins’ plesiosaur (Thalassiodracon hawkinsi) from the Lower Lias strata at Street in Somerset; part of England’s Jurassic coast. These rocks are rich in marine fossils of all kinds including ... morefish, ammonites and belemnites (Image: Wikimedia Commons)

The isotopic proportion between the heavy 18O and the light 16O oxygen (the ratio is given as d18O) in the bones of living fish and marine animals decreases as body temperature increases.  In principle we can use cold-blooded fish fossils as a ‘thermometer’ to indicate the water temperature, and compare this against isotope-predicted body temperatures for other fossil animals from the same rocks.

Oxygen isotope data allows us to infer that Jurassic plesiosaurs and ichthyosaurs had body temperatures of around 35⁰C, much higher than that of their environment.  This indicates that they could generate heat, and may well regulated their body temperatures independently of their environment (homeothermy).  Modern warm bodied marine animals have to conserve their body heat.  This means it is reasonable to infer that ichthyosaurs used similar methods such as a counter-current blood circulation  system and/or heat-insulating blubber.

What happened to the ichthyosaurs? 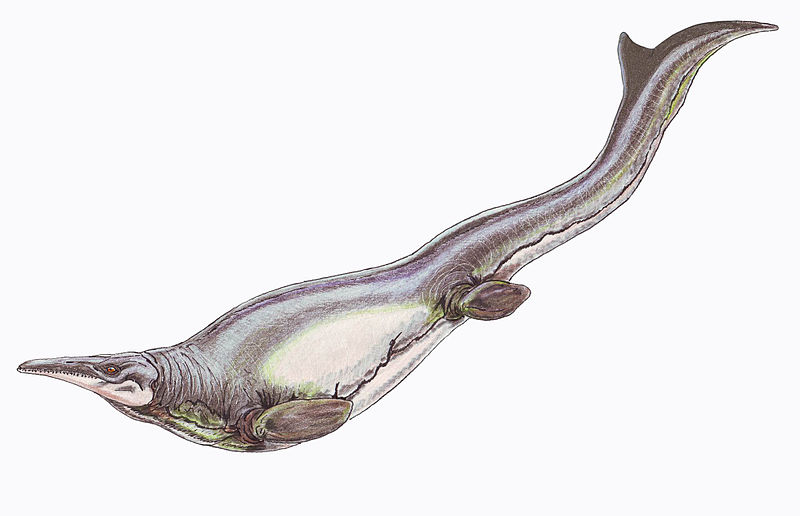 Plotosaurus bennisoni; a mosasaur from the Upper Cretaceous of North America. Most mososaurs lived in shallow coastal waters, although after the disappearance of the ichthyosaurs, some evolved into similar deep water sp... morerint predators. Plotosaurus had crescent-shaped tail flukes, equipping this animal to whale-like fast pursuit behaviour (Image: Wikimedia Commons)

Ichthyosaurs dominated the world’s oceans for around 150 million years, but then disappeared from the fossil record after the mid-Cretaceous (around 95Ma).  The cause of their sudden extinction remains a mystery.  The empty ecological roles that this created were later filled by mosasaurs; relatives of modern monitor lizards including the Komodo dragon.  In turn these reptiles died out during the Cretaceous-Tertiary mass extinction (65Ma), making way for the later evolution of modern whales, dolphins and tuna.