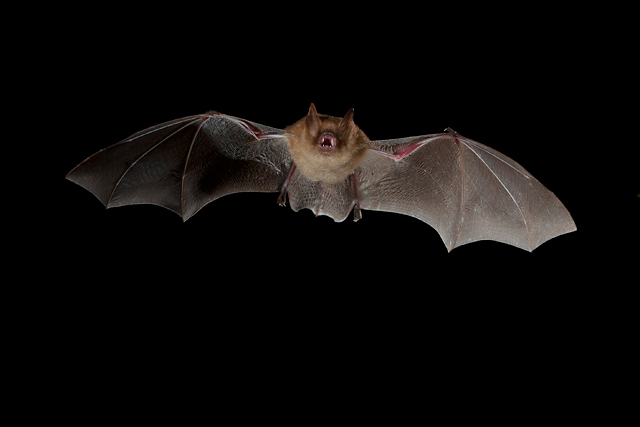 You are out in the dark, alone.  You become aware of a distant rhythmical clicking noise.  Sensing danger, you change direction and head for cover.  Seconds later you are punched by wave after wave of sound that hits your body like a machine gun.  The noise bears down on you, loud as an aircraft, faster and faster, blurring into a roar….

…You are a moth, taken by an echolocating bat.

Bats aren’t blind.  Their eyes work, but they live in a different world, requiring an extra sense.  Using high frequency sounds, also known as ‘biosonar’ or ‘echolocation’, they can see in the dark.  We see, hear touch, smell and taste by picking up cues in our environment.  Biosonar is completely different; there can be no signal without the call. 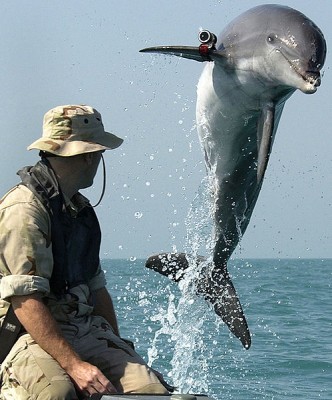 This really is seeing in sound.  Biosonar provides bats and some other animals, including dolphins, with a distinctive and sophisticated form of vision, giving detailed three-dimensional information over long distances in darkness or murky waters.

Bats illuminate their world with beams of directional sound

Most bats hunt using a range of frequencies, moving their heads to pulse sounds in different directions as they fly.  Lower frequencies produce wider sound cones like a floodlight, and higher frequencies focus the beam like a spotlight. 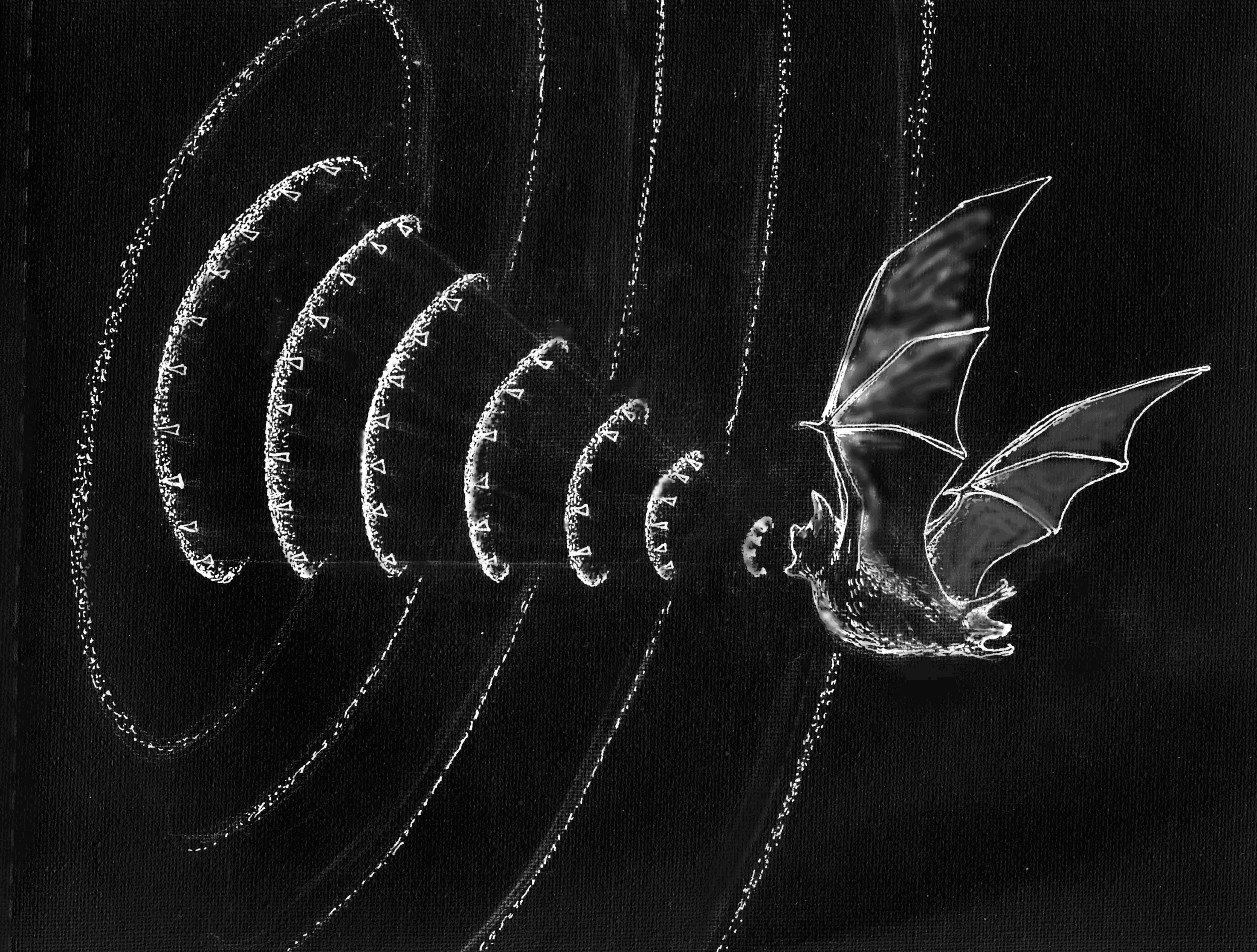 Bats and other echolocators emit pulses of directional sound that echo back from a target, returning them a cone of sonic information. They control the length and width of this cone by altering the frequency of their ca... morells and how far they open their mouths when producing the pulse. Larger mouths and higher frequencies produce longer, narrower ‘visual’ sound cones (Image: ©Simon Crowhurst)

Although one lives in the forest and the other in the ocean, the way bats and dolphins use biosonar when hunting is almost identical.  Dolphins, like bats, both shift the frequency of their clicks as they scan and lock onto prey, giving a characteristic ‘buzz’ of rapid calls as they take the target.  Sound travels more quickly under water, so dolphin sonar operates over a longer range.

Watch someone’s eyes as they examine something; their gaze jerks from one area to another.  These are known as ‘saccade and fixate’ movements.  They focus different parts of the image onto an area at the back of the eye called the fovea, which sees detail.  ‘Saccade and fixate’ eye patterns are found in all animals with good vision, and is a defining characteristic for how eyes focus on details. 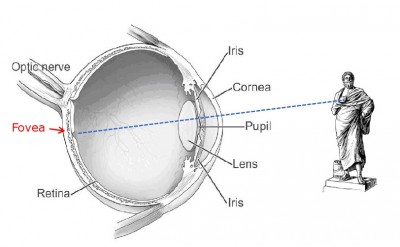 The human eye shifts its main focus in a series of ‘saccade and fixate’ movements. As this eye focusses on Sophocles’ hand, reflected light from the object lands on the fovea; the detail-harvesting area at the bac... morek of the eye. When looking at an object, our eyes move suddenly from one detail to another (the saccade), and then ‘fixate’ for a few moments onto these points of interest.Sophocles uses the idea of blindness in his story, ‘Oedipus Rex’, to illustrate how seeing is a highly active process, whether this is physical or metaphorical (Image: Composite of images from Wikimedia Commons)

When our eyes focus, they project an image onto an area at the back of our eyes known as the ‘fovea’.  This zone is specialised to pick up high levels of detail.  Any sense can be developed to pick up a high level of detail; we use sight, bats use sound, and star-nosed moles use touch.

Most bats hunt insects in the open air, listening for the returning echoes before making their next signal.  They use a combination of head movements and focussed sound cones to gain information in a classic ‘saccade and fixate’ pattern.  Wider head scanning and lower frequency calls provide a ‘wide angle’ view with less detail.  Higher frequency calls and a narrow range of head movements create an ‘acoustic fovea’; this focuses their sonic gaze onto a small area and recovers detail, much like ‘zooming in’ using a macro lens. 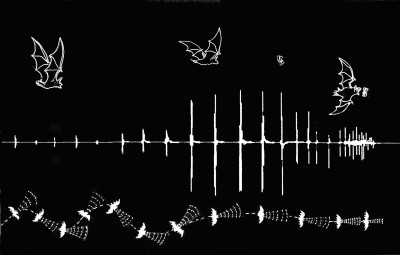 This artist’s impression shows the flight path (below) and behaviour (above) during the hunting sequence of a Common Pipistrelle bat (Pipistrellus pipistrellus), represented by the sound trace (centre). The process ha... mores distinct phases. During the initial ‘search’ (left), the call frequency is quieter (lower amplitude) and less frequent; this produces a wide angle sound cone.  Upon detecting and approaching a target (centre), the hunter’s calls increase in volume and frequency, which focusses the acoustic gaze.  As the hunter is locked onto its target (right), it produces a high frequency ‘buzz’. This highly focussed cone of sound allows the bat to perceive details, and manoeuvre very precisely as it closes in to take the prey.The time from detecting to taking the prey is less than a second.  (Image: ©Simon Crowhurst)

Horseshoe bats use echolocation in a different way; an adaptation to hunting in and around the spatially variable (and hence acoustically complicated) ‘surface’ of tree and shrub canopies.  They use mostly constant-frequency pulses, and listen for Doppler-shifted returning echoes.  The cochlear membranes of their inner ears respond over a broad frequency range, but have particular sensitivity within a very narrow bandwidth (their acoustic fovea).  When locking the sound pulse onto their prey, they alter their emitted call in order to keep the frequency of the returning echoes constant.  This allows them to focus on the frequency modulations caused by the fluttering movements of large insects.

Some tropical bats are nectar feeders.  Flowers hidden amongst the leaves are in an acoustically cluttered environment.  Many flowering plants using bats to assist with their pollination have evolved floral structures that act as ‘sound beacons’.  These are usually dish-shaped (parabolic) and bounce back an unique echo pattern that makes them become acoustically visible. 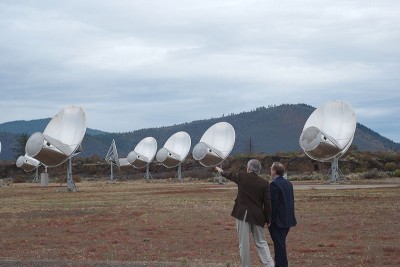 The Allen Telescope Array (ATA) built by the University of California, Berkeley and SETI (Search for Extra-terrestrial Intelligence). This offset Gregorian design reflects incoming radio waves caught by the large parabo... morelic dish onto the secondary parabolic reflector, which harvests the signal. The telescope is tuned to a frequency range from 0.5 to 11.2 GHz and will eventually have 350 antennae (Image: Wikimedia Commons)

Parabolic shapes also make excellent receivers.  The Search for Extra-Terrestrial Intelligence (SETI) project’s radio telescope is made of many parabolic ‘ears’, listening for radio transmissions from outer space.  Whilst we have invented technologies enabling us to hear bat calls and signals from beyond our planet, our own ears’ convoluted parabolic shape also captures sounds, and funnels them to our receiver; the ‘ear drum’ .

The dolphin calf is barely three weeks old.  His mother nuzzles at him, calling softly.  The calf responds, mimicking her…

We see red: dogs don’t. Our eyes emphasise contrasts, making it easier to spot colours, patterns, and rhythmical movements. But no two people see red in the same way. How has our vision evolved, and why?