Riddles in code; is there a gene for language? 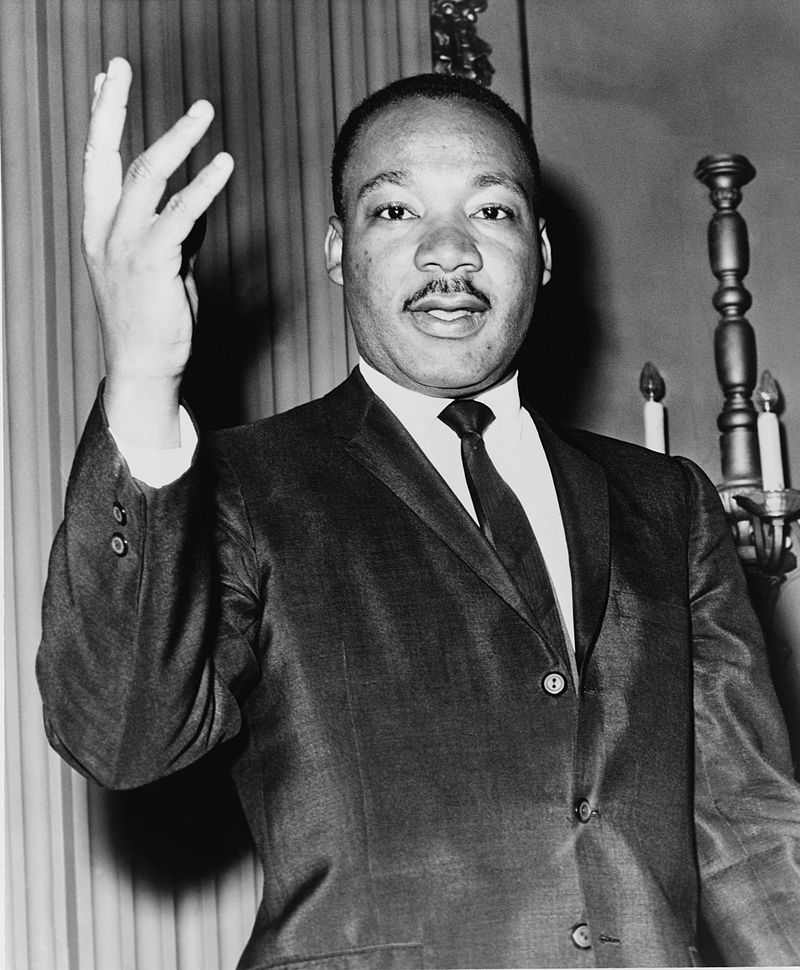 Martin Luther King’s ‘I have a dream’ speech on 28th August 1963 called for the people of the United States to honour the principles laid down in their constitution. His words resulted in the subsequent signing of the Civil Rights Act on 2nd July 1964 by President Lyndon B. Johnson. However his words resonated far beyond their intended audience, awakening a worldwide movement for racial emancipation and human equality which still continues today (Image: Dick DeMarsico, World Telegram staff photographer/Wikimedia Commons)

Words are like genes; on their own they are not very powerful.  But apply them with others in the right phrase, at the right time and with the right emphasis, and they can change everything.

Genes are coded information.  They are like the words of a language, and can be combined into a story which tells us who we are.

The stories we choose to tell are powerful; they can change who we become, and also change the people with whom we share them.

Language is a means for coding and passing on information, but it is cultural, and definitely non-genetic.  Nevertheless, for our speech capacity to have evolved, our ancestors must have had a body equipped to make speech sounds, along with the mental capacity to generate and process this language ‘behaviour’.  Our body’s development is orchestrated through the actions of relevant genes.  If the physical aspects of language ultimately have a genetic basis, this implies that speech must derive, at least in part, from the actions of our genes.

The hunt for genes involved with language led researchers at the University of Oxford to investigate an extended family (known as family KE).  Some family members had problems with their speech.  The pattern of their symptoms suggested that they inherited these difficulties as a ‘dominant’ character, and through a single gene locus. 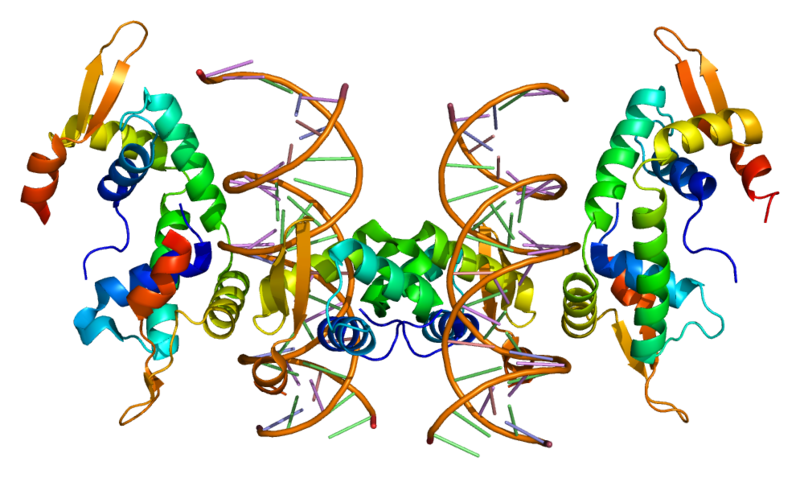 The FOXP2 gene encodes for the ‘Forkhead-Box Protein-2’; a transcription factor. This is a type of protein that interacts with DNA (shown here as a pair of brown spiral ladders), and influences which genes are turne... mored on in the cell, and which remain silent. This diagram shows two Forkhead box proteins, which associate with each other when active. This bends the DNA strand and makes critical areas of the genetic code more accessible (Image: Wikimedia Commons)

Discovery of another unrelated patient with the same symptoms confirmed that the condition was linked to a gene known as FOXP2  (short for ‘Forkhead Box Protein-2’).  This locus encodes a ‘transcription factor’; a protein that influences the activation of many other genes.  FOXP2 was subsequently dubbed ‘the gene for language’.  Is that correct?

Not really.  FOXP2 affects a range of processes, not just speech.  The mutation which inactivates the gene causes difficulties in controlling muscles of the face and tongue, problems with compiling words into sentences, and a reduced understanding of language.  Neuroimaging studies showed that these patients have reduced nerve activity in the basal ganglia  region of the brain.  Their symptoms are similar to some of the problems seen in patients with debilitating diseases such as Parkinson’s and Broca’s Aphasia; these conditions also show impairment of the basal ganglia.

Genes code for proteins by using a 3-letter alphabet of adenine, thymine, guanine and cytosine (abbreviated to A, T, G and C). These nucletodes are knwn as ‘bases’ (are alkaline in solution) and make matched pairs w... morehich form the ‘rungs of the ladder’ of the DNA helix. Substituting one base for another (as happens in many mutations) can change the amino acid sequence of the protein a gene encodes. Changes may make no impact on survival, allowing the DNA sequence to alter over time. Changes that affect critical sections of the protein (e.g. an enzyme’s active site), or critical proteins like FOXP2, are rare (Image: Wikimedia Commons)

Genes provide the code to build proteins.  Proteins are assembled from this coding template (the famous triplets) as a sequence of amino acids, strung together initially like the carriages of a train and then folded into their finished form.  The amino acid sequences of the FOXP2 protein show very few differences across all vertebrate groups.  This strong conservation of sequence suggests that this protein fulfils critical roles for these organisms.  In mice, chimpanzees and birds, FOXP2 has been shown to be required for the healthy development of the brain and lungs.  Reduced levels of the protein affect motor skills learning in mice and vocal imitation in song birds.

The human and chimpanzee forms of FOXP2 protein differ by only two amino acids. We also share one of these changes with bats.  Not only that, but there is only one amino acid difference between FOXP2 from chimpanzees and mice.  These differences might look trivial but they are probably significant.  FOXP2 has evolved faster in bats than any other mammal, hinting at a possible role for this protein in echolocation. 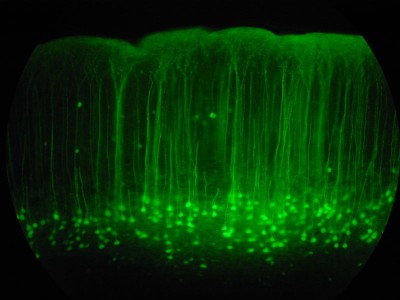 Changing the form of mouse FOXP2 to include these two human-associated amino acids alters the pitch of these animals’ ultrasonic calls, and affects their degree of inquisitive behaviour.  Differences also appear in their neural anatomy.  Altering the number of working copies (the genetic ‘dose’) of FOXP2 in mice and birds affects the development of their basal ganglia.

Mice with ‘humanised’ FOXP2 protein show changes in their cortico-basal ganglia circuits along with altered exploratory behaviour and reduced levels of dopamine (a neurotransmitter  that affects our emotional responses).  So too, human patients with damage to the basal ganglia show reduced levels of initiative and motivation for tasks.

This suggests that FOXP2 is part of a general mechanism that affects our thinking, particularly around our initiative and mental flexibility.  These are critical components of human creativity, and are as it happens, essential for our speech.

Basal ganglia circuits process and organise signals from other parts of the brain into sequences.  Speaking involves coordinating a complex sequence of muscle actions in the mouth and throat, and synchronising these with the out-breath.  We use these same muscles and anatomical structures to breathe, chew and swallow;  our ability to coordinate them affects our speech, although this is not their primary role. 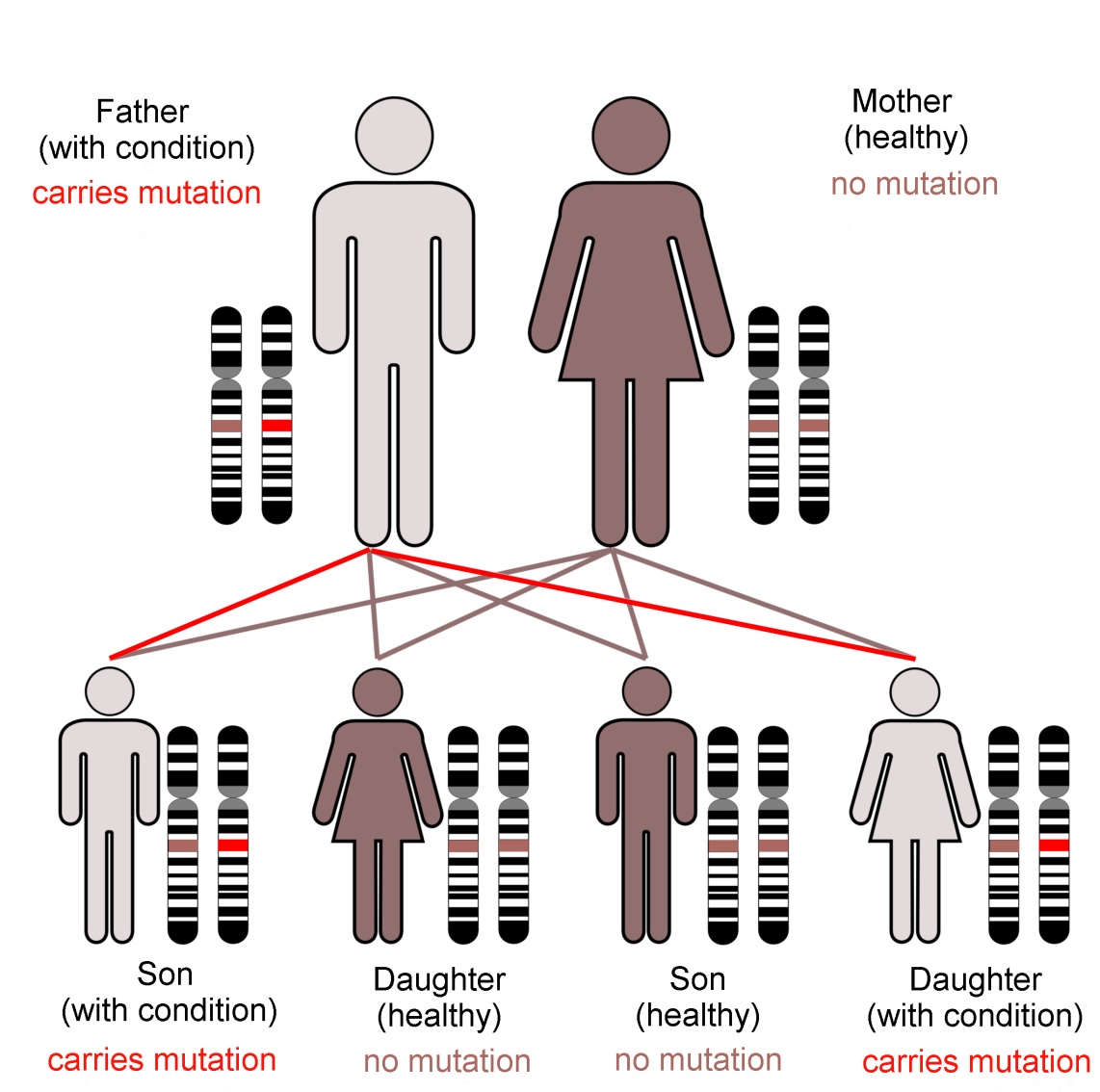 Family KE’s condition, caused by a dominant mutation in the FOXP2 gene, follows an autosomal (not sex-linked) pattern of inheritance, as shown here.Dominant mutations are visible when only one gene copy is present. In... more contrast a recessive trait is not seen in the organism unless both chromosomes of the pair carry the mutant form of the gene. The FOXP2 transcription factor protein is required in precise amounts for normal function of the brain. The loss of one working FOXP2 gene copy reduces this ‘dose’ which is enough to cause the problems that emerged as family KE’s symptoms (Image: Annotated from Wikimedia Commons)

In practice, very few of our 25,000 genes are individually responsible for noticeable characteristics.  Most genetically inherited diseases result from the effects of multiple gene loci.  FOXP2 is unusual because of its ‘dominant’ genetic character.  It does not give us our language abilities, but it is involved in the neural basis of our mental flexibility and agility at controlling the muscles of our mouths, throats and fingers.

In addition, genes are only part of the story of our development.  The way we think and subsequently behave alters our emotional state.  Feeling stressed or calm affects which circuits are active in our brain.  This alters the biochemical state of body organs and tissues, particularly of the immune system, modifying which genes they are using.

The dance between the code stored in our genes and the consequences of our thoughts builds us into what we are mentally, physically and socially.  This story is ours to tell.  By our experience, and with this genetic vocabulary, we create what we become.