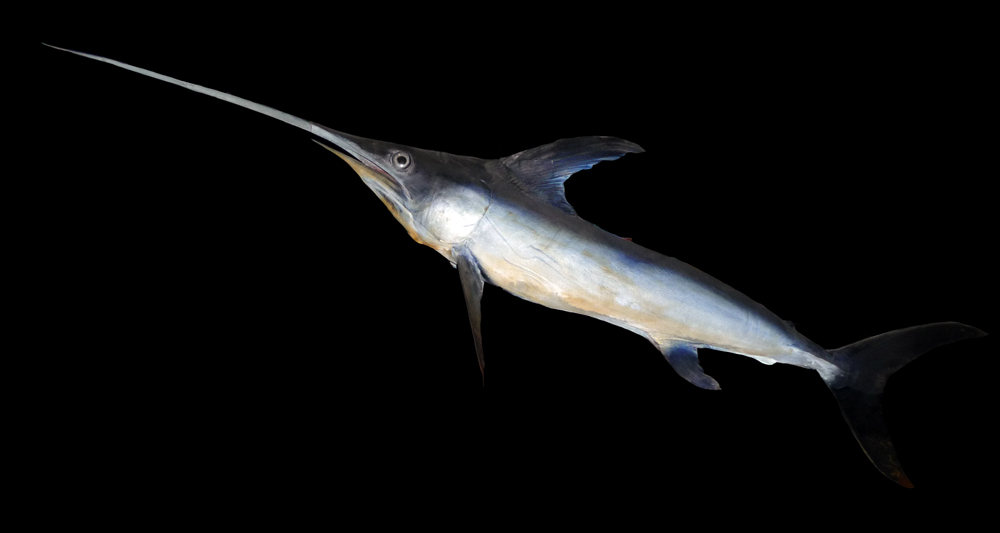 The swordfish (Xiphias gladius) is a migratory predator. From their spawning grounds in the Sargasso Sea, these deep water hunters range throughout the world’s temperate and tropical oceans. We most often see them on the menu; Atlantic stocks have declined massively due to overfishing (Image: Wikimedia Commons)

Some 300m below the ocean surface it is always twilight, and cold…  The water is barely above zero.  Fast-moving squid hide here from predatory fish which stay near the surface; at this depth, their nerves would be so slowed by the cold that their eyes could no longer see for them to hunt effectively.

But there are exceptions; a stealthy predator dives into this semi darkness.  Whilst the swordfish’s body temperature matches that of the water, its eyes and brain, crucially, stay toasty warm at around 23⁰C.

Why do swordfish have warm eyes? 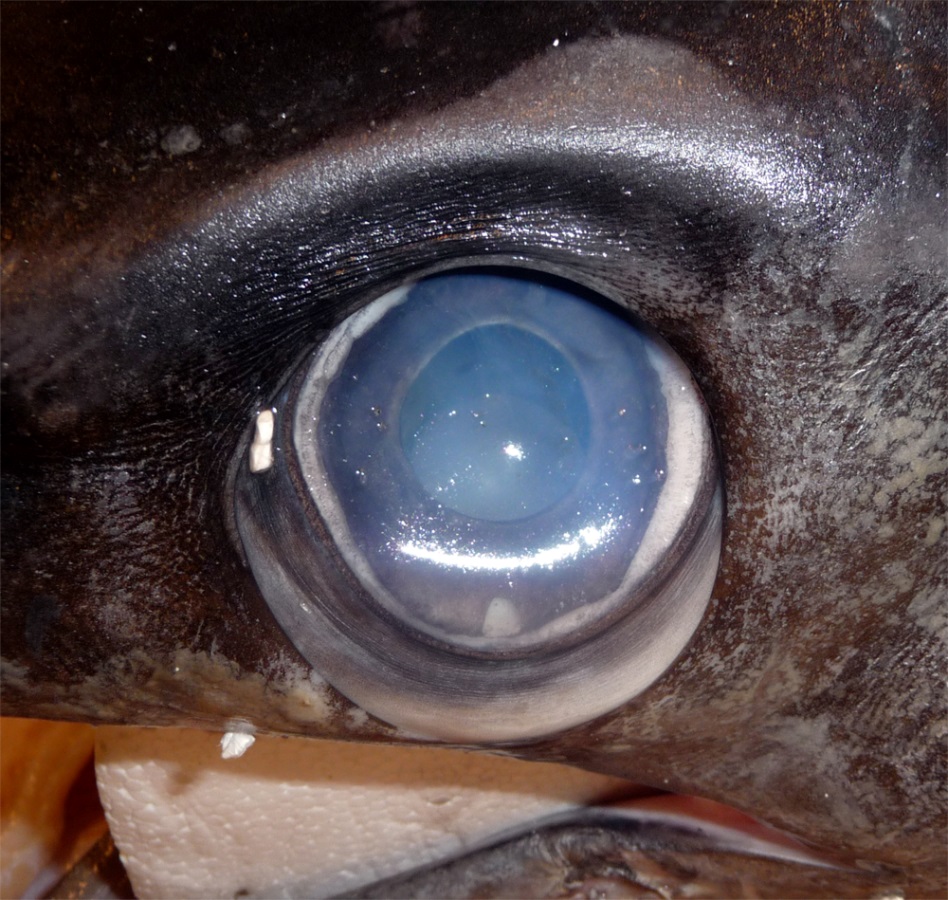 Close-up of a swordfish’s eye from a caught specimen. The eyes sit in a bony eye cup surrounded by a thick insulating layer of fatty tissue – part of which is visible here below the eyeball (Image: Wikimedia Commons... more)

A fish’s body temperature usually matches that of the water, meaning they are ‘cold blooded’ (poikilothermic).  Swordfish nerves, like ours and those of other vertebrates, operate only within narrow temperature limits.  The squid is also ‘cold-blooded’, but their elongated nerve cell axons however, are unusually wide, around 0.5mm diameter, and operate well in the cold, allowing them to maintain their fast movements and escape predators.

A few fish species, however, have evolved methods to generate heat in some of their tissues.  Under the chilly, low light conditions of the deep sea, the warm eyes of the swordfish keep its optical nerve signals rapid.  This allows it to register more visual signals per second than can other vertebrate predators.  This fast image resolution ‘slows down’ apparent time and amplifies details, allowing these stealthy hunters to discern the brief flashes of silver that reveal the fleeting movements of small fish and squid.

This prompts some key evolutionary questions;

– How is the swordfish’s eye heat generated?

– How does the swordfish keep the heat localised to its eyes and brain?

– How does keeping body parts at different temperatures adapt swordfish for survival?

How is the swordfish’s eye heat generated? 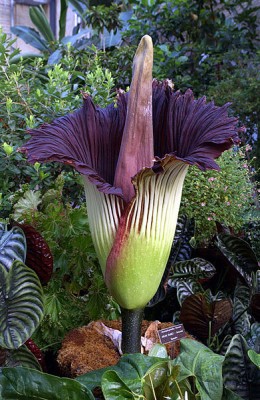 Heat generation is not limited to animals.  Some plants such as this Voodoo Lily (Amorphophallus titanium) have developed their own form of cellular heat generation, termed ‘non-shivering thermogenesis’. These unus... moreual plants heat parts of their floral organs to liberate scent messages into the air. This attracts insect pollinators, and may also protect its delicate reproductive tissues from the sometimes very cool night temperatures in its native tropical forest habitat (Image: Wikimedia Commons)

Swordfish eye muscles contain many brown-coloured cells that produce heat without shivering (non-shivering thermogenesis).  They have a high metabolism (respiration rate) and contain many of the organelles known as mitochondria.

Mitochondria are formerly free-living bacteria found inside nearly all animal, plant and fungal cells. They ‘breathe’ for their cell, converting sugars and oxygen into carbon dioxide and water.  This releases energy, which they use to pump hydrogen ions (H+, protons) from the internal matrix into their inter-membrane space.  They use the chemical energy gradient this creates to produce adenosine triphosphate (ATP), life’s energy storage compound.  These cellular energy factories are found in all animals and plants.

Humans and other mammals have brown adipose cells, also called ‘brown fat’.  The mitochondria in these cells make very little ATP.  Instead, ‘uncoupling proteins’ rearrange negatively charged fatty acids in the mitochondrial inner membranes to face into the inter-membrane space.  These associate with the positively charged protons, then ‘flip-flop’, carrying them back into the matrix and dissipating the energy gradient as heat.

How does the swordfish keep the heat localised to its eyes and brain? 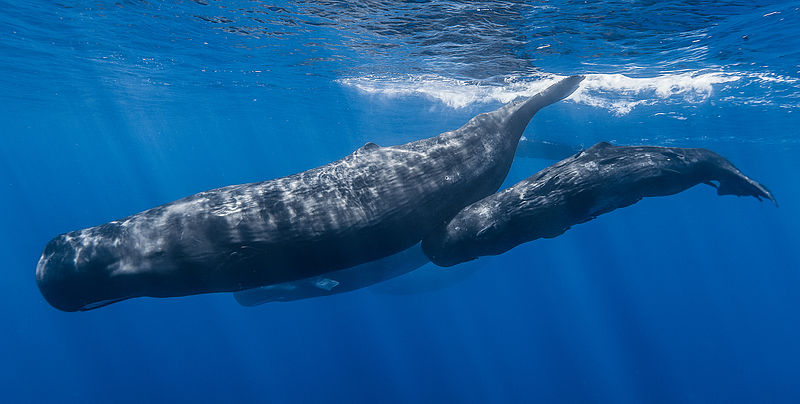 A pod of sperm whales (Physeter macrocephalus) diving off the coast of Mauritius. These animals are insulated by a thick layer of blubbery fat (Image: Wikimedia Commons)

When our bodies generate heat in a cold environment, this sets up an energy gradient; the bigger the differences between our internal and external temperature, the faster we cool.  Warm bodies in a cold environment lose heat quickly, unless insulated.  Birds use feathers, most mammals use fur and whales have blubber.

Fatty insulation over the swordfish’s skull retains heat, and helps keep its eyes and brain at a near constant temperature.  These tissues are homeothermic (maintaining a stable temperature), whilst the rest of its body is poikilothermic (allowing temperatures to vary with the environment).  Blood vessels supplying oxygen to the swordfish’s eye muscles are also arranged to retain heat.  These vessels run in parallel, allowing outgoing veins to warm incoming arteries (this is known as a ‘counter-current’ heat exchange system). 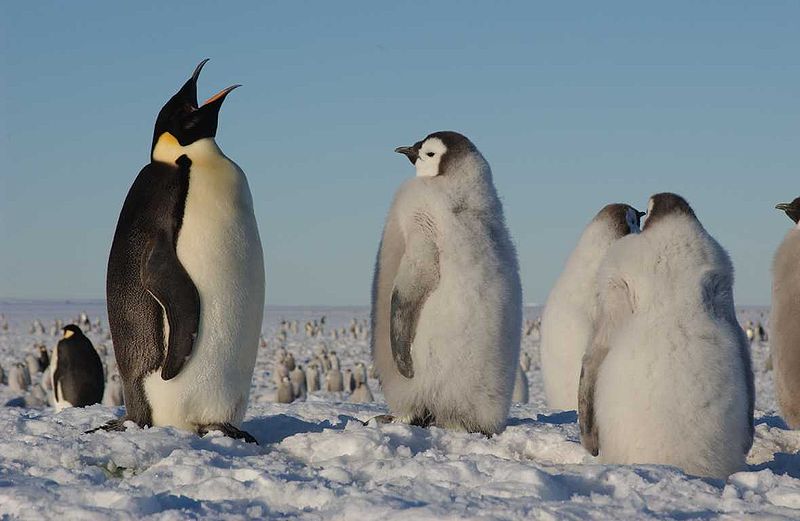 Emperor penguins (Aptenodytes forsteri) at Atka Bay, Weddell Sea, Antarctica. The wide webbed feet of these birds have a large surface area. Reducing the skin temperature here reduces the steepness of the heat energy gr... moreadient at the place where their bodies contact the ice. This reduces the heat loss from these uninsulated body tissues (Image: Wikimedia Commons)

Insulation (fur, feathers or fat), combined with a blood supply arranged to allow counter-current heat exchange, are found in many cold-adapted animals.  Lowering surface temperatures reduces the energy difference between a body and its surroundings, so minimising heat loss.  Warm-bodied migrating species such as wolves and many birds from polar regions use a counter-current exchange to reduce the temperatures of their legs and feet.  This means that their body parts in contact with snow or ice remain at just above zero.

How does keeping body parts at different temperatures adapt swordfish for survival?

Keeping your body at a different temperature from your environment requires a lot of energy.  The swordfish’s ‘dual temperature’ body isolates the heat and keeps it in one well-insulated region; this is the most energy efficient way for these ‘wait and sprint’ hunters to survive in this environment.  Tuna are another example of a fish with warm and cool tissues.  Their red muscles along their spine are warm, and sustain constant ‘slow’ strokes of the tail during their long distance migrations. 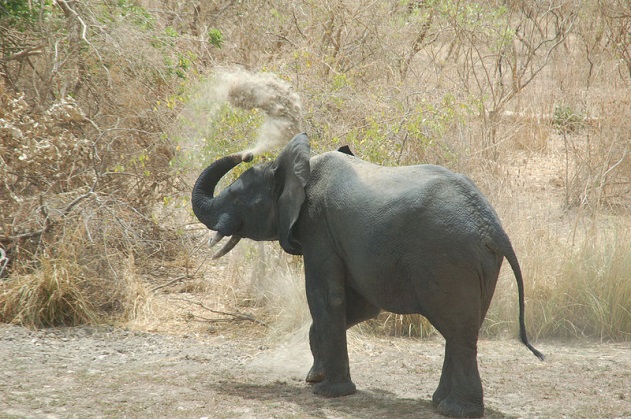 An elephant dust-bathing in the ‘W du Niger’ trans-border national park, Niger Elephants cool down by ear flapping, and water and dust bathing. Their ears have a large surface area for their volume, and strong blood... more supply. Dilating the capillaries in the ears to increase blood flow to the skin allows these surfaces to lose heat to the air. At higher temperatures elephants lower their metabolic rate, reducing their resting body temperature (Image: Wikimedia Commons)

When we sweat, water evaporates and cools our skin surfaces.  Dogs and many other mammals pant to evaporate water from their tongue and mouth cavity.  Elephants lack both sweat glands and a panting reflex; these are possible remnants of their aquatic ancestry.

In very high temperatures they enter a whole-body heterothermic state.  They slow their metabolism, lowering their morning body temperature.  They then absorb daytime heat, raising their temperature above 36.7⁰C, and radiate this ‘stored’ heat at night.

Varying the temperature at times like elephants, or in certain tissues like swordfish, is known as heterothermy.

A cat hears a scuffling sound amongst the garbage.  She stands in shadow, all senses poised. A few moments pass;…

We see red: dogs don’t. Our eyes emphasise contrasts, making it easier to spot colours, patterns, and rhythmical movements. But no two people see red in the same way. How has our vision evolved, and why?