What a peculiar question. If you want to fly use some sort of aerofoil and design it to maximize lift and minimize the amount of drag. Tricks like hovering and high speed manoeuvres, that would be the envy of a Spitfire pilot, are a reminder that flight involves a great deal more than flapping wings. Despite looking wildly different all biological aerofoils work in the same way. The membranous wings of an insect and the skin attached to the enormous fourth finger of an extinct pterodactyl (literally “flying finger”) or splayed across the four elongate fingers of a bat may all look very different but they all serve to keep their owners aloft.

Birds do it differently, using elongate scales derived from the theropod ancestors that we call feathers. Now then, surely feathers are a sort of comb? Pick one up and see how easily you can separate the tiny branches (the barbs) that arise asymmetrically on either side of the central strut (the rachis). To restore the smooth aerodynamic surface of the feather, the pressure of your fingers (or that of the passing air) will rejoin the barbs because attached to the barbs are even finer branches (the barbules) with arrays of hooks. The point is the bird needs a feather not a comb! And yes, some insects equipped with hind- and fore-wings can lock them together in-flight using a number of ingenious devices, some of which include hooks. Once again, however, it is a wing and not a comb. 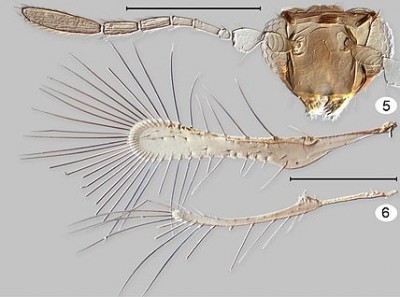 No prizes where the name for the tropical fly Tinkerbella came from. It is after that infuriating little fairy Tinkerbell that zooms around the set of J.M. Barrie’s play Peter Pan. Remember also P.G. Wodehouse’s Madeline Bassett who thought “that every time a fairy blows its wee nose a baby is born, which, as we know, is not the case” (Stiff Upper Lip, Jeeves). If real fairies are very dangerous, the schmaltzy version envisaged by that drip Madeline has mandatory gauze-like wings. Not so with Tinkerbella; here the wings have undergone an extraordinary change from the typical fly wing. Now they consist of an exceedingly narrow membrane from which arise a series of elongate and incredibly thin hairs, rather like a comb in fact.

Why this transformation? The answer revolves around the truly minute size of Tinkerbella, whose body length never exceeds a quarter of a millimetre (for techies 250 μm). A close relative, Kikiki (which means “tiny bit” in Hawaiian) is even smaller (c. 190 mm) and in either case at this scale the air through which these flies fly behaves very differently from everyday experience. With larger animals, and that includes most insects, the air flows freely and the effects of viscosity (in essence the “stickiness” of the fluid, technically a measurement of the resistance of any fluid – including air – to an imposed stress) are minimal. In the world of Tinkerbella it is a very different story because at their scale the viscous forces of air predominate. As a result air is so “sticky” that it cannot flow between the elongate hairs of the wing. So we arrive at a very economical arrangement where the total area of the wing, to the tips of the hairs, is far larger than it might first appear.

The balance between the forces of viscosity and inertia (related to body mass) is described by something known as Reynolds Number. Air is roughly one hundred times less viscous than water but also relative size (Tinkerbella versus a blue whale) and the speed of locomotion determine if one lives in a world of high or low Reynolds numbers. To us the lower Reynolds number world is deeply counterintuitive. Memorably described as being equivalent to a leisurely swim in a pool of molasses, in this regime when a bacterium ceases swimming its stopping distance is 0.1 Ångstroms, equivalent to one tenth the diameter of a hydrogen atom. Fairyflies hover on the margins of this strange world and it has even been suggested that they “swim” through the air rather than fly. Most likely not, but these flies are by no means the only insects to enter such a Lilliputian world and not surprisingly one hall-mark are those bristly wings. And animals smaller than amoeba beg many questions. In themselves the processes of miniaturization are startling enough, but how on earth can a brain that size still manage to work?

No, don’t be ridiculous Oh dear, nothing more awkward than watching the Professor losing his grip on reality. Let’s get…