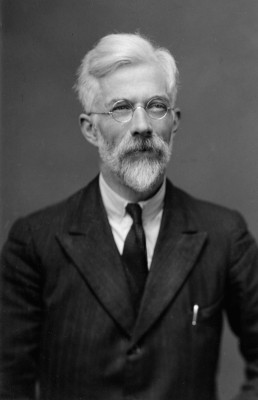 Sir Ronald Aylmer Fisher (1890-1962) was an evolutionary biologist and statistician. He is perhaps best known for inventing an array of revolutionary statistical procedures that could be used within the natural sciences. These include:

– ANOVA (analysis of variance), which is a test that allows the identification of significant differences between three or more samples so long as the populations from which these derive follow the normal distribution and exhibit homogenous variances;

– P-value, in effect the probability with which we accept a mistake when we reject a null hypothesis that is actually valid. In other words, a p-value equal to 0.05 (which is the standard) means that when we conclude that there is no statistically significant difference between two or more samples (that is, when we reject the null hypothesis) there is 5% chance that there is indeed a significant difference but we missed it.

Fisher’s statistical techniques revolutionised the way data could be queried and analysed, enabling scientists to test hypotheses in an entirely objective way and allowing us to explore patterns in massive datasets where any qualitative visual analysis is impossible. However, Fisher’s contribution to our understanding of evolution goes far beyond the statistical tests with which he is most widely and commonly associated.

The world-renowned statistician and geneticist Professor Anthony Edwards was the last undergraduate that Fisher accepted. When asked why Ronald Fisher deserved to remembered as the great scientist that he was, Edwards responded that it was a difficult question to answer because Fisher was:

“..one of those people whose work is at a level of subtlety that it’s really quite difficult to explain why he should be revered so much as he is – as a great scientist. It’s one thing to split an atom, or discover the electron, or do the other things for which Nobel Prize winners around Cambridge are known for. But it’s quite another thing to work at the level of subtlety that Fisher worked at – both in statistics and in evolutionary biology.” (pers. comm. 2014)

An even more challenging question we asked Edwards was what, in his opinion, were Fisher’s three most significant contributions to science. Edwards stated that if one is to identify three key contributions from Fisher’s work, then one has to think in terms of which publications you would wish to draw people’s attention to. Edwards’ suggestions are described here in his own words:

(i) “Statistical Methods for Research Workers from 1925, which ran to 40 editions and which completely changed the map of statistical practice in science from that time on. And that’s probably the best known of his contributions. Of course, it relies so much on work that he himself did in the preceding ten years or so, so at the time it was extraordinarily novel. There’s a paper from 1922 called On the mathematical foundations of theoretical statistics which really sets the scene for the writing of this book.”

(ii) “The Genetical Theory of Natural Selection from 1930. That is an extraordinary book because it’s really only now, and I do mean now – the last few years, that people have – in evolutionary biology – have actually got around to reading it carefully. Now of course it always had its followers, but they’ve been few and far between. So, there is now work coming out of the thoughts in that book, 84 years after it was written and so much of what happens in modern evolutionary biology can be traced either directly to that book, or to people whose names you’ll be familiar with, particularly W.D. Hamilton whose ideas come from that book anyway and have been made extended and made so well known by people of the next generation, but there’re few and far between. So, the number of serious readers of that book from 1930 to about 2005 you could count on the fingers of one hand. And indeed it was one of Charles Darwin’s sons, Leonard Darwin, who was a great supporter of Fisher, a great friend of Fisher’s, who warned Fisher that his great book would be extremely well known in the long-term but it really would take quite a long time, and that’s exactly what’s happened.”

(iii) “On the dominance ratio. Nobody had a finer understanding of what Darwin was saying than Fisher. Whether he could communicate that and extend it is a different question, but nobody had a finer understanding….So, what should it [the third point] be? Well I think we ought to go back to before 1930 and look at the year 1922. And in that year Fisher published a paper called “On the dominance ratio”. And it’s a most extraordinary paper, it’s really the foundation paper for population genetics and mathematical genetics because it does so many things: it proves for the first time the stability of a genetic system if the heterozygotes are at an advantage over the homozygotes. And that’s very fundamental to mathematical genetics. It introduces what later came to be known as the Wright-Fisher model – for modelling stochastic processes in genetics. Quite wrongly called the Wright-Fisher model because Fisher introduced it all by himself and it wasn’t until 1931 that Sewall Wright wrote about it.”

In many ways, Fisher’s contribution to science was not appreciated in his own time. The sheer depth of his knowledge and the subtle level at which he worked, meant that to a large extent he was academically isolated.

When asked why it has taken the biological world so much longer to appreciate Fisher’s work than the statistical world, Edwards remarked: “Well, it was partly Fisher’s fault, because he made this one huge contribution of writing “The Genetical Theory of Natural Selection” and he wrote it in his beautiful English, with a lot of mathematics hidden behind the English, because he thought that he wanted to express his views to biologists who were not at home with the mathematics. And a consequence of this is that the mathematicians ignored it and the biologists didn’t understand it. But nowadays we have a much greater number of people in biology who can do the mathematics and there have been many studies over the years recreating the mathematics which lies behind Fisher’s verbal descriptions in The Genetical Theory.”

FortyTwo extends its appreciation and thanks to Professor Anthony Edwards.

Gregor Mendel was an Austrian botanist, who is now widely regarded as the father of modern genetics.