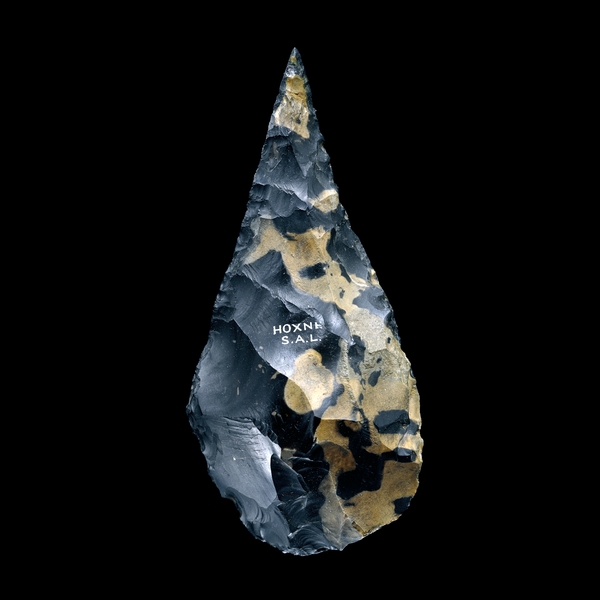 John Frere (1740–1807) was a British antiquary. In 1800 he became the first person to systematically describe and make public the discovery of a type of Palaeolithic stone tool known as ‘handaxes’. The handaxes he described came from what would later be acknowledged as one of the most important Lower Palaeolithic sites in Europe; Hoxne in Suffolk, England. Frere noted that the tools came from a gravel deposit that was 3-4 meters below the surface, and was overlain by layers of sand and brick-earth. Frere interpreted the overlying deposits as fluvial; something that would later be confirmed as correct.

Frere’s publication was short (just two pages) but it was critical; it was the first paper to describe handaxes as ‘man-made’ and to note their association with ancient animal bones. These observations challenged a commonly held belief at that time, namely, that the Earth had been created in 4004 BC. Frere (1800, p.205) stated that “..the ground in question does not lie at the foot of any higher ground, but does itself overhang a tract of boggy earth, which extends under the fourth stratum: so that it would rather seem that torrents had washed away the incumbent strata and left the bog-earth bare, than that the bog earth was covered by them, especially as the strata appear to be disposed horizontally, and present their edges to the abrupt termination of the high ground“. 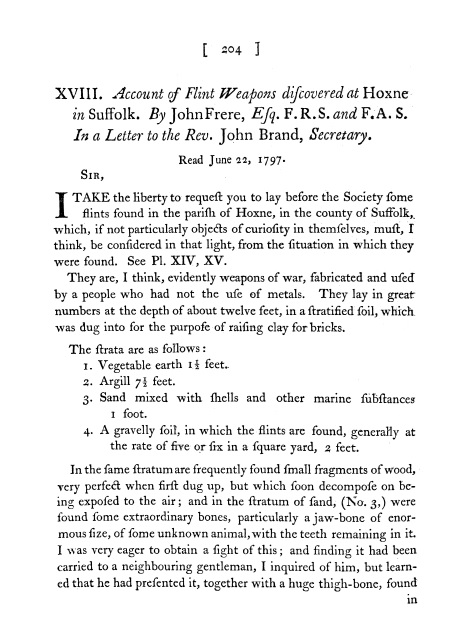 The first page of John Frere’s seminal publication “Account of Flint Weapons Discovered at Hoxne in Suffolk” in the journal Archeologia in 1800 (Image: Reproduced with the kind permission of the Societ... morey of Antiquaries of London)

John Wymer and Richard West (1999) sum up the revelation that must have occurred to Frere as he looked at that Suffolk landscape: “Looking behind him, as now, he realised that the present valleys of the Dove, Waveney and Gold Brook, with their floodplains well below him, had eroded since the deposition of the brickearth and other sediments above the palaeoliths. The vast volume of Norfolk and Suffolk which had been washed away since the handaxes had been covered by the sediments in the pit convinced him of the enormous amount of time that must have elapsed between their manufacture and the present day, thus the immense antiquity of mankind”.

Frere first reported his observations in a letter to the Society of Antiquaries of London (of which he was a Fellow) in 1797, and it was subsequently published in Archaeologia in 1800. Frere also gave the Society of Antiquaries five handaxes from Hoxne, and these remain in the possession of the Society to this day (although four are on long-term loan to the British Museum). Seismic in its implications, as sometimes happens in science the publication received virtually no comment at the time.

It wasn’t until nearly 60 years later that the importance of Frere’s publication was finally acknowledged. In 1859, archaeologist John Evans and geologist Joseph Prestwick visited what would become another important and long-studied Palaeolithic site, this time in northern France. Here in Abbeville, stone tools were recovered from undisturbed deposits that were 11 feet below the surface, but at the time people were unaware that anything similar existed in Britain. After returning to England, Evans found himself at the Society of Antiquaries waiting upon friends. Upon looking into the case that housed Frere’s handaxes, Evans was:

..absolutely horror-struck to see in it three or four implements precisely resembling those found at Abbeville..

Although unlabelled, Evans traced the handaxes to Frere and his Archaeologia paper and subsequently visited Hoxne to test Frere’s theory regarding the nature and age of the deposits. That same year (1859), Prestwick submitted a paper to the Royal Society in which they concluded that Frere’s observations were correct. Since that time, Hoxne has been intensely studied and is now widely accepted as dating to around 400 thousand years ago. Frere remains largely unacknowledged, but despite this scientific anonymity he deserves to be considered the father of Palaeolithic archaeology and curiously there is a familial link to somebody else of deserved fame; John Frere was the great-great-great-grandfather of the palaeoanthropologist Mary Leakey (of the well-known Leakey family of archaeologists).

Do animals use cosmetics?

A cat hears a scuffling sound amongst the garbage.  She stands in shadow, all senses poised. A few moments pass;…