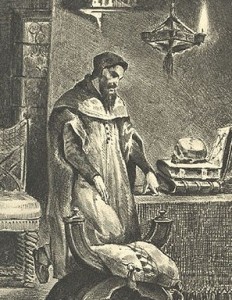 "What do you say to me, bare grinning skull?" The character Faustus battles aloud with his conscience in this illustration by Eugene Delacroix. The play’s author; scientist, poet and playwright Wolfgang Johannes Goethe, proposed that animals’ bodies develop from a primal, repeating modular form. The idea that bodies develop from segment-like, functionally specific zones in the embryo underpins our current understanding of animal development (Image: Wikimedia Commons)

Goethe loosens the earth from the skull, and holds it up to the sun.

Turning the fractured bone back and forth, he gasps.  A series of marks appear inside the cavity, reminding him of the vertebrae.  He has looked at this pattern many times, but without seeing what lights up before him today.

Here is the shadow of a blueprint; the ‘primal repeating units’ of animal bodies, from which their many variations form.

Watch this baby babbling; her limbs move, often in time with her sounds.  the coupling of gestures and vocal calls are widespread amongst social vertebrates.  And the story began with fish. 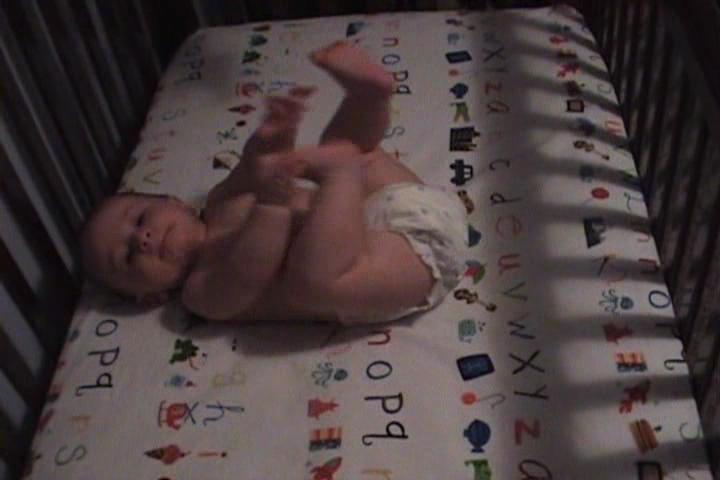 Watch this baby babbling.The rhythmical arm and leg movements of human infants as they vocalise reveals some ancient neural wiring, inherited from our common vertebrate ancestors, and now shared with other modern verteb... morerates from elephants through reptiles, amphibians and birds to fish (Image: Wikimedia Commons)

The rhythm of our breath keeps us alive.  Conscious muscle movements are made through spinal nerve reflexes, but like our heart beats, the repeating sequences of muscle actions which fill and empty our lungs are outside our conscious awareness.

The movements behind repetitive activities like breathing are driven by rhythmic nerve impulses from ‘neural oscillators’.  These pattern-generating circuits, located in the central nervous system, are known as ‘Central Pattern Generators’.

To breathe, to speak and to swallow we use the same internal tube; that is our throat (the pharynx).  These activities are necessarily exclusive; consider what happens when a crumb ‘goes down the wrong way’.  Speech therefore needs to be coordinated with our breathing. 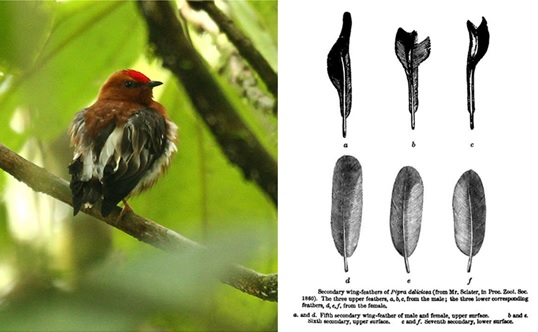 The male club-winged manakin (Machaeropterus deliciosus) from the cloud forests of Ecuador makes sounds by rapid wing vibrations. This rhythmic movement is driven by the vertebrate vocal central pattern generators. The ... moreline drawing (shown right), from Charles Darwin’s book The descent of man, shows how the male birds’ secondary flight feathers (top ) are modified for sound (the equivalent feathers from the female bird are shown in the bottom row). Watch. (Images: Wikimedia Commons)

We make vocal sounds by passing air through the larynx as we breathe out, at the same time as vibrating our vocal folds (vocal cords).  These actions involve coordinating a sequence of repetitive movements inside the throat with the repeating muscle actions that drive our breath.

Communicating with sound evolved long before animals emerged from the sea onto land and began to breathe air.  Many fish use pectoral fin movements as communication gestures; some also generate sounds by fin waving.

In species of vocal fish, the calls are coordinated with these pectoral fin signals.  Significantly, the muscles operating these social communication cues are controlled using the same neural oscillator ‘module’.

‘Central Pattern Generators’ are neural oscillators that generate a rhythmic output, used to control repeating muscle movements.  These ‘neural metronomes’ were first discovered in insects, and produce their steady pulse without any sensory stimulus.  In contrast, our other nerves operate on a ‘stimulus-response’ basis.

The predictable and repetitive movements we use for breathing, chewing and walking can speed up and slow down, but the sequence in which these muscles work (the oscillatory cycle) does not change. Oscillators are known ... morein mechanical, chemical and biological systems. This simple (undampened) oscillating spring can alter its speed, but the nature of the movement remains the same (Image: Wikimedia Commons)

Central Pattern Generators reveal what can be called our ‘deep homology’.  First discovered in insects, all vertebrates, including ourselves, have these ancient neural circuits.  They links vocal calls with gestures, and coordinate our ‘fins’ with our speech.

How do Central Pattern Generators work?

We consciously control our limbs through spinal nerve reflex arcs.  In contrast, rhythmic movements controlling oscillating cycles are driven by Central Pattern Generators (CPGs).  These autonomous modules in the central nervous system produce a rhythmic output (like a neural ‘black box’).  CPG modules are comprised of a dense interconnected local network of neurons; a neural ‘node’.

These nodes are organised into three levels, each with a different function, and in each case, the parts of the circuit ‘higher’ in this organisation regulate the outputs of those below. 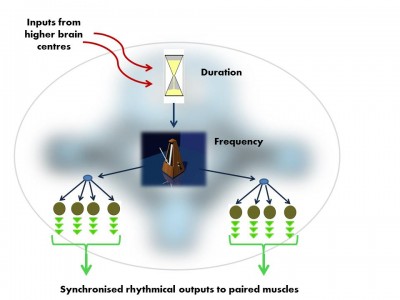 The vocal Central Pattern Generator used to produce basic signals for social communication, is organised in much the same way in fish, frogs, birds and mammals. Like all Pattern Generator modules it has a hierarchical o... morerganisation.i. pre-pacemaker cells set the duration of the output,ii. pacemaker neurons set the frequency of the regular nerve impulseiii. Motor neurons transmit the pacemaker’s rhythmic output to the muscles (Image: Wikimedia Commons)

In the developing embryo there are functional units, ‘segments’ which give rise to our vertebrae and their associated nerves and muscles.  The nerves from each of these ‘segments’ form our local sensory spinal reflexes and also the CPG modules.  As needed, higher brain centres trigger these ‘neural motors’ to produce their rhythmical nerve impulses and drive all of our rhythmical movements from walking to chewing.

CPGs controlling rhythmic movements of the tongue, throat and breathing (including the vocal neural oscillator module) are in the lower brainstem and neck.  The CPGs that drive the rhythm of our walking are low down in the spinal cord, in the thoracic and lumbar regions. 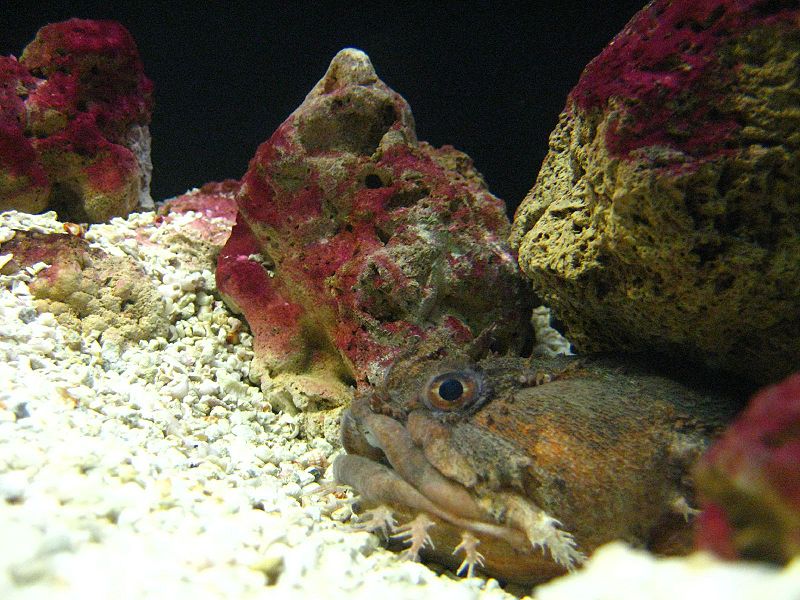 Vocal fish such as this Oyster toadfish (Opsanus tau) produce calls in one of two ‘output modes’. This is controlled by testosterone, which reduces the threshold of nerve stimulus needed to initiate calls. In ‘nor... moremal’ mode, these fish are able to sustain only slow rhythmic grunts. ‘Mating mode’ speeds up these sounds into a buzzing drone. Mating calls are made only at night during the spawning season, when testosterone levels are high.In this video clip the closely related plainfin midshipman fish (Porichthys notatus) demonstrates both call types (Image: Wikimedia Commons)

Toadfish vocalise with either a sequence of repetitive grunts during aggressive encounters or the prolonged drone of their mating call.  In both cases, each nerve impulse from the vocal pattern generator produces a single synchronised contraction in their sonic muscles; this muscle pair flexes the rigid walls of the swimbladder, producing a ‘grunt’.  This sound receives no further processing.  As a result, its tone is rather mechanical.

Our voice, like that of frogs, birds and mammals, also begins with this simple rhythmic sound pulse.  This initial sound is then processed into croaks, calls songs and speech.  Our neck  allows us to create resonant areas in the throat which amplify certain frequencies.  Pitch is affected by vocal fold (vocal cord) tension, and manipulation of our tongue and lips produces precisely articulated words.

Why is ‘talking with our hands’ still a part of our language? 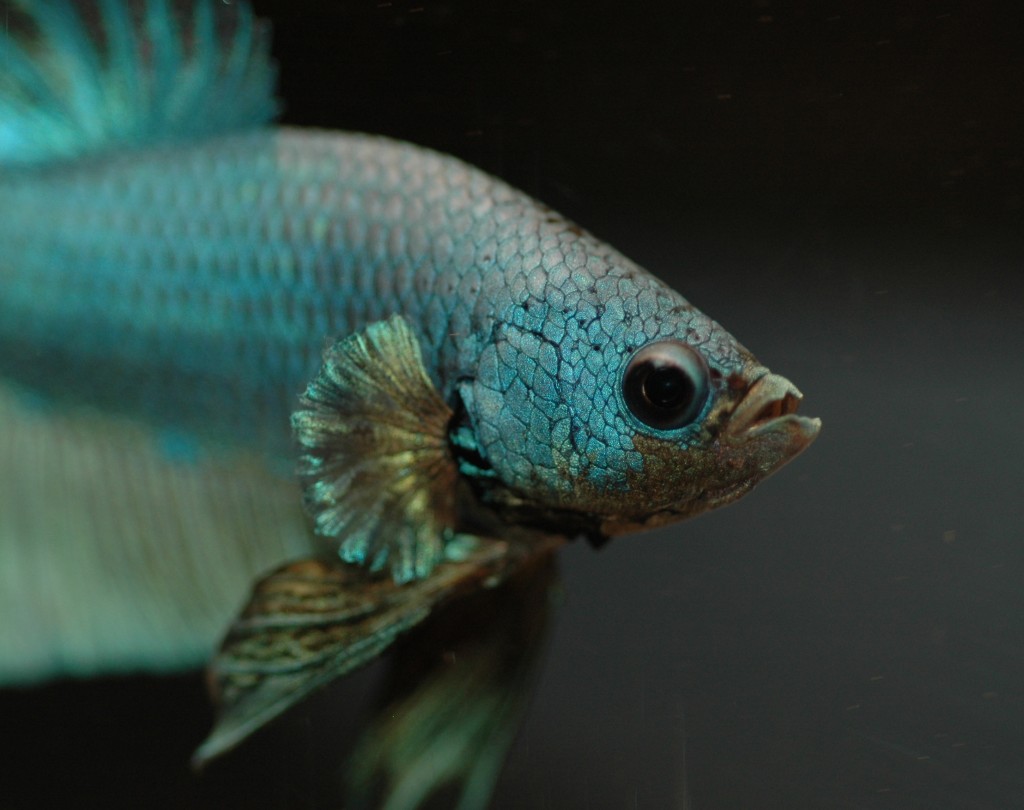 Many vocal fish make synchronised gestures with their front (pectoral) fins during mating calls.  These motor nerve connections from our ancient common ancestor are retained in other vertebrates.

People blind from birth move their hands when they talk.  Our vocal Pattern Generator circuits connects with both our larynx and pectoral muscles, coordinating our speech with our ‘body language’.  We subconsciously move our hands as we communicate thanks to these rhythmic central circuits.  As in all other vertebrates, we have inherited these from (as Palaeontologist Neil Shubin puts it) our ancestral ‘inner fish’.

No, don’t be ridiculous What a disgusting suggestion! Uck!! A criminal conviction for bestiality will earn you a thumping prison-sentence…