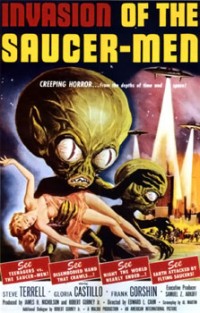 Film poster of the 1957 sci-fi comedy ‘Invasion of the Saucer-Men’ (Image: Wikimedia Commons)

The day the world had been waiting for, hope mixed with fear, First Contact … In perfect formation the five star-ships descended in orchestrated synchrony, landing dead centre in Lord’s cricket ground. The invited audience rose simultaneously to their feet as slowly the hatch opened on the mother ship. A ramp rippled down and a figure emerged. The running commentary began: “yes, yes, our first extraterrestrial, bipedal – of course, binocular vision, camera eyes, just as expected, holding something, at least it isn’t a laser cannon, but body very slender, must be a low-gravity home, but the head! the head! The brain must be at least five times larger than ours ….”

With a puff of smoke the extraterrestrial and all the ships vanished. All a mirage. A brain that size is a biological impossibility. With relief the crowd sank to their seats and play resumed … England all out for 42 runs.

So why shouldn’t hyper-intelligent aliens possess vastly larger brains? After all, a sperm whale or an elephant have respectively brains six times and three and a half times more massive than ours (which weighs in at c. 1300 g), but on the other hand these leviathans are a great deal heavier. When you make allowances for our smaller body mass then the human brain is disproportionately large, approximately seven times bigger than it “ought” to be. In the last five or so million years hominid brain sizes have almost tripled. So why not extrapolate? Twice the size, maybe like our fictional aliens even five times bigger? Why not?

There are several reasons, but amongst the most compelling is that the rates of growth of the so-called grey matter (principally neurons, that do the “talking”) and the white matter (mostly axons, that transmit the “news”) differ substantially, that is each tissue falls on a markedly different growth slope (in the trade this is an example of allometry). Any increase (or for that matter decrease) in brain size, therefore, is constrained by the different growth rates of the grey matter and white matter, with the latter increasing disproportionately faster.

So what happens when you extrapolate brain size beyond the current ceiling set by humans? Quite a substantial increase is certainly possible but as the volume of white matter continues to outstrip the grey matter at roughly five to six times the present size the brain would consist almost entirely of neurons, communication would break down, and you’d stop thinking.

No wonder the extraterrestrial might be able to hold a cricket bat (and after several months of reading and observation begin to vaguely understand the game), but at least so far as animals are concerned there are definite limits to how large a brain can become, and for that matter how small. How, why and when brain size changes continues to attract the finest minds.

It is still not entirely clear what drove our massive encephalization but probably technology and crowds were a potent combination: flint-knapping (and a high protein diet) and big social groups (remembering that your great uncle’s cousin owes you a drink) are mile-posts on the road to human exceptionalism. But maybe our very strange evolutionary trajectory will open new doors where brains are complemented, enhanced, perhaps even replaced?

Any sort of computation is strictly bound by the iron laws of physics which not least will govern how much information can be stored, how quickly it can be processed, and how the excess heat can be dumped. Extrapolation is usually a risky business and the lines between science on the frontiers and science fiction not only shifts continually but is always fuzzy. But in the company of Anders Sandberg let’s envisage a series of so-called “Jupiter brains”. We’ll kick off with “Zeus”, approximately twice the size of the Earth, built of diamondoid material that contains about 1037 nodes and every second undertakes 1049 operations. And that is just for starters because on the “drawing board” are plans for “Uranos” and beyond that “Chronos”.

And what might these “brains” be thinking? Will they be passing the time of day solving several trillion simultaneous equations while providing five-day forecasts for all five million planets of the Galactica, before taking a few milliseconds off to nail the next twelve prime numbers? Alternatively might they be moving into completely new territory, literally beyond our comprehension? The philosopher Thomas Nagel reminds us that our neurological kit may have found surprising redeployments since our Pleistocene ancestors spent their time dodging sabretooths, but that doesn’t mean we can understand everything. When Wordsworth wrote in The Prelude the lines “The marble index of a mind for ever/Voyaging through strange seas of Thought, alone” he was thinking of Newton, but maybe this poet had a deeper intuition of the further shores of wisdom.