Can a fly ride a bicycle? 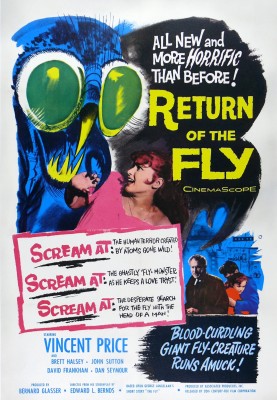 Original poster for the 1959 science-fiction film Return of The Fly (Image: Wikimedia Commons)

Perhaps in the convoluted recesses of the surrealist brain, or maybe in those dreams just before waking, when premonitionary whispers combine with hallucinatory clarity, then we might witness the epic Tour-des-Mouches. Watch the flies whizz past, front legs gripping the drop-handlebars, whilst the hind pairs pedal furiously, head down but empathy-free compound eyes fixed on the road ahead and in the far distance the leading yellow-jersey. Or maybe not. To paraphrase Irina Dunn, a bicycle is going to be as much use to a fly as it is to a goldfish.

Why then, and in the august surroundings of the Royal Society, did Reinhard Wolf and his colleagues ask the assembled company “Can a fly ride a bicycle?”. It is a deceptively clever question. Rather than persuading flies to hop on to nano-cycles, we should step back and look at what they do best, fly. Their manoeuvrability is breath-taking. Far too fast for the human eye to register, high-speed photography is required to reveal their mastery of aerial acrobatics. In this situation, any hard-wired system that attempts to link vision and flight control (specialists like to talk about sensori-motor coordination) is going to end in disaster. Autopilot might be fine for the tedium of a trans-oceanic crossing, but when it is the oldest game in town – boy fly chasing girl fly – then vision, nerves and muscles must combine to allow extremely flexible decisions, with sudden turns (up to ten a second), abrupt accelerations and extraordinarily high angular velocities. And yes bicycles might be a useful vehicle when it comes to human courtship, but surely there is no other connection?

One needs to step back. Are systems such as those that link vision and locomotion working in simple tandem for a particular and dedicated function, or can they be redeployed for a novel use? The variety of ways in which a human can, if need be, steer a car indicates that correspondingly the visual-motor system of a fly could, in principle, be employed to cycle off into the sunset. A counterpart can be found when a pilot clambers into his Spitfire. High above Kent on that late afternoon of September 15th, 1940, not only are tight manoeuvres a matter of life and death, but so too is accurate deflection shooting. What we learnt a few million years ago on the savannah is now reassigned, from a fast trot and a well-aimed stone in the Pleistocene to the saving of a nation by “The few”.

It is another example of the logic of evolution. Neither the variety of sensory inputs (and vision, hearing, touch can all be employed) nor the mode of life – be it flying or walking – can conceal the fundamental identity of motor control by which insects and vertebrates move. And there are more precise similarities. Let us compare the walking of a mammal, say a dog, and an insect, such as a cockroach. Yes, they both walk using legs, but the parallels are much more exact and at first sight astonishing. To be sure Roverhas four legs and Archy has six, but the same principles apply. The task of the hind-legs (a pair in Rover, two pairs in Archy) is to provide a propulsive thrust. The front pair behave differently and can engage in complex movements, not least those of rotation, feeling their forward to the next foot-fall and serving to act as brakes that ensure a smooth progression over rugged terrain. And that incidentally explains why a wheel, let alone a bicycle, has never evolved.

A bicycle is a triumph of technology but notwithstanding the bone-jarring experience of a typical cycle-“path” for all intents and purposes (other than devotees of extreme sports) it requires a flat surface. So did the fundamentals of sensori-motor control arise far back in time, residing in the common ancestor of the fly (or cockroach) and Spitfire pilot (or dog) or alternatively did they evolve independently? In reality it hardly matters if a bicycling fly makes more sense because the basic circuitry required one day to fly or cycle was lurking in a sluggish worm-like creature on the floor of a Cambrian sea and then separately elaborated or because whatever the starting point only one type of circuit board actually works. Let us finish by engaging in another display of sensori-motor co-ordination. Hats off!! To whom? Why to a fly whose brain is smaller than a pin-head but engages in aerial acrobatics that no Spitfire pilot could ever achieve. Who, apart from a Cambridge don, needs a bicycle?