Do animals ever go to hospital? 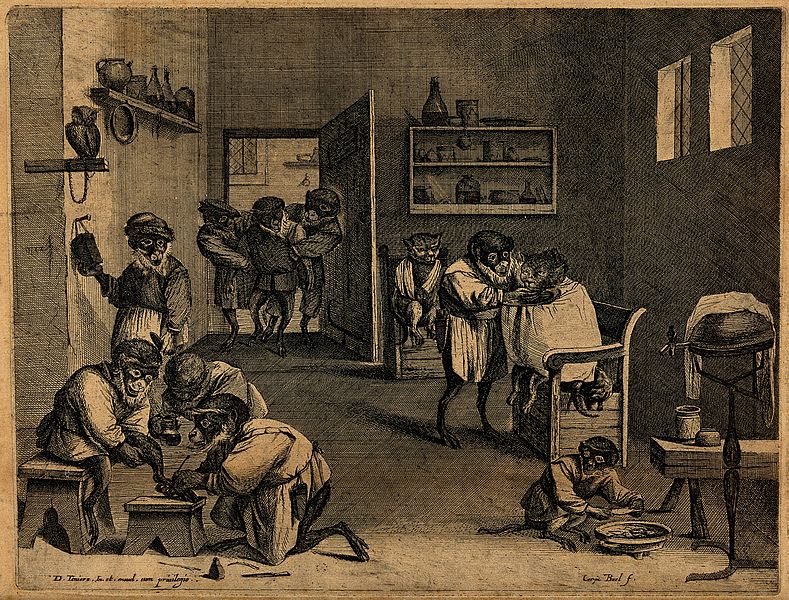 Simple question, simple answer: they either recover or more likely die. Gaping wounds inflicted by vicious predators are bad enough, not least when suppuration sets in, but the world swarms with other dangers. Hordes of pathogenic micro-organisms are joined by a myriad of parasitic horrors that collectively engage in a relentless onslaught to undermine and disable the body’s defences. Out in the jungle there are no well-lit pharmacies, briskly efficient first-aiders, let alone blaring ambulances speeding towards the hospital. In the natural world Darwin meditated on “death [as] generally prompt [so] that the vigorous, the healthy and the happy survive and multiply” [Origin]. Hobbes took a much darker view. He saw little consolation in our life, other than it being “Solitary, poor, nasty, brutish, and short” [Leviathan]. When it comes to the animal kingdom, no prizes who is right.

Well, it is not every day that you see a capuchin or owl monkey drooling copiously, having chewed a plant – or perhaps grabbed a passing millipede – and then proceeding to vigorously rub the sticky mess all over its fur. Nor need this remain a solitary occupation. Social anointing is even more enjoyable: watch the little chaps dribble as they roll and squirm together in a wet heap. All good, clean fun? One needn’t rule out the pleasure principle, but either alone or collectively such anointing evidently provides an effective barrier against mosquitoes and other pests. Across the world and deep in the Indonesian jungle the orang-utan leads a pretty strenuous life and, oh boy, those joints sometimes ache. But a remedy is to hand; what better than an anti-inflammatory application?

First chew some leaves of the plant Commelina, work it up into a soap-like lather, and apply to those tender spots. Much better, isn’t it? Their African counterparts don’t appear to employ such lotions but when it comes to self-medication the chimpanzees draw on an impressive arsenal of plants, chewing and swallowing stems, roots and even bark. They may taste horrible but that’s the whole point. Rich in so-called secondary compounds, in excess they are toxic but carefully managed these plant compounds help to combat a range of ailments. Swallowing hairy leaves is another route to recovery because as they progress through the gut they scour away tapeworms and other pesky parasites. Chimpanzees are careful in what they eat and keen observers of their neighbours’ gastronomic predilections. Gorillas perhaps are less choosy but not only do they also engage in self-medication but those living in the cold and wet mountains evidently dose up with plants to combat pulmonary infections and maybe acclimatize to the high altitudes. In one way or another the apes and monkeys display an impressive range of self-medications, but so too do some of the more primitive relatives in the form of lemurs. In the Madagascan sifaka pregnant and lactating females up their consumption of tannins, evidently to boost the immune system.

Nor is the medicine chest only filled with plants. Fancy a teaspoon of soil, maybe from a termite mound? Geophagy is the name and although sometimes labelled “famine food”, it can confer real benefits as an anti-acid and to absorb toxins. The further reaches of self-medication enter some pretty strange territory. Consider the Great bustard. Males display in leks so the females are extremely choosy, carefully examining the cloacal region of potential mates for signs of infection. Both sexes eat Blister beetles, which are a potent source of cantharidin, otherwise notorious as the aphrodisiac “Spanish fly” and definitely not recommended in the bedroom. Males gobble more beetles and the highly toxic cantharidin not only is a potent therapeutic against sexually transmitted diseases but as important provides a clear signal to the girls that here is a chap that can take the punishment.

But in one way are all these examples so surprising? After all birds and primates score pretty highly when it comes to cognitive sophistication. Surely animals like insects aren’t going to engage in self-medication? On the contrary, Monarch butterflies stock up with prophylactic toxins, while Woolly bear caterpillars dose themselves with alkaloids to ward off parasitic flies. Fruit-flies are equally at risk from parasitic wasps and so they turn to the bottle. Not literally, but by either laying their eggs in alcohol-rich food or having the larvae indulge in some heavy drinking the toxic alcohol may not do the fruit-flies that much good, but the invaders fare even worse.

Be careful, however, not to assume automatically that behaviours such as anointing are always self-medication. In the White-faced monkey their chewing wild chilis and then anointing themselves with the mixture rapidly transforms them from sober citizens to animals in the grip of an hallucinogenic trance as they stagger, roll and somersault across the forest floor. And what of that decidedly odd behaviour known as “anting”? Best known in birds the ants typically are obtained either by picking them up or simply rolling in a nest. The ants chosen do not bite but defend themselves by releasing blasts of formic acid. So a reasonable assumption is that anting provides a deterrent against pathogens and ectoparasites lurking in the feathers. Yet the evidence hardly stacks up, and it may be that anting is simply for the sake of enjoyment, maybe with auto-erotic undertones.

And stimulation goes beyond ants. What about that tame Blue jay that liked nothing better than rapidly stroking the undersides of its wings with a glowing cigarette? Others report birds as little more than arsonists, anting with glowing embers and then accidentally dropping them on combustible material. Nor does the link between birds and cigarettes end there. Some birds lace their nests with protective aromatic plants, but those that collect cigarette butts enjoy a mixed blessing. The nicotine wards off unwelcome insects, but the many other toxins leaking out of the butts have a decidedly negative effect on the chicks. Tobacco, of course, is only one of an enormous armoury of drugs that can both calm, heal or occasionally kill. Across the Pleistocene world our hominin ancestors most likely noticed animals involved in self-medication and so began to experiment. Even today traditional medicines are used to treat everything from coughs, headaches and infections, not to mention provoking sexual desire and inducing trance-like states, respectively summoning us to deeper pleasures and new worlds.