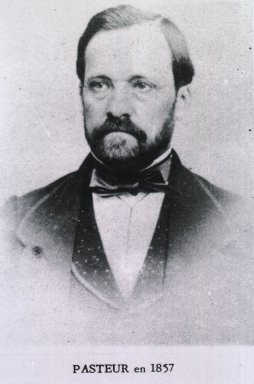 Louis Pasteur in 1857 (Image: US National Library of Medicine/Wikimedia Commons)

The French chemist and microbiologist Louis Pasteur (1822-1895) was a key figure in the history of medical science. Although his name may not sound familiar, it is likely that you refer to him more frequently than you might think: one of Pasteur’s many contributions to science was in the realm of global health. In particular, he invented pasteurisation, the process of heat-treating food (such as milk) in order to reduce spoilage and remove potentially hazardous micro-organisms such as Salmonella which cause food poisoning.

The impact of pasteurisation on human health has been immense. For example, according to Ronald Schmidt and Michael Davidson (2008, p.1) in the United States, where pasteurisation of milk has been carried out for almost 100 years “..the incidence of milkborne illness in the US has decreased from approximately 25 per cent of all reported foodborne illness outbreaks in 1938 to less than 1 per cent of reported outbreaks today”.

Pasteur’s development of the pasteurisation process arose out of his research into germs. One of his fundamental breakthroughs was to show that some diseases are caused by microbes. This is called the ‘Germ theory of disease’ and remains one of the pillars of medical knowledge. The kernel of Germ Theory existed as early as the seventeenth century, when the Dutch scientist Antonie van Leeuwenhoek – often referred to as the father of microbiology – was the first person to observe micro-organisms, but he had no reason to make any link between these tiny life-forms and certain diseases. How then did Pasteur make this connection?

The first revelation came from studying the rate at which liquids such as milk start to spoil and noting that spoilage was accompanied by an increase in micro-organisms. He later extended his experiments to show that the same process could be observed in solid foods, such as meat. Pasteur took his experiments to the next level by demonstrating that the micro-organisms could be destroyed by heating, an observation that eventually led to the process of pasteurisation. He then made the link between an increase in the number of micro-organisms causing the spoilage of foods and compared it to the process taking place inside the human body when infected with certain diseases; the diseases were caused by the multiplication of specific types of micro-organisms.

Pasteur also conducted experiments to show that the micro-organisms that contaminated liquids and foods (and the human body) originated in the air. This was another critical discovery because it disproved a long debated theory called ‘spontaneous generation’. Spontaneous generation held that micro-organisms, such as those causing the putrefaction of foodstuffs, could arise spontaneously within the food.

Pasteur, on the other hand, argued that the micro-organisms entered the food from the outside – from the air. As explained by René Dubos (1960, p.43) “It would take a long volume to describe the many different kinds of experiments that he [Pasteur] performed while dealing with the problem of spontaneous generation. A spectacular one was to remove with a fine needle the juice from grapes with undamaged skin, and to show that if this was done with all precautions necessary to avoid contact with air or objects, the juice did not ferment until yeast had been added to it.”

Pausing on the bank, the lead female gathers her herd, ensuring that she is followed before she plunges in.  The…