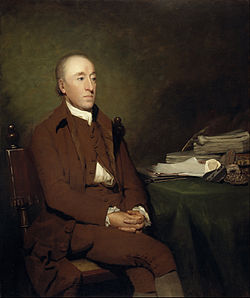 Portrait of James Hutton painted by Sir Henry Raeburn, dating to around 1776 (Image via Wikimedia Commons)

Scottish geologist James Hutton (1726-1797) can rightly be regarded as the father of modern geology. He made many contributions to the natural sciences, but his crowning achievement was the idea of what would come to be known as ‘uniformitarianism’.

The term ‘uniformitarianism’ (and its converse, ‘catastrophism’) was coined by the polymath William Whewell in the nineteenth century, but it was already a revolutionary concept in the eighteenth century. This was because it opened the door to the concept of ‘deep time’, that is the immensity of geologic time and the dawning realisation that Earth is of extreme age. To put the enormity of that concept in perspective, bear in mind that although it has now been established that Earth is around 4.6 billion years old, in Hutton’s time, scholarship (based mostly on the Bible) placed the age of Earth at a mere six thousand years of age.

Indeed, until the nineteenth century, there was a world-view known as ‘catastrophism’ which argued that Earth’s geological features (such as mountains) had been formed as a result of numerous sudden, short-lived catastrophic events (such as floods) which had been initiated by supernatural means and thus could be concordant with the Bible. As a consequence, fossils found in different stratigraphic layers of the Earth were seen as evidence that animals had been repeatedly wiped out in order to make way for new ones; proponents of catastrophism had no reason to think that species could change through time or that one species could evolve into another.

Hutton fiercely opposed the idea of catastrophism, and his seminal three volume Theory of the Earth, published between 1785 and 1789, argued that Earth had been shaped over extremely long periods of time by the same natural processes that operate today. These would include not only ‘large’ events such as earthquakes and volcanic eruptions, but also the everyday, more subtle erosional processes, such as rainstorms.

Simply put, Hutton argued that there was no need to invoke supernatural forces to explain the geologic record. The apparent permanency of features such as mountains and coastlines was merely a result of our short lifespans; if human beings were to live for eons, they would witness the rearrangement of the Earth’s surface – mountains would erode into plains, sediments on the sea floor would lithify (turn to stone) and new mountains would be created by uplift. Shells found in the rocks of mountain tops had not been washed there by floods (biblical or otherwise), but had been elevated from the sea-floor by the same natural processes we see today; the same processes and the same physical laws that have always operated upon the Earth.

Despite the potentially revolutionary outlook of Hutton it is only fair to note that his antiquated and tedious writing style did much to hinder the dissemination of his ideas. Indeed, so taxing was his prose style that it wasn’t until the concept was picked up by the likes of scientists such as John Playfair and Charles Lyell in the early- and mid-nineteenth century respectively, that the theory became popularised. In brief, great ideas may moulder if they are not communicated in a palatable fashion. Science matters, but so does the style in which it is presented.

Uniformitarianism facilitated a revolution in our understanding of the evolution of Earth, challenging the long-held but erroneous concept of catastrophism and in that, the prevailing view that the planet was only 6000 years old. To quote Jean Jones (1984, p.15), Hutton “..liberated geological thinking from any restrictions of timescale..”

Although Hutton established the concept of deep time for future geologists, he himself never attempted to calculate the age of the Earth because contemporary techniques were not up to the task. Wisely, he wrote:

“But, as there is not in human observation proper means for measuring the waste of land upon the globe, it is hence inferred, that we cannot estimate the duration of what we see at present, nor calculate the period at which it began..” (Hutton, 1785, p.28)

Charles Lyell was perhaps the most famous geologist of the nineteenth century, and one of the first notable scientists to throw their intellectual weight behind Charles Darwin’s theory of evolution by natural selection.