“Let’s get this right. Did you say see heat, or just feel it? No question of the latter, very useful around the kitchen, thank you. But I feel the hot-plate, I don’t see the actual infrared radiation”. Of course lots of animals possess the capacity to sense heat, not in a general way but with considerable acuity that is central to their lives. Vampire bats and bed-bugs in search of a blood dinner, beetles and other insects flying towards forest-fires – no, no, not for suicidal self-immolation, but to lay their eggs in the warm wood – and of course snakes like the rattlers and pythons that sense the infra-red radiation through special pits on their head. And why can’t they actually see the heat source? Now, I know you may not be a physicist but let me try to explain why this is impossible. Heard of the electromagnetic spectrum? Well, that’s a start. Now then visible light ranges from the ultraviolet (UV) towards the infrared, which we sense as warmth. UV has a shorter wavelength and packs more energy. That is why it is so dangerous, skin-cancers and other horrors. For vision to work the process of excitation in the retina needs a certain energy to trigger a signal and infrared radiation simply doesn’t pack the necessary punch. Infrared is invisible, OK? 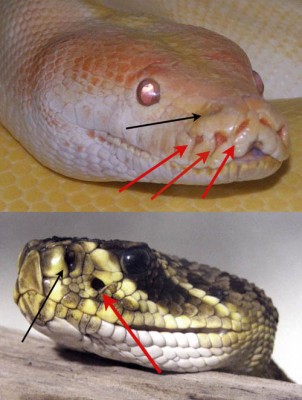 A python (top) and rattlesnake. Black arrows point to nostrils, red arrows point to the pit organs which allow them to “see” specific wavelengths of radiant heat (Image: Wikimedia Commons)

Let’s take a closer look at those infrared detectors in the rattlesnake Crotalus and their relatives (collectively the crotalids). They are a nifty piece of biological engineering, consisting of a deep pit divided by a very thin membrane with a tiny opening but otherwise serves to define an inner and outer chamber. This membrane is rich in blood vessels, packed with mitochondria and the nerve cells that actually detect the incoming infrared radiation. These pits are fantastically sensitive, easily capable of working at the level of thousandths of a microwatt.

It turns out that this pit is much more like an eye, specifically the so-called pinhole camera-eye, than you might expect. Pinhole eyes have no lens, and the apertural size of the opening to the pit means it has a poor focus, but the comparison still holds. Not only is it exceedingly sensitive, but its ability to detect thermal contrasts means that it sees cool areas as “shadows”. But there is more. The nerves that inform the brain about the infrared radiation feed into the same areas as the real eyes. In fact the snake has four eyes, two camera-eyes and two pinhole eyes, and because they all overlap the snake enjoys stereoscopic vision.

“What is it like to have the mind of a bat?” asked the philosopher Thomas Nagel. At first sight “seeing” infrared or echoes (as do bats and whales), let alone electrical fields (like many fish) seems utterly alien. But is it? Remember your eyes really aren’t like cameras at all. Yes, they usually have a lens, can focus and control the apertural size (the pupil), but the images are constructed in the brain. Second, the melding of the infrared signals and optical signals in the brain of the rattlesnake is by no means unique and abundant evidence exists for the combining of different sensory pathways. So for an animal to “see” it requires some sort of nervous system, but the information doesn’t need to be transmitted by the optic nerve. So too to detect the signal you need a protein receptor, but it doesn’t need to be the canonical rhodopsin.

Animals possess an extraordinary range of sensory receptors, each designed to receive one or other of the incoming torrent of sensations. So they can be in the form of molecules to taste, pressure waves as sound, or electromagnetic waves in the form of infrared radiation. So too animals have neural equipment to make sense of these sensations, but lurking behind all this is the Big Question. This is the one that leads to a shuffling of feet and awkward clearing of throats, the question of qualia and consciousness. The redness of the sunset, the taste of garlic, the sadness of G minor. Are these just neurological fictions?

Can flies get drunk?