Can you have blue blood? 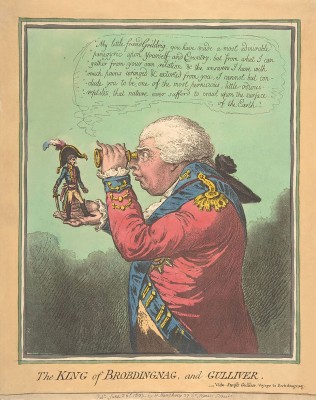 Only if there is something seriously wrong with you. Either you are suffering from delusions of grandeur: “Am I not the King?” “Off with their heads” and so on. More likely, and just as alarming, is that you are very ill: for one or other reason your blood is seriously under-supplied with oxygen and as a consequence you are turning an alarming bluish colour. Prick up your ears if your doctor mentions cyanosis.

That is the story for vertebrates like yourself and other groups that have opted to use haemoglobin as their respiratory protein. Here the key element is iron, but there is an alternative and this is to use copper. The name – haemocyanin – hints at the colour because when oxygen is bound to this protein the blood has a bluish colour but when the oxygen is surrendered to the nearby tissues then the blood becomes colourless. And who has this blue blood? Principally two groups of invertebrates: the molluscs and the arthropods.

Both iron (in haemoglobin) and copper (in haemocyanin) can donate or lose an electron (chemists talk about valency states) so oxygen can be locked to the metal for transport in blood or released to feed the metabolic furnaces. Different elements but common principles, but there is more, much more. To the gourmet molluscs mean squid and arthropods equal lobster, but back in the laboratory coffee-time buzzes with chat about lophotrochozoans (molluscs, annelids and so on) and ecdysozoans (arthropods, nematodes, and penis-worms (priapulids in polite company)). Both have representatives with haemocyanin, but otherwise lophotrochozoans and ecdysozoans are only distantly related. So maybe their common ancestor possessed the proto-haemocyanin and this was passed generation to generation?

The snag with this simple story is that the proteins are completely different. Arthropod haemocyanin uses a six-fold arrangement, whereas a ten-fold configuration is the hall-mark of the molluscs. So no useful comparison, until that is we look at the active sites, where the copper binds the oxygen. Unlike the protein structures these sites are identical: two atoms of the metal, each co-ordinated to three amino acids known as histidine. Hats off to convergent evolution. But the similarities don’t end there. Another curiosity is that in both molluscs and arthropods the haemocyanins are not big, they are colossal (well for a protein, but reaching up to 107 Daltons deserves a round of applause. A Dalton? A unit roughly equivalent to the mass of a hydrogen atom).

Why so gigantic? If instead of being effectively packaged (so a single molecule can carry more than 150 oxygen binding sites) the haemocyanin was simply dissolved in the blood the required concentration would be so high as to wreck its osmotic balance. Although widespread, haemocyanin is not universal in either group. With respect to the arthropods the general mantra is that its general absence in the insects is because the oxygen enters openings on the sides of the animal and then is distributed along tiny tubes (the trachea). With such an arrangement respiratory proteins are more or less redundant. Why then do some cockroaches still possess haemocyanin? It is no coincidence that not only do they give birth to live young (in the trade this is ovoviviparity) but haemocyanin values peak in late embryogenesis. Just as mammals supply oxygen to the foetus, so the cockroach has an analogous method of transfer. Nor are the embryos the only things greedy for oxygen.

In squid a remarkable symbiosis with vibrio bacteria is central in the generation of the cold light known as bioluminescence. But this is an extremely energetic process and the haemocyanin plays a key role in supplying enough oxygen. But there is more. The squid must recruit a very specific type of bacteria, but how does it prevent unwelcome visitors? The haemocyanin doubles up as an anti-microbial agent. Such a front-line defence is a priority in all animals, and in the haemocyanin carriers there is a close link to enzymes known as phenoloxidases. These are very similar except they lack the copper. Not only do they produce highly reactive anti-microbial compounds such as hydrogen peroxide but by generating melanin can encapsulate the pesky little invaders. Some termites have taken this to an extreme, because in old age with jaws too blunt for defence they equip themselves with “backpacks” full of toxic crystals (derived from phenoloxidases) that can deliver a very nasty punch.

Any more surprises? In arthropods the process of moulting is burdensome so food reserves are highly advisable. Insects call on storage proteins (known as hexamerins), while crustaceans employ convergent equivalents (the cryptocyanins). Once again they are derived from the haemocyanin, but termites have a further trick up their sleeves because hexamerins can regulate the social castes, determining who becomes a worker as against a soldier. This versatility is impressive, but can you see a deeper pattern? “Out there”, under an alien sun, but in an oxygen-rich atmosphere exo-haemocyanin will have the same function, respiratory proteins with paired copper atoms and histidines. So too the onslaught of pathogens will meet the spear-wall of exo-phenoloxidases, whilst exo-hexamerins will ensure enough is in the larder for times of stress. The blood will run true and blue.