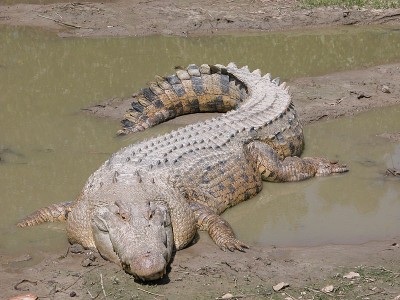 What a question! Alright, crocodiles are aquatic and who isn’t familiar with the alligators of the Florida Everglades or the Nile crocodile lurking in the rivers of Africa awaiting the unsuspecting wildebeest? And yes, dotted across the creeks and estuaries of southern Asia and tropical Australia is the saltwater crocodile (Crocodylus porosus), which also coasts along shorelines and given its distribution across the archipelagos of this region is clearly capable of marine excursions. But crossing oceans? Forget it.

Perhaps Roche Caiman (aka Crocodile Rock) is a clue, because until recently the Seychelles, far out in the Indian Ocean, hosted the saltwater crocodile, although most likely the Maldives provided a convenient stop-over point. Even so that is a lot of ocean to cross, and surely as impressive is the crocodile that turned up in the Marshall Islands, far out in the Pacific. Associated with drift-wood and a Papuan canoe, the individual probably had assisted passage thanks to a storm, but even so to turn up alive and snapping with your nearest friends 2000 km away is pretty impressive. Less dramatic in terms of distance is the curious story of a knight of the Order of St. John, one Dieudonné de Gozon. In Rhodes, around about 1311, he acquired considerable fame by dispatching a dragon. Well, and as you may have gathered I am all for keeping an open mind, it could have been a fire-eating drake with a customary interest in maidens (fried). If not, then in this case perhaps it was a Nilotic visitor in the form of a very large crocodile?

Perhaps the idea of the odd crocodile turning up very far from home doesn’t prove very much, but think again. Consider that mob (males and females) of green iguanas that debarked from a large mat of vegetation on to the shores of the Caribbean island Anguilla, an island hitherto unpopulated by these lizards. And you don’t necessarily need a raft. So much is evident from a land tortoise that staggered ashore near Dar es Salaam having departed from the Aldabra Atoll more than 700 km to the east. The beast was pretty hungry and had acquired goose-barnacles as passengers but the tortoise made a good recovery.

Such heroic stories of long-distance dispersal are more than anecdotes. They put the central premise of isolation, as Darwin’s slightly belated ah-ah moment in the Galapagos ignited the fuse to his Origin, in a new light. Most importantly they remind us that stories of plate tectonics involving chunks of continents splitting up and drifting into the wide blue yonder as they carry an ever-more isolated biota of unimaginable antiquity is dangerously close to a cliché. Let’s go to New Zealand. Is this simply a chunk of old Gondwana, with an ancient fauna and flora, isolated for tens of millions of years? Such thinking can engender an almost mythic world-picture, of Deep Time and a gratifyingly archaic feel where – lights, action – “Time stood still”. To be sure evolutionary icons like the tuatara (Sphenodon) are often wheeled out as “living fossils”, one-time companions of the dinosaurs, but to think of them having just stepped out of a time-machine is deeply misleading. This is not to deny that some of New Zealand’s biota have deep evolutionary roots: “Moa’s Ark” certainly strikes a chord. But evolution is never embedded in aspic, let alone embalmed.

Given much of ancient Zealandia was submerged in the early Miocene, then dispersal, especially from just-over-the-horizon Australia, was given the prevailing winds going to crucial when it came to re-stocking. As Matt McGlone entertainingly points out far from New Zealand being a time-capsule it was more like a fly-paper where most voyagers might sail by into the wastes of the South Pacific but every now and again there was another splat. And even now visitors like fruitbats tumble out of the sky. So too, maybe, terrestrial life was a panspermia from Mars. If so that was definitely a one-way voyage. Not so, however, with oceanic islands because although it is mostly a story of colonization and then wild evolutionary experimentation, they can also provide launch-pads such as a Hawaiian fruitfly (Scaptomyza) that hitched-hiked all over the world. So dispersal and isolation are two sides of the evolutionary coin. But now all bets are off. It is no accident that in many places saltwater crocodiles are either extinct or endangered. By intention, accident and whim we humans are radically re-organizing the biosphere. No continent is free from risk, both of extinctions and invasions. Not only do the latter far outpace the old rates, but now dispersal no longer needs to rely on ocean currents, migrating birds and a flypaper of archipelagos. Planes and ships go where trade and tourism dictate, and where stepping stones are now an irrelevance. The world has changed for ever.

Are there terrestrial mammals in New Zealand?

Yes, of course Oh dear, get a grip. Perhaps you haven’t been there? The place is swarming with mammals, not…