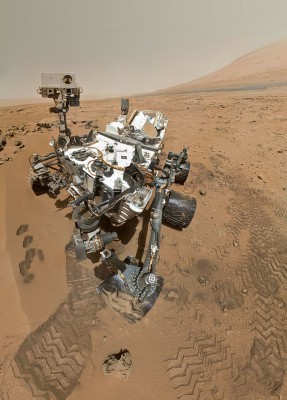 The coolest selfie of all time! On 31 October 2012 NASA’s Curiosity rover used the Mars Hand Lens Imager (MAHLI) to capture this set of 55 high-resolution images, which were stitched together to create this full-c... moreolour self-portrait. The arm is not visible because it was out of shot in the images used to make up this mosaic (Image: NASA/JPL-Caltech/Malin Space Science Systems)

I am surprised you asked the question!  The evidence in favour is overwhelming. Alright, I have to grant you that there are no credible corpses, but the room is full of smoking guns. Consider first the environmental parameters occupied by terrestrial life, what grown-ups call the phase space defined by pressure and temperature. Now superimpose the equivalent space for Mars: the overlap for viability is not only considerable but even suggests that there are nooks and crannies on Earth where life might lurk undetected.

Then there are the famous experiments connected to the Viking landers, way back in 1976. Evidence for Martian life was certainly equivocal, but if we conjure up a biochemistry that conveniently lowers freezing points and is based on hydrogen peroxide (H2O2) – and a molecule that actually is no stranger to terrestrial biology – then maybe some of the results obtained from the chemical equipment carried on board the Viking Landers make better sense. Then there is the methane (CH4). On Earth nearly all this gas is produced biologically (and not just from eructating cows), so surely in the atmosphere the attenuated plumes of Martian methane are a sign of life at least ticking over. Rocks often contain fossils, so let’s check our substantial collection of Martian meteorites, especially one collected in the Allan Hills of Antarctica (ALH 84001). In the eyes of some investigators tiny worm-like structures might be equivalent to so-called nano-bacteria, whilst minute crystals of iron oxide (magnetite) are suspiciously similar to those constructed on Earth by magnetotactic bacteria.

And what about the fantastic resilience to intense radiation and extreme desiccation shown by the terrestrial microbe Deinococcus? Isn’t the best explanation that this bacterium went to school on Mars and hitch-hiked to Earth on a meteorite? If so, it happened billions of years ago but no matter. As Mars lost most of its atmosphere and relentlessly spiralled into the deep-freeze, the sturdy microbes retreated into the deep crust, nursing a trickle of geothermal heat and letting out the odd puff of methane. They await our arrival, the genuine Martians.

Hope springs eternal. Mars is dead as a door-nail. Detecting Martian methane has proved a tricky business, although when the NASA rover Curiosity took a sniff it did detect the gas in parts per billion. It is tantalizing rather than definitive and in any event the methane could be of abiotic origin. So too both its very short residence time in the atmosphere and its role in atmospheric chemistry of Mars don’t make much sense. What about the Viking experiments and meteorite ALH 84001? See the judge lean forward. “You say there is evidence for life? Harumph, I must say I find the closing statement of m’learned friend exceptionally weak”.

To say the jury is still out is an understatement. Deinococcus as a Martian immigrant? Neat idea, but its biochemistry isn’t remotely alien and its phylogenetic position says “Made on Earth”. Alright, I will concede one point. Very early in its history Mars was wetter, maybe even had an ocean, and possibly was warmer. If life secured a foothold it had bought a ticket on a planetary Titanic. As Mars’ magnetic field failed so the surface was blasted with radiation, as the geothermal gradient declined the huge volcanoes like Olympus Mons stopped erupting, as the temperatures plummeted the rivers dried up and King Permafrost arrived. If there was ever life it declined, blinked and vanished. 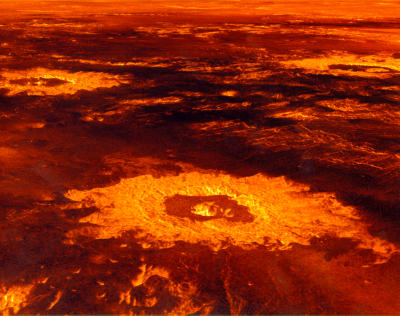 Known as the “Crater Farm” this image is constructed from radar data from the Magellan spacecraft. It shows three impact craters on the surface of Venus. Venus has extremely thick cloud cover, a toxic atmosp... morehere, and a temperature of around 480 °C. Probably not an ideal location for a weekend break, and besides, the public transport can be rather intermittent (Image: NASA/JPL)

Maybe, however, there is an escape clause, or vehicle? Early Earth was a pretty torrid place and life was probably wiped out repeatedly as a series of colossal impacts released enough energy to boil off the entire ocean. Mars got off more lightly, and let us suppose that there life did indeed emerge. If one looks at the interplanetary traffic of rocks blasted off one planet and in due course (and sometimes remarkably quickly) arriving on one or other neighbour, then the figures are not only impressive but as importantly any freight of bacterial would have little difficulty in surviving the journey.

So maybe we really are Martians? Certainly a Mars to Earth ticket is cheaper than the reverse journey, but it is not impossible that a newly arrived Martian promptly found itself hurtling back to its home planet. Broadcast of life across the wastes of space goes by the name of panspermia. An idea long out of fashion, the likelihood of chunks of meteorites (or even comets) carrying bacterial cargos around the inner solar system, and occasionally much further afield, suggest at least Mars, Earth and Venus would have had more than a nodding familiarity.

In due course Mars pulled out of the race, but what about Venus? Now the surface is an inferno, but what might have happened as the runaway greenhouse kicked in? Head for the hills, as they say. The higher you go, the cooler it gets, but before long even the top-most peaks are too hot to touch. Next step, therefore, is to convert into aerial plankton, ultimately finding a niche in the thick cloud layers where at about 50 km height the pressure and temperature are more than tolerable. To be sure otherwise it is pretty brutal, with intense acidity (fancy swimming in sulphuric acid?) and very little water.

Yet, terrestrial extremophiles remind us of what is possible, so an ecology based on sulphur and able to scavenge water is by no means inconceivable. And there are other hints that it is to Venus rather than Mars that we should turn our attention. The atmospheric chemistry is not in equilibrium: where, for example, is the carbon monoxide? Anywhere else this would be a strong hint for the presence of life shifting the balances of the various gases. Another mystery of the Venusian clouds is that they are rich in ultra-violet absorbing compounds. Probably they are some sort of chemical, but could they conceivably be microbes, shielding themselves from the Sun’s radiance? And even if we originally came from Mars, even today maybe Venusian aerial life wafts its way across the 25 million miles or so of space that separate us? Unlikely? Most certainly! Impossible? Perhaps not.