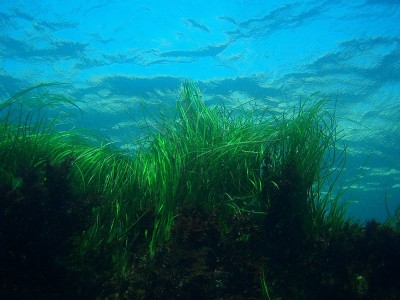 Excuse me, did you say aquatic plants or aquatic flowers? No shortage of the former, think of water-lilies or rushes, but flowers functioning underwater? That’s a tall order and it is easy to see why. Flowers may look pretty, but let’s face it their function is sexual, even if this can lead to some pretty serious deceptions. To the first approximation it is a very well worn track, the trick being to transfer the pollen (equivalent to male sperm) to the waiting female ovule. Boy may meet girl, but the path is convoluted because the pollen have to alight on a convenient landing-pad (the stigma) before the heroic effort of growing an enormous (relatively …) pollen tube that allows fertilization. But before that to all intents and purposes transport of the pollen is either by the wind or animals, especially insects.

Now consider the challenges of flowering under water. First of all there are effectively no marine insects (although one suggestion is that crustaceans may step in), let alone analogues of other pollinators such as humming birds or nectar-feeding bats. Alright fish can farm, but they certainly don’t go round pollinating their crops. So, if not animals, can water currents substitute for the wind? Very tricky. Water is much denser and moreviscous than air, so that seems to be a non-starter. Let’s face it: evolution can do some pretty remarkable things, but you have to draw the limit somewhere.

Time for a trip to the lagoon, where waving in the waves are meadows of sea-grasses, perhaps being peacefully grazed by dugongs. Here are flowering plants that spend every moment of their lives submerged, from germination to flowering to seed dispersal and so back to germination. The special challenges of living in the sea have been triumphantly resolved with the unisexual flowers adapted to the flow regime of a fluid much more viscous than air. No longer spherical the pollen are filamentous, no doubt conferring a tumbling motion that helps them to collide with a receptive stigma. And what of seed dispersal? Ingeniously the seeds are counter-weighted, using granules of starch, and shortly after settling tiny hairs help attach them to the lagoon floor before the roots emerge to ensure a long-term tenancy.

Living in a salty fluid represents another challenge, although the genetic changes that shift the physiology still await full exploration. Being plants the sea-grass are photosynthetic, but here is another snag because the amount of sunlight absorbed by the water depends on its wave-length. That incidentally explains why if you bleed underwater your blood will look green rather than red. Plants may not bleed, but because water absorbs the red end of the spectrum much more efficiently than the shorter wave-length blues the sea-grasses are potentially in deep trouble. This is because red light plays a key role in plant life, including triggering germination. Yet to be discovered is exactly how sea-grasses have overcome this hurdle.

Alright you win, but surely sea-grasses are a quirk, the exception that proves the rule? Think again. Not only has this strategy evolved at least three times in the group to which they belong (botanists call them the alismatids), but they are not alone because several other flowering plants have become wholly aquatic and as importantly evolved similar strategies. These pollen often lack the outer wall (the exine) and begin to germinate before landing on any stigma, presumably to increase the chances of ultimate interception. Far from being an arcane curiosity, these plants rise to the challenge of evolution. Granted they will never live in clouds, but growing in the company of sharks is pretty impressive.

No, don’t be ridiculous Everybody remembers the lines by Wordsworth: “I wandered lonely as a cloud/That floats on high o’er…

The SETI Institiute, dedicated to the Search for Extra-Terrestrial Intelligence, is a research organisation aiming to ‘explore, understand and explain…