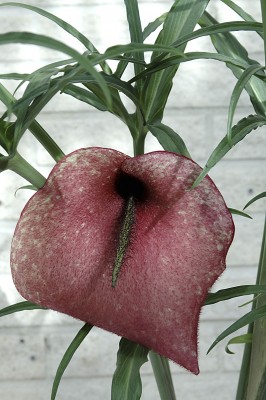 Picture the scene. “Darling, I’ve been a perfect fool”.  The acceptance – albeit with a curt nod – of a bouquet of flowers is promptly followed by a shriek: “You b*****d, they’re hot and the smell is appalling ….”.  Understandable in the heat of the moment, but why has the planned reconciliation gone pear-shaped?  Warm-blooded plants?  Granted plants and animals aren’t totally different.  Both have vascular systems, although rather than transporting blood it is the flow of water (in the xylem) and sugary fluids (in the phloem) that nourish the plant.  Sex may be seldom out of our minds, but it still comes as a shock to see flowers as merely beautiful genitalia.  Perhaps as disturbing is to listen to plants chatting as they exchange chemical information and warnings.  Some people talk about plant “intelligence”, but one has to draw the line somewhere.  Hot plants?  About as likely as a flying kangaroo.

What is that horrific odour wafting through the air? Rotting carcasses, dog poo, cat pee are only some of the unexpected smells you can encounter in a stroll through the glades.  Swiftly you change direction, but not the insects.  They are making a proverbial bee-line towards the source of corruption.  Anticipating some noisome discovery the source of the volatiles are actually plants, engaged in ingenious chemical trickery in order to recruit pollinators.  As the insect approaches other forms of mimicry come into play with vivid pustules and lurid purples providing further encouragement.  So far as the volatiles are concerned, not all smell repulsive.  Some are sweet, and others are disarmingly similar to insect sex-pheromones.

But how to disperse these fragrances more rapidly and when the insects arrive ensure a comfortable and truly enjoyable visit?  The answer is simple: turn yourself into a natural radiator.  The trick of developing heat-generating tissue has evolved many times, not only amongst the flowering plants but also the one-time companion of the dinosaurs, the cycads.  Curiously amongst the former many are relatively primitive and include the sacred lotus, magnolias, palms, but especially the arum family (botanists salute the Araceae).  Given their propensity to emit pungent volatiles it is little surprise they end up with names like the Skunk cabbage and Dead-horse arum.  Some thermogenic plants are also enormous, such as the 3-metre-tall titan arum, not to mention the immense flowers of the parasitic Rafflesia that erupts from its host in the depths of the Sumatran jungle.  The signal to rack up the heat depends on salicylic acid (the cure for headaches), but there is a diversity of ways in both the amount of heat generated and the timing.  In some species the increase in temperature is a modest degree or two, but in one arum (Philodendron) the temperature can reach a whopping 46oC.  Occasionally the “furnace” runs uninterrupted for days and remarkably as the surrounding temperatures fluctuate so the plant regulates its own temperature.

More often there are discrete bursts of thermogenic activity, coinciding with different stages in the plant’s flowering.  To keep the metabolic fires burning the plant needs plenty of oxygen but lacking lungs this might seem a bit of a challenge.  Not really, because an abundance of tiny openings (stomata) allow the vital gas to diffuse into the thermogenic tissues.  Species by species the details differ, but a recurrent method is to release a blast of warm volatiles to bring the visitors flocking in.  Flies lead the rush, but beetles show an inordinate fondness for thermogenic palms and magnolias.  The central objective is to ensure the visitors fertilize the female flowers and/or arrange things so that the departing guests receive a dusting of pollen before they fly off in search of more female plants.  In Australian cycads one set of volatiles attracts thrips to the pollen, but a different blast sends them off in search of a female flower.  Not infrequently the timing between pollen production and female receptivity requires a temporary imprisonment in a floral chamber, but if so the insect’s time is not necessarily wasted.  In the toasty-warm environment they can take the opportunity to mate, lay eggs or feed on tissue thoughtfully provided by the plant.  Some plants recruit a variety of pollinators, but in other cases only a single species of insect will serve making animal and plant utterly interdependent.  Heat can also assist the plant, especially with early flowering when snow may cover the ground.  Without the warmth processes, such as pollen maturation, might otherwise be jeopardized.

My companion is mollified. “Well your “present” did take me by surprise.  What a story!  Isn’t it funny how evolutionary biologists find it so difficult to distinguish woods and trees?  It’s the general principles that matter”.  And that applies to any thermogenic organisms: plants, animals, even bacteria.  Usually the centre of activity are the respiratory organelles (mitochondria) and specifically the cytochrome-based electron transport chain that burns metabolic fuels (like sugars or fats).  Normally the resultant energy is stored in the ATP, but if this process (by so-called “futile cycling”) is derailed then heat is released.  In mammals, such “sabotage” depends on the aptly named uncoupling proteins (UCPs).  Plants use much the same mechanism, although to frustrate the normal respiratory pathway they usually employ AOX (alternative terminal oxidase).  Going full-pelt a thermogenic plant can produce as much heat as a flying hummingbird or sphinx moth.  In principle any tissue can produce heat, but flight muscles are a particular favourite.

In insects thermogenesis assists not only pre-flight warming (in bumblebees) and walking (for dung beetles), but even singing amongst the cicadas.  Although breezes, or for that matter gales, will strip an organism of its heat the challenges of living in water (where thermal conductivity is an order of magnitude greater) are more severe.  Whales opt for blubber, penguins for feathers, but a favourite trick is to devise a network of blood vessels (biologists speak in awe of the rete mirabile) so that heat making its way to the chilly extremities is clawed back to the warm interior.  Independently tuna and some sharks have devised this system and it is no accident that their thermogenic-based success allows them to dive deep into freezing waters and migrate rapidly across enormous distances.  In the billfish thermogenic muscles, recruited from ones that otherwise would swivel the eyeball, find a more extraordinary use.  When hunting in deep, cold waters not only does this enhance powers of vision, but by warming the brain it allows snap decisions rather than engaging in a glacial pondering.  The sunless ocean abyss seems a million miles from the Mediterranean islands where the Dead-horse arum disperses its repulsive scent, but the shared principles of thermogenesis warm the cockles of the scientific heart.