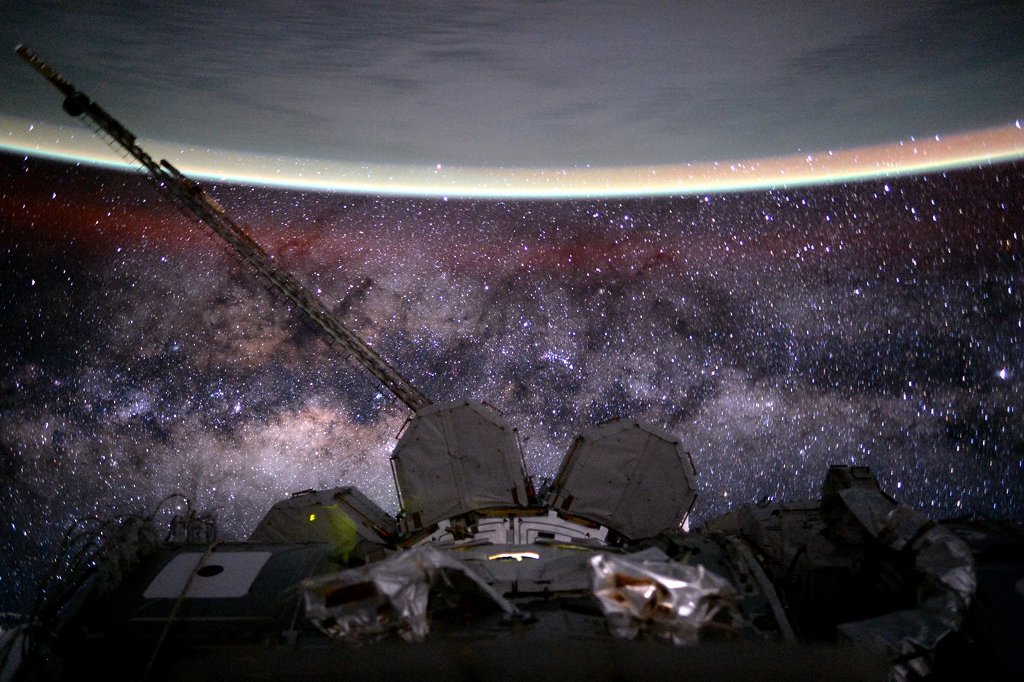 Earth and the Milky Way as photographed by astronaut Scott Kelly on 9 August 2015 from the International Space Station (Image: NASA/ Scott Kelly)

Three hundred million years ago the stars wheeled above the Carboniferous lagoons and coal forests, but did the early reptiles and insects register the night sky as anything other than cosmic wall-paper? The aeons roll by, old constellations dissolve and new ones slide into position, but otherwise has anything really changed? The Moon continues to inch away from the Earth, but locked in a tidal embrace its phases can never change: from the darkness of the new Moon, to the heart-catching hangnail of the first crescent and two weeks later a simulacrum of daylight.

So too the galaxy may rotate but the Milky Way formed the same river of starlight above the heads of dinosaurs as it does for ourselves. But only we humans find meaning in the heavens, be it with the many mythologies of the Milky Way or joining the stellar dots and so populating the Zodiac with twins, hunters and animals. When heroes and immortals take their preordained places across the celestial realm, so too chosen stars – mighty Aldebaran, glittering Sirius the dog-star – serve as beacons, here guiding the three Chaldean seers to that strange meeting in Galilee, there guiding the oceanic diasporas of the Vikings and Polynesians. Navigators, astronomers, even astrologers, all seek knowledge from the sky, but dung-beetles? Get a grip; you must be joking.

Maybe you need a sense of humour to be a dung-beetle, not least in those noctural species where the cosmic and comic collide. To the dung-beetle a steaming pile of elephant faeces represents a red-letter day, but this is a view shared by their neighbours as they all scramble to roll away their prizes with the maximum dispatch and minimum of interference. Best to set off at a smart pace and in a straight line. In the day time navigation should hardly present a problem, but in the pitch-dark of a moonless night isn’t the dung-beetle as likely to career around in ever diminishing circles? Not at all. Like a number of other insects dung-beetles are perfectly capable of moving confidently in starlight and they specifically use the Milky Way as a celestial guide. Nor are they alone. Shore-crabs, for example, have eyes quite sufficient to see a few of the brightest stars, while animals like bats and seals do even better and have a skeletal view of our familiar constellations.

Nobody supposes that animals using the night sky know that stars are distant suns, let alone that the carbon in their bodies comes from the thermonuclear furnaces of a stellar interior. No more do they realize that the Moon is a result of a colossal collision at the dawn of the Solar System. Airless and as dead as a doornail, nevertheless if there were no moon then all our lives would be very different. Not simply in terms of a convenient nocturnal illumination but far more vital roles such as maintaining the axis of the Earth at a near-constant 23o and so conferring a welcome stability denied to planets like Mars.

Not only do the heavens very much impinge on the Earth, but the stars and Moon are vital for those animals that engage on nocturnal excursions, be it a short hop through the jungle or a migration of thousands of miles. Not, of course, that celestial beacons are the only cues. In birds and moths the Earth’s magnetic field provides a reference grid allowing the rotations of the stars to be mapped out and thus serve as a reliable compass. With the stars, of course, their patterns are fixed. Not so the Moon. Yes, it has the advantage of being by far the brightest object in the night sky, but that is only for a few days around full Moon. As it waxes and wanes through the lunar month there are dramatic changes in overall shape and degree of illumination. To complicate matters further the times of its rising and setting also constantly shift. In fact, the Moon might seem to be a pretty useless celestial compass.

Not, however, if you are a sandhopper, where movement to and from areas of moist beach sand is a matter of life and death. In the day the Sun is the focus of attention, but as night falls the Moon adopts the same role. These tiny crustaceans not only employ internal clocks (circadian and lunar) but by mechanisms still obscure continue to navigate with confidence even during the interval of moonless nights. Yet there are greater surprises in store. As the Sun’s light scatters across the sky so it becomes polarized. This, as it happens, provides a vital aid to the navigation of insects such as the bees. The same physical principles apply also to moonlight, but even at full moon it is a million times dimmer than the Sun, while as the Moon wanes so the intensity of the polarization falls another hundred-million-fold. Surely this is far beyond the limits of detection for any animal? Not if you are one of those nocturnal dung-beetles; to them the sky is full of celestial pointers.

That animals respond to the Moon in such matters as mass-spawning in the oceans is common knowledge. Other connections are equally intriguing. Consider a plant known as Ephedra. Most species rely on wind-pollination. A few, however, employ insects, but only at full Moon. Most likely the flood of light assists these nocturnal visitors, but as an added attraction the plant secretes pollination droplets that shine like diamonds. There is indeed something wonderful about moonlight and as a harvest Moon swings clear of its moorings the heavens seem to touch the Earth.

Folklore is rich in stories of lunacy, but are they entirely fanciful? After all, the tidal forces set up by the Moon influence the growth of plant roots. Could this spill over into the secretion of hormones or other subtle effects on cells, tissues or even entire bodies? When it comes to humans, opinions – and statistics – are sharply divided. Correlations between the full Moon and peaks in crime (in India) and extreme behavioural outbursts (in Australia) suggest a baleful influence. Hospitals also report a marked increase in the number of admissions from animal bites. Others, however, find no such connection with the full Moon and the reports have headlines such as “Barking mad”. On yet wilder shores watch how allotment holders and vineyard owners faithfully follow the principles of biodynamics, convinced that failing to consult the night sky before planting their crops is the height of folly.