Are dead animals ever alive? 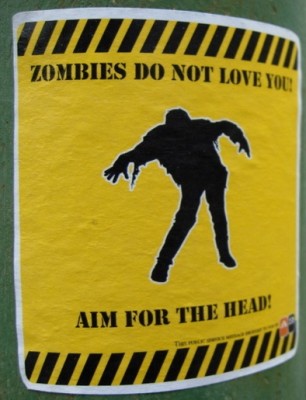 Simple answer: never.  Alright, maybe in the recesses of some old-fashioned museum the stuffed tiger  looks as if it might carry on leaping, or perhaps in one of those slightly creepy Victorian glass domes the brightly coloured birds will mysteriously begin to stir and then flutter back into life.  Dream on.  Like undertakers, taxidermists known what they are doing.

It’s an impressive display.  The hognose snake is making it abundantly clear that you had better clear off.  First a series of lunges, then it rears up and expands its neck in an alarmingly cobra-like fashion.  Nevertheless, despite its hisses you advance.  Suddenly the snake collapses, goes belly-up, blood dribbling from the open mouth and something even more unpleasant from the other end.  Good gracious, it has died of shock.  Sadly you depart, but on an impulse you return to the scene.  The snake has vanished.  Just pretending, this snake is a master of death-feigning.  As soon as the coast is clear the “dead” arise and make a speedy exit.  This trick, which biologists call thanatosis (or tonic immobility), is remarkably widespread, even if the marsupial opossum is the classic example with its characteristic posture, limp body and eyes staring.  Try closing the eyes or rearranging the body, and the animal will insist that it is the better judge of what a “dead” opossum is meant to look like.

Animals as different as mites, crabs, fish, frogs, lizards, birds and mammals can convincingly feign death.  Most often it is in response to a predator, although exactly why a hungry animal should be persuaded that its prey is suddenly of no interest, if not actually inedible, is often far from obvious.  Yet sometimes the logic is clear.  If a lizard tries to bite a large species of earwig, the saliva the insect produces smells like rotting meat.  The lizard quickly decides it has better things to do.  Another example of an insect playing possum involves certain beetles.  Their preference is to move into ant nests as long-term and non-paying guests (in the trade inquilism).  But how to get past the guards and into the fortress?  Why not transform yourself into a “corpse” and allow the ants to drag you into their lair?  In a grasshopper the sprawling death-posture is far from realistic, but it is an arrangement that deters it from being swallowed by a frog.

On the other hand, watch that cichlid fish gently descend towards the bottom of Lake Malawi, apparently in the early stages of decay.  Appearances are misleading because when another fish sees only a tasty morsel it is in for a fatal surprise.  Half-way across the world, in Yucatan, another cichlid performs much the same trick.  It is, however, the sexual arena where thanatosis enters the strangest territory.  Being a male pisaurid spider is not without its risks, especially when after copulation the female decides to eat you.  How to avoid the grisly fate of sexual cannibalism?  First, it is a good idea to turn up with a so-called nuptial gift.  Something wrapped up in silk will serve as a convenient distraction.  If, however, things get tricky just pretend to drop dead, although don’t be surprised if your mate then drags you around.  When things have calmed down then the “corpse” cautiously revives.  With a robber fly, however, the tables are turned.  Boy meets girl in mid-air, but if the female isn’t interested she promptly drops “dead”. 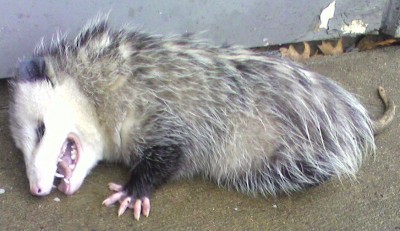 To paraphrase Monty Python, this opossum has “kicked the bucket, he’s shuffled off this mortal coil, run down the curtain and joined the bleedin’ choir invisibile!! THIS IS AN EX-OPOSSUM!!” But h... moreang on, it’s just a case of thanatosis, the opossum is just pretending to be dead. Now, there’s an alternative happy ending for the Python’s Norwegian Blue (Image: Johnruble/Wikimedia Commons)

Thanatosis may be widespread, but what is the advantage in being potentially so vulnerable?  Fight or flight as they say, but in final analysis a fake death may have its merits.  Jumping spiders hunt red flour beetles, but those that flee are actually at greater danger than their immobile neighbours.  So too, when a colony of fire ants are attacked, the old flee, the mid-age slug it out and the youngest drop “dead”.  Not only are they less armoured, but hopefully they have a whole life in front of them.  Not only that but in some cases thanatosis can be shown to be heritable, reinforcing the view that it is adaptive.  Thus, female hognose snakes remaining “comatose” for longer periods than the males, presumably because of their reproductive investment.

On the other hand, having enjoyed multiple matings male weevils remain “dead” for a shorter interval, perhaps because duty done they can afford to take more risks.  Dropping dead does necessarily not guarantee safety, but in such cases as foxes capturing ducks more than half the victims survived.  Thanatosis, however, raises two more significant issues.  First whatever it is, it is neither death-like nor some sort of hypnosis.  Despite being belly up, legs in the air and so on, the death-feigning animal remains fully alert, carefully judging when it is safe to slip away.  Thanatosis evidently involves complex neural activity, and even though the seat of action seems to be concentrated in the “lower” regions of the brain (at least in vertebrates), the “dead” animal is making literally life or death decisions.  In these circumstances what role might cognitive processes play?

There does, however, seem to be some sort of correlation between intelligence and thanatosis.  For example, the latter condition is easy to induce in rabbits, but much less so in rats.  Indeed the whole area can descend into party tricks as beasts like hens and guinea-pigs are readily coaxed into immobility.  Second, enthusiasts for evolutionary psychology see a seamless connection between thanatosis and cases where severely traumatized humans feel so entirely helpless that they totally freeze.  This process is automatic and outside conscious control, but too often victims of rape are falsely informed that they should have fought back.  Whether or not an evolutionary link exists between animal thanatosis and extreme fear in humans is moot.  A mysterious interface exists between our powers of imagination and the inducing of extreme terror.  Consider, for example, bone-pointing and other examples of so-called “Voodoo death”.  By incantation or other means the victim rapidly succumbs, and all this despite the best medical aid.  Nor is this strange power absent from the modern world.  In war soldiers and airmen may suffer a traumatic shock but little, if actual, injury.  Yet shortly after shock sets in; despite all assurances the prognosis is often bleak.  Death may indeed be the country from which no man returns, but getting there is not with its moments.

No, don’t be ridiculous Brainless, nerveless, is anybody seriously going to ask if sponges have eyes? Lacking even a gut…